Battle of the bulge 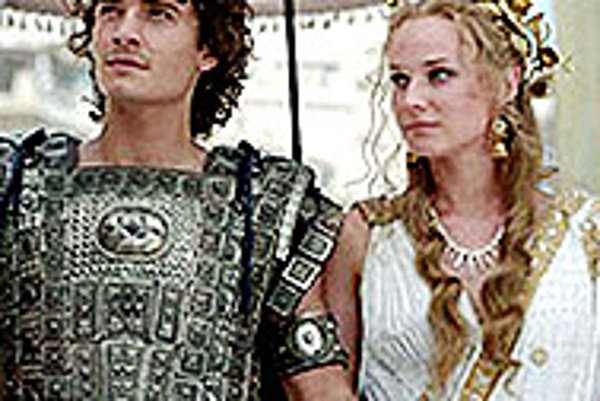 WHAT comes to mind when we think of the ancient Greeks? Philosophy. Tragedy. Polytheism. Nude bodies, glistening with sweat, running and throwing javelins. Greeks invented the ultimate celebration of human physical prowess, the Olympic Games, which were famously performed in the nude. When the Olympics return to Greece this summer, it's unlikely that this tradition will be followed. Fortunately, Troy comes just in time to remind us what it's really all about.

Because this war was apparently the largest ever seen at that point, some pretty weighty issues are at hand: Immortality, Mortality, Honour, Love, the "Will of the gods". But these things are mere distractions from what really matters: Beauty. It's ostensibly what began the war and what keeps it going... and going.

An awful lot of bloody action and high drama are packed into the movie's nearly three-hour running time. But the real focus is not the killing so much as the killing machine: the mighty Achilles (Brad Pitt). He may passionately despise his leader, Greek King Agamemnon (Brian Cox), and therefore have little interest in helping him destroy the Trojans. But Achilles has a drive to be remembered by history as well as a temper that, when flared, can have disastrous results for all around him.

So he does what he does best: kill people and look great while doing so. Pitt is a famously beautiful man. Here he's one big mass of rippling, perfectly sculpted muscles. During the fighting, these muscles are largely covered - by armour, a tank-top, and a mini-skirt.

But at night, following a hard day of running, slicing, and stabbing that's left him covered in sweat, blood, and dirt, he's anxious to air out. To further encourage his disrobing, Briseis (Rose Byrne), a pretty young Trojan virgin (well, at the beginning of the movie at least), often awaits him.

Given what he has to work with, Pitt manages to be mostly likeable, even as he's forced to deliver atrocious dialogue in a highly questionable English accent.

As Prince Paris of Troy, Orlando Bloom gives further evidence that he's nothing more than a pretty face. Helen (Diane Kruger), who started the war by betraying her husband to run off with the young prince, seems there only to look incomparably beautiful. She succeeds.

Only Byrne and Cox overcome the paltry material. Byrne injects some spirit into her confining role as Pitt's love interest, while Cox is gleefully evil, adding some much needed intentional humour to the proceedings.

The rest of the cast is appropriately muscular, appropriately pretty, or appropriately old and wise. But not particularly remarkable. This is essentially what can be said about the film itself. There are some pleasures to be had, but they're never anything more than awe at someone's physical beauty or enjoyment at how ridiculous a particular scene is. Basically, it's just a bunch of pulsating pectorals and pretty faces.