THE LATEST brainchild of Economy Minister Pavol
Rusko, the idea that the Slovenské elektrárne power producer be sold to an investor who would complete two
blocks of the nuclear plant in Mochovce, has evoked fiery debate in business, environmental, and even
diplomatic circles.
Safely backed by his party the New Citizen's Alliance, Rusko said that the completion of the blocks is in the
interest of Slovakia's power self-sufficiency. 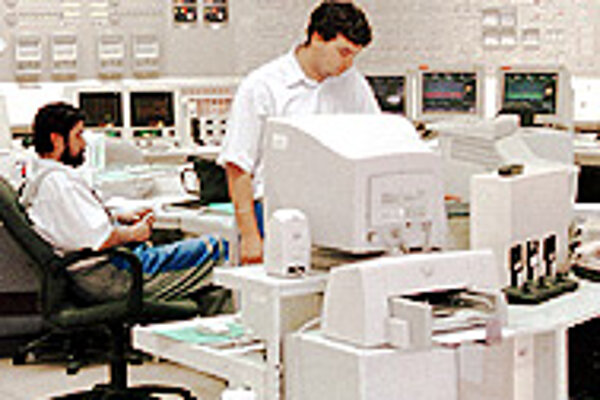 Font size:A-|A+0
THE LATEST brainchild of Economy Minister Pavol Rusko, the idea that the Slovenské elektrárne power producer be sold to an investor who would complete two blocks of the nuclear plant in Mochovce, has evoked fiery debate in business, environmental, and even diplomatic circles.

Safely backed by his party the New Citizen’s Alliance, Rusko said that the completion of the blocks is in the interest of Slovakia’s power self-sufficiency.

However, Rusko’s ruling coalition partners, who had not been informed of the minister’s plan, have remained rather reserved about the initiative.

Hungarian Coalition Party boss Béla Bugár said the coalition must be professionally prepared for any debate on Mochovce, located near Levice in the Nitra region.

Rusko based his main argument for completing Mochovce on a study by Deloitte&Touche that showed that the investment could pay for itself in eight to 12 years, the Economy Ministry said.

The study warns that if the blocks are not finished, electricity prices for firms and households in Slovakia could rise as a result of importing power.

A supplementary study by the Bratislava-based Centre for Nuclear Safety says that non-completion of the blocks could lead to a “significant environmental risk”, the news wire TASR wrote.

Austria, Slovakia’s environment-conscious neighbour, has restated its position in opposition to nuclear energy and expressed concerns about the efficiency of nuclear waste management in eastern Europe.

“We think that nuclear energy is potentially very dangerous and in the worst case scenario it could have horrible trans-border effects, especially in central Europe, which is densely populated. There are the unsolved problems of nuclear waste management and storage. We are naturally sensitive to these issues in Austria, due to the various plants close to the Austrian border in neighbouring countries,” Marian A Wrba, deputy of the Austrian Ambassador to the Slovak Republic, told The Slovak Spectator.

As to the question of whether the eventual completion of Mochovce would have any impact on Slovak-Austrian relations, Wrba said that, “at this point it is not the Slovak government’s decision whether or not to complete Mochovce. There is the debate initiated by Rusko, which centres around the privatisation of SE and hypotheses on the possible developments of the European energy market with supply-demand forecasts that remain speculative. Naturally there are Austrian comments on this debate.”

“It is the sovereign right of the Slovak Republic to pursue its own energy policy. There is no doubt about that. As for Mochovce, we are convinced that Slovakia will continue to respect the obligations stemming from the EU membership, including the observance of fair competition rules and the state subsidy law, which curtails further subsidies for the Mochovce investments,” Wrba said.

The European Commission said it might not dictate energy policy to Slovakia or any other EU country. The EC also believes that Slovakia will keep its obligation to decommission two blocks of the Jaslovské Bohunice nuclear power plant in 2006 and 2008.

In 2000, the Slovak cabinet decided against completing the two blocks with state money.

Slovak Finance Minister Ivan Mikloš said that the government still prefers the principle of private funding if a project is economically advantageous. He said Slovakia should not make pledges to spend public money or give other guarantees.

Estimated costs for the completion would come to Sk50 billion (€1.2 billion), TASR wrote.

Though the opposition agrees with Rusko’s claim that Mochovce needs to be completed, Robert Fico, the leader of the Smer party, has complained that Rusko stole his “issue”.

“Rusko appeared on Markíza and talked about Mochovce as though he invented the steam locomotive,” Fico said.

Fico has been a strong advocate of the completion of Mochovce and the topic has been on his party’s agenda since 1999.

In November 2001, Fico completed a lobbying trip to Russia. He met Russian Minister for Atomic Energy Yevgeni Adamov, Minister of Industry Alexander Dondukov, and Alexander Avdejev, the first deputy of the Russian minister of foreign affairs.

Fico, harshly criticised by the ruling coalition, said it was the completion of the plant that brought him to Moscow, and that he could not accept the cabinet’s argument that it does not have the money to do so.

According to the daily SME, at least two of the potential investors are ready to meet the unofficial condition for the privatisation of SE, which is the completion of the nuclear plant.

The Russian company RAO UES International, bidding for a 66 percent stake of SE, is prepared to complete the third and fourth blocks of Mochovce, Andrei Rappoport, the head of the Russian company’s board of directors, told the press on May 25.

The company wants to complete Mochovce even if it is not a condition of SE’s privatisation, the news wire SITA wrote.

RAO, which considers Slovakia the first step in its expansion, wants to enter the privatisation process in a consortium. Rappoport refused to specify the partner.

Last week, Rusko implied that he would not support privatisation at any price “just because we want to get rid of it. It will depend on the offers.”

The construction of Mochovce started in the midst of the communist regime. The facility uses VVER-type Russian reactors with a Western safety system supplied by the German company Siemens and French firm Framatome.

The first unit was put into operation in 1998 and the second unit followed a year later. Originally, four units had been planned but after the second was completed, the government would not provide a guarantee for loans for the construction of the remaining two.

In accession negotiations with the EU the Slovak government pledged to decommission two blocks of the V1 nuclear power station in Jaslovské Bohunice in 2006 and 2008.