SLOVAK Intelligence Service (SIS) chief Ladislav
Pittner presented the service's annual report, which discussed issues such as terrorism, corruption, illegal
migration, and organised crime, to a closed parliamentary session last week.
Asked by journalists on May 21 whether Slovaks could feel safe in their country Pittner offered an ambiguous
comment.
"Yes and no. It is relative," he said. 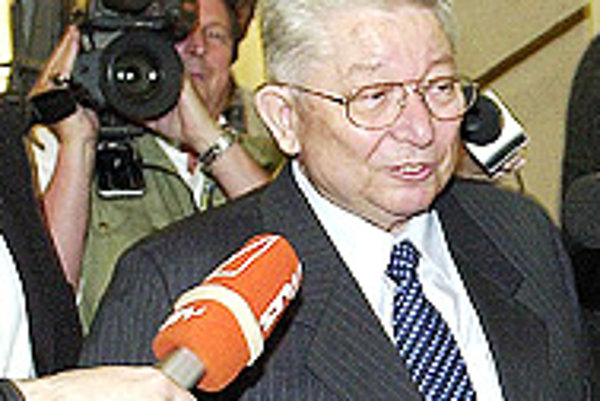 Asked by journalists on May 21 whether Slovaks could feel safe in their country Pittner offered an ambiguous comment.

The SIS has undergone several major personnel changes, most notably the replacement in spring 2003 of SIS chief Vladimír Mitro by Pittner, the former interior minister of Slovakia.

Mitro’s removal followed a string of scandals surrounding the SIS, including the alleged illegal wiretapping of the Slovak daily SME, and allegations made in a series of critical stories published by the British magazine Jane’s Intelligence Digest.

The stories suggested that the SIS was involved in illegal arms trading, had contacts with former KGB agents, and recruited journalists.

“SIS activities were negatively influenced by several media reports as well as behaviour by the SIS that raised the suspicion of links to illegal activities,” the report said.

It then added, “Even honest efforts and various measures approved by SIS leaders aiming to improve the quality of its activities and to strengthen the mechanisms of its public control were often misinterpreted.”

The report said that as of January 1, 2004, not a single former member of the communist secret service ŠtB worked for the SIS.

“This principal change ... has not been adequately addressed. Various Slovak state institutions, including those active in the area of defense and safety, have thus far not dealt with this issue.”

To fill the recently opened SIS positions, the service ran a large recruitment campaign in 2003, with more than 3,000 people applying. According to the report, “hundreds have been chosen to enter the recruitment process.”

Last year the SIS worked with what it suggested was a modest budget of just over Sk1 billion (€25,000). “Six years ago the SIS budget was a quarter larger,” the report said.

Personnel and budget matters aside, the SIS report also listed information regarding various criminal and terrorist groups that, according to the service, were operating in Slovakia or whose operation had an impact on Slovakia. It mentioned information about illegal migration, drug trafficking, and foreign spies in Slovakia, but approvingly noted the increased cooperation of the SIS with the NATO peer services as Slovakia prepared to join the alliance early this year.

With regard to terrorism, the report said, “of the collected intelligence information it is evident that terrorist organisations linked to Al-Qaeda are increasing activities that have an impact on the interests and territory of Slovakia.”

The SIS collected information in 2003 indicating that persons close to extremist Islamic groups such as Hamas and Hezbollah were active in Slovakia.

The SIS found that foreign intelligence services were active in Slovakia, mainly including people from the former Soviet states and North Korea.

“The goal of the given activities was gaining positions that would secure these intelligence services with a direct source of information relating to Slovakia and its cooperation with NATO and the EU,” the report said.

Slovakia is still being used as a transit country for illegal migration, and international smugglers linked to organised crime groups were operating in the country according to the SIS. Albanian organised crime maintained its status as the prime beneficiary of the drug trade in Slovakia.

The SIS also warned of cases pointing to ongoing siphoning of funds from state and budgetary organisations, cronyism and corruption, various tax and customs frauds, and disadvantageous privatisation of state property, citing the privatisation of the bus companies (SAD) as an example.

“Two SAD firms were probably privatised by firms linked to the underworld,” the report said.

Other firms, unnamed in the report and active in Slovakia, are owned by criminal groups from Slovakia, Ukraine, and other former Soviet Union states.

According to the Slovak daily SME, Police Vice President Jaroslav Spišiak said that the police were dealing with these allegations.

After hearing the report, many MPs, including the head of the parliamentary security committee, Robert Kaliňák, of the opposition party Smer, said that it could have been more specific in its findings, and should have been presented publicly.

Tibor Cabaj, an MP for the opposition party Movement for a Democratic Slovakia, said that the report “did not make me feel like the country is under immediate threat.”