First car rolls out in January 2006

THE FIRST car produced in
PSA Peugeot Citroen's new plant in Slovakia should leave the factory gate in January of 2006. So far, the
construction works and recruitment process for the French carmaker are progressing on schedule. The first
production hall should be finished in late summer this year.
The plant near the western Slovak town of Trnava will become one of the greatest investments in production in
Slovakia and certainly the biggest French investment in the country. 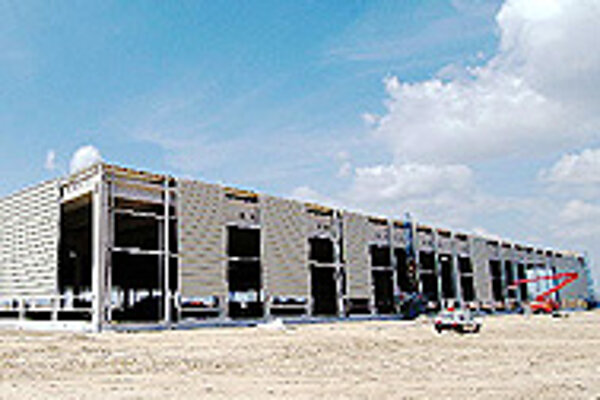 Font size:A-|A+  Comments disabled
THE FIRST car produced in PSA Peugeot Citroen’s new plant in Slovakia should leave the factory gate in January of 2006. So far, the construction works and recruitment process for the French carmaker are progressing on schedule. The first production hall should be finished in late summer this year.

The plant near the western Slovak town of Trnava will become one of the greatest investments in production in Slovakia and certainly the biggest French investment in the country.

PSA Peugeot Citroen decided to build its factory in Trnava in the beginning of 2003. Construction started in autumn of the same year. Total investments in the project should exceed €700 million. PSA will produce cars for all of Europe.

“Central and eastern Europe have a significant growth potential, especially in the category of small cars. We see the benefit of the Trnava plant especially in its close position to Italian and German markets. Thanks to a short transportation distance and a good infrastructure connection, we will be able to supply these markets very effectively,” said Alain Baldeyrou, general manager of the PSA Peugeot Citroen Trnava project.

The production programme of PSA Peugeot Citroen is founded on a so-called platform strategy, meaning that the whole range of Peugeot and Citroen car models are constructed on three types of chassis. The plant in Trnava will produce automobiles of both brands primarily based on platform number one - used for small vehicles.

It is likely that they will be the descendant models of Europe’s most sold car in 2003 - the Peugeot 206 and Citroen C3. In the factory’s first phase, PSA will produce sedans, later the production programme might also include wagons and cabriolets.

Thanks to the platform strategy, PSA will be able to change its production plan quickly. PSA officials say that it will not be a problem to increase production volume in the event of increased demand. The maximum production capacity of the Trnava plant will be 450,000 cars annually.

There will be four main production halls in the area of the plant.

The construction of a stamping hall with an area of 24,300 square metres began in December 2003. After its accomplishment, production technologies will be installed from August until December this year. The hall’s trial run will start in the autumn of 2004.

The welding and assembly halls have been under construction since February. Work on the painting hall began in the beginning of April. The three should be finished in the autumn of 2005.

Production tests will begin in March 2005 and the plant’s pre-production will last from January to July of 2006. The regular run will start in August 2006. In December 2007, the plant should reach its planned capacity of 300,000 cars a year.

Currently, worker recruitment is taking place at all levels - management, engineers (head staff), technical professions, and qualified labourers are all being sought. The plant is also seeking team leaders for its stamping hall, which should be the first to open. The number of employees should reach about 515 by the end of this year.

The majority of the recruitment process for management, engineers, and technicians should finish this year. In 2005 and 2006, the majority of the working staff should be accepted. The number of workers should reach its final figure by 2006 at more than 3,500, of which about 2,555 will be labourers.

Every worker will have to attend special training to learn PSA Peugeot Citroen know-how. The management and head technical workers will have to pass a two-month language course in Bratislava and an internship in France lasting from two months to a year, depending on their working position.

During the internship, they will study under the supervision of a tutor of the same working position. Other employees will go through domestic training in the plant or in a training centre.

PSA Peugeot Citroen plans to co-operate with high schools and universities beginning with the next school year. PSA would like to put automobile knowledge in the tuition plans of secondary technical and machinery schools in Trnava.

The company will also participate in training teachers, offer the services of French lecturers for needed professions, and support the schools with technical equipment. The carmaker would like to co-operate with the Slovak technical university in Bratislava.