PAUL and Kay Hanson arrived in Bratislava
in 1997, expecting to stay two years. Instead they will remain until Paul Hanson finishes his work at the end of
June.
Hanson began his ministerial career in Berlin 43 years ago, one mile west of the old Iron Curtain. He will finish
it one mile east of where the Iron Curtain used to be.
Hanson came to Europe in 1960, after a year of seminary studies 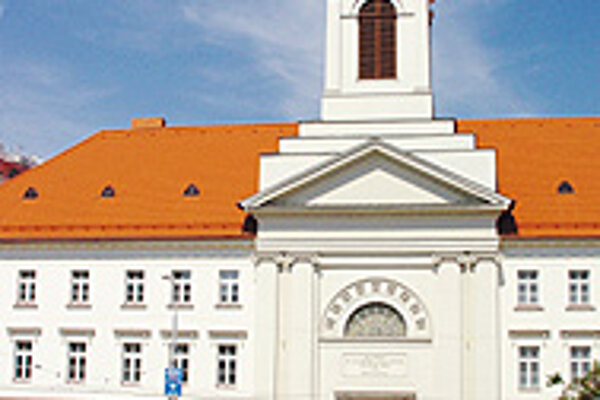 Font size:A-|A+0
PAUL and Kay Hanson arrived in Bratislava in 1997, expecting to stay two years. Instead they will remain until Paul Hanson finishes his work at the end of June.

Hanson began his ministerial career in Berlin 43 years ago, one mile west of the old Iron Curtain. He will finish it one mile east of where the Iron Curtain used to be.

Hanson came to Europe in 1960, after a year of seminary studies. He worked with refugees in Berlin for the Lutheran World Federation, then moved to Geneva, where he wrote capsule history summaries of Lutheran churches around the world, including the Slovak one.

Relaxing recently in a chair in his apartment on Palisády, Hanson said he remembered corresponding that year with a bishop of what was then the Czechoslovak Lutheran Church who resided at the same address where he and his wife now live.

The Hansons spent some time that year travelling around Europe and worshipping in international churches. They thought that sometime in the future they might like to serve such a church.

They put such dreams aside, however, while they raised their children and he served the Lutheran Church in the United States.

In 1996, while serving a congregation in Billings, Montana, Hanson received a phone call asking if he would like to serve the Bratislava congregation and teach religion in the Lutheran gymnasium. It didn’t take long for them to recognise that God had called them to serve here, Hanson says.

The Hansons were not unfamiliar with the church. Hanson’s sister and brother-in-law, who worked for the US Agency for International Development, had worshipped here when they were stationed in Bratislava.

His sense of humour, his punning ability, and his steadiness are legendary among the congregation’s members.

“This is a rare month,” he said on the first Sunday in February this year, as he greeted parishioners. “It has five Sundays.”

A few weeks later he warned at the beginning of the service that he was terribly disoriented, which he would explain in the sermon. (He and his wife had just moved to a smaller apartment, and he could not find some of his things).

One of his most moving sermons this year came the Sunday after he had returned from a visit to his daughter and her husband in Billings, Montana. Hanson’s first grandchild had died less than a day after a premature birth. Hanson struggled at times as he explained the importance of what he said was God’s comforting presence in times of hardship.

Hanson is a little disappointed that he has not learned Slovak as much as the Americans who teach in the Lutheran seminary.

“It was a choice between doing what I’m supposed to be doing, or learning Slovak,” he said. But he and his wife have no problems manoeuvring through the stores and markets of Bratislava, and taking in the cultural offerings in the city.

After retirement, the Hansons will move back to Billings. He wants to keep active and dreams of serving as an interim pastor at another international church.

“I never prayed for this job,” Hanson chuckles, “because I would never have known it existed.”

The church is one of 36 members of the Association of International Churches, which brings together English-language churches in cities around the world.

Although the congregation is a mission project of the Evangelical Lutheran Church of America, it is gradually becoming more financially self-sufficient. It has launched a venture fund, with a goal of raising $20,000 (€16,850) by June to become economically self-sufficient.

The Slovak Lutheran Church supports the congregation by offering the use of the Malý kostol facility.

At least two other English-language services are available in Bratislava.

The International Baptist Church of Bratislava meets every Sunday at 10:00 in room 206 at Iuventa, Karloveská 64, currently under the care of Pete Miller of Britain while it searches for a permanent minister.

Owen V Johnson, who is spending the year in Slovakia doing historical research, is an ordained elder in the Presbyterian Church USA.