ORGANISATIONAL difficulties and diplomatic faux pas distracted the public's attention from the political essence of the spring session of the NATO Parliamentary Assembly.
One month after Slovakia joined the alliance, the country's capital of Bratislava hosted the event from May 28 to June 1.
The assembly is an inter-parliamentary organisation of legislators from the alliance's member countries and associate members. Its plenary session meets twice a year. 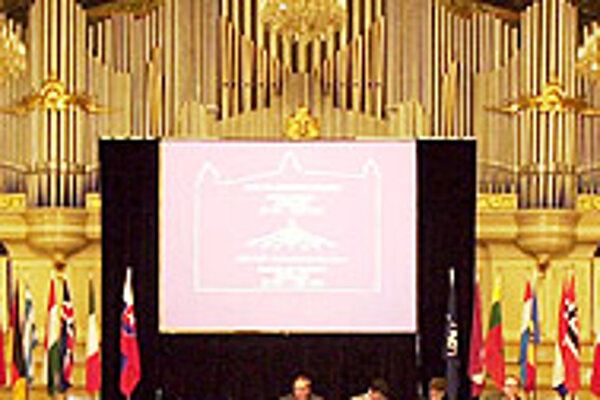 Font size:A-|A+0
ORGANISATIONAL difficulties and diplomatic faux pas distracted the public's attention from the political essence of the spring session of the NATO Parliamentary Assembly.

One month after Slovakia joined the alliance, the country's capital of Bratislava hosted the event from May 28 to June 1.

The assembly is an inter-parliamentary organisation of legislators from the alliance's member countries and associate members. Its plenary session meets twice a year.

Just one day ahead of the meeting, two plastic bags of explosives were found near the venue of the event, the building of the Slovak Philharmonic Orchestra. Police later found them only partially functional.

"I think that the fact that they [the explosives] were discovered is a good indication of the Slovak authorities' alertness," Simon Lunn, secretary general of the assembly, told Reuters.

There had been warnings of a 10,000-strong anti-NATO rally being planned for Bratislava. In the end, approximately 30 demonstrators turned up.

Despite this, Interior Ministry Spokesman Boris Ažaltovič rejected the claim that precautions were exaggerated.

Armed with water guns, helicopters, and heavy equipment, about 3,000 police prepared to act against protesters and terrorists.

Jozef Banáš, leader of the Slovak delegation to the assembly, told the SITA news wire that police precautions "could have been less flashy".

Leading up to the event, the Slovak Intelligence Service (SIS) had suggested that only several dozen protesters were expected.

Three safety zones in the centre of the town, public transportation detours, extensive road closures, and numerous checkpoints complicated the capital's everyday life for the duration of the session.

From the streets neighbouring the venue, only one vehicle was towed. Paradoxically, it was the mobile laboratory set up to monitor for biological attack, whose engine had failed.

On May 29, the session of NATO parliamentarians was interrupted by a sudden power outage in the interpretation booths. The next day a putrid reek in the building panicked participants. Later it was discovered that an improperly extinguished cigarette caused the smell.

The organisers unpleasantly surprised the Slovene delegation, as their national flag hung in front of the building was missing a stripe from its blazon and its six-pointed stars were improperly arranged.

NATO Secretary General Jaap de Hoop Scheffer, whose address was scheduled for the last day of the session, did not make it to Bratislava due to his plane's engine failure.

Only the Russian delegation caused a minor diplomatic scandal when one of its members, the outspoken and eccentric Vladimir Zhirinovsky, verbally attacked the Belarus delegation. Zhirinovsky is the leader of the ultranationalist Liberal Democratic Party and deputy speaker of the State Duma, the popularly elected lower house of Russia's legislature.

Vintsuk Viachorka, one of the leaders of the country's democratic opposition, told The Slovak Spectator that Zhirinovsky questioned the mere existence of Belarus and the legitimacy of Viachorka's presence at the session.

"I was personally invited by Mr Doug Bereuter, current president of the NATO assembly," the Belarusian politician said. He added that he was shocked by Zhirinovsky's behaviour.

"It did not occur to me that during an event of such scale the deputy speaker of the State Duma could label us Russians, and question our nation's existence. Thus he presented the official standpoint of the whole Russian delegation," Viachorka said.

Warning of the danger of failure in Afghanistan, Doug Bereuter announced at the plenary session that he would request all NATO heads of government to take urgent action to address shortfalls in the NATO mission in the country.

The assembly's Standing Committee authorised Bereuter to take this measure, because, he said, the upcoming weeks would be critical "for the future of Afghanistan and for the credibility of NATO."

"Unless the NATO allies quickly remedy the grave shortfalls in military personnel and equipment, the NATO mission in Afghanistan faces a real danger of failure," he told the plenary session.

The Standing Committee also urged that the current Ukrainian government to ensure that the upcoming presidential elections in the country are "fair, free, and transparent", and that the Ukrainian leaders facilitate "the widest possible participation of international observers".

Potter, who is the director of the Centre for Nonproliferation Studies at the California-based Monterey Institute of International Studies, warned legislators that those groups might have the detonation of nuclear explosives in Western cities as their goal.

In his presentation, Mohamed ElBaradai, Director General of the International Atomic Energy Agency said that the international community faces a global security crisis. According to ElBaradai, this is partially due to differing views of, and insufficient cooperation between, countries and international organisations such his agency, NATO, and the UN.

"We live in a globalised world, where we need a system of global security," ElBaradai warned. He also stated that Slovakia has made great progress modernising and improving security measures at its nuclear facilities.

László A Nagy, the Slovak Parliament's committee chairman for human rights, ethnic minorities, and women's issues brought up the topic of another security hazard; the Roma.

Addressing the NATO parliamentarians, Nagy said that unless a positive shift takes place in the living conditions of the Roma, the problems of this minority could turn into a serious security problem that could destabilise the country.