The future is in the cars

FOREIGN investors arriving in the Trnava region appreciate its very favourable geographical location, good infrastructure, industrial tradition, and qualified labour.
Trnava belongs to those most developed regions in Slovakia, and has a diversified business portfolio. More than half the companies in the region were established after 1990, and are considered be modern and dynamic. 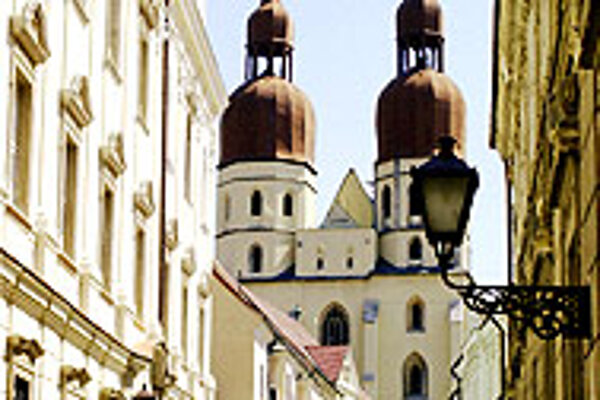 Trnava belongs to those most developed regions in Slovakia, and has a diversified business portfolio. More than half the companies in the region were established after 1990, and are considered be modern and dynamic.

Recently, the region has stuck in people's minds, mainly thanks to the investments of French carmaker PSA Peugeot Citroen, which wants to build a new plant there. Trnava is expected to become one of Slovakia's future automotive centres.

The Trnava region is in the western part of Slovakia. It shares borders with three countries - the Czech Republic, Hungary, and Austria. The west and northwest of the region are covered by the Záhorie Lowlands.

The fertile Danube lowlands are situated in the central part of the region. The Malé Karpaty range separates the Záhorie and Danube Lowlands. A part of the Považský Inovec mountain range emerges in northwest of the region and the Danube River forms the southern border with Hungary.

The region was much discussed recently because of the choice of the French carmaker PSA Peugeot Citroen to place a production plant near the city of Trnava.

PSA, the second biggest European carmaker, made its decision after judging several localities in different central and eastern European countries. According to PSA officials, the investment is not the movement of existing production capacities of the concern to the east, but the result of an expansion strategy in the region of central and eastern Europe, according to the Slovak Rating Agency.

The agency specified several factors that supported PSA's decision: the Trnava region is in the centre of Europe, and close to markets where the company wants to expand. PSA also values the locality for a plant of an area of 190 hectares, with easy access to railways, highways, and river transport. It also has the potential for the establishment of supplier parks. Additionally, the region has a strong industrial tradition with an educated labour force.

The overall PSA investment should reach ?700 million. The plant should employ 3,500 workers and produce 300,000 cars annually, and should start operations in 2006. Analysts expect it to provide jobs not only for people living in or near the city of Trnava, but also the surrounding area for 100 kilometres.

According to its volume of foreign direct investments, Trnava is third among all Slovak regions. The region welcomed Sk12.5 billion (?312.7 million) as of June 2003 out of the country's total FDI of Sk320.4 billion (?8 billion).

The current FDI in the region is mainly located in pharmaceutical, food, construction materials, electrotechnical, machinery, and wood industries. Apart from PSA, the Korean company Samsung also plans to expand in the region's town of Galanta.

While agriculture is developed in the south of the region, industry is typical for the north. Industrial production ranges from machinery to glassmaking, and has its centre in Trnava city.

The region is a significant source of energy production. The nuclear power plant at Jaslovské Bohunice and water power plants in Gabčíkovo and Madunice are major sources of energy in the region.

Other important industries of the region are the printing, metallurgy, chemical, and glassmaking industries. These industries are responsible for 90 percent of the region's exports. However, the region is generally not export-oriented. This situation is gradually changing, and the region is more and more focused on higher value-added products like machinery and electro-technical production.

Generation of GDP and the labour market

The average number of unoccupied jobs increases every year, reflecting the gradual growth of the economy. The highest salaries in the region are earned in finance and insurance.

According to Mário Blaščák, analyst with Ľudová banka, investors and their suppliers might create further pressure on salaries, as carmakers might compete with each other to attract future employees - PSA Peugeot Citroen in the Trnava region, and Hyundai/Kia in the Žilina region, wrote the Pravda daily.

The region has a well-developed road and railway transportation system. There is an international airport in Piešťany that is used mainly for charter flights.

The primary international airport is in the country's capital, Bratislava, in the neighbouring region, and accessible from any part of the region within an hour. Railway and highways connect Bratislava with the Czech Republic, Hungary, and the important centres of Slovakia - Žilina, Trenčín, Zvolen, and Košice.

Some investors cooperate with the management of Trnava's specialised schools to include their know-how in their tuition programmes. PSA Peugeot Citroen is a good example. The company will also participate in training teachers, offer the services of French lecturers for needed professions, and support the schools with technical equipment.

The city has many graduates of secondary schools and universities which form a good basis for the further development of the city and the region in the fields of industry, services, healthcare, food, education, etc.

The Trnava - Medziháj industrial park is planned for the western part of the city next to the state road connecting the cities Trnava - Modra - Pezinok - Bratislava. It has an area of 307 hectares. Ownership of the land is settled, and the only owner is the city of Trnava. So far, the park has no infrastructure, but connections to existing energy networks lie near its boundaries.

The Trnava commission for strategic planning, representatives of the city, entrepreneurs, universities, and consultants of the American-Czech company the Berman Group worked together to draft a detailed strategic plan for the city's economic development.

According to the plan, the city would like to support the development of small and medium enterprises and tourism. Conditions for investments should be improved thanks to closer cooperation with current investors.

Trnava representatives also want to support personal development and education, as well as include more working experience in schools. They also emphasised increasing the quality of life and extending opportunities for tourists and visitors.

The world-famous "spa city", Piešťany, is also located in the region, forming a centre for tourism opportunities.

The city has a balneology museum, dedicated to the science of baths and the therapeutic use of mineral waters, and many sport and relaxation facilities. There is a hospital, the Institute for Research of Rheumatic Diseases, and several non-state healthcare institutions.

In an external zone of the city, there are 125 hectares dedicated to a future industrial park. Land ownership of the area has not been settled. Connection to individual sources of energy is possible from the networks already existing near the park.

The most important investors in the region