"DE FACTO, there has been little baroque opera performed in Slovakia," said Martin Bendik, dramaturge with the Slovak National Theatre.
The causes are the staging specifications and demanding interpretation that this period, inclined to grandiosity and monumentality in all art genres, brought to opera. 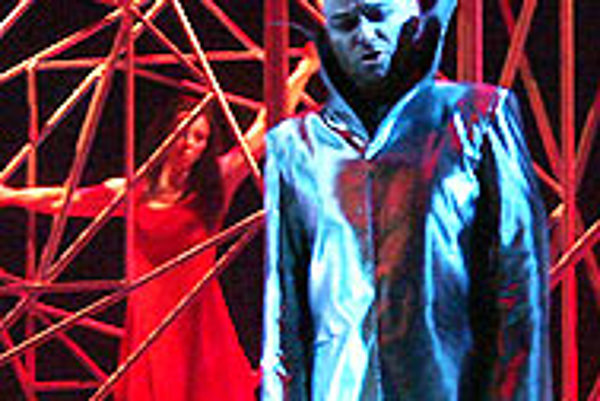 The causes are the staging specifications and demanding interpretation that this period, inclined to grandiosity and monumentality in all art genres, brought to opera.

The 20th century brought a renaissance of such operas, mainly the works by Georg Fridrich Händel, and especially one of his masterpieces, Alcina, to world stages. The movement has also provoked the team of the national theatre to include this particular work into its repertoire.

Alcina saw its Slovak premiere last week, on June 4. The story of passion and magic also opened the first nine-day International Festival of Music Theatre that hopes to present unknown and modern music theatre works to the Bratislava audience at the end of the theatre season every two years.

The opera, which premiered in London in 1735, was first re-released in Leipzig, Germany, in 1928. The audience in London saw the newer production in 1957, with Venice and Dallas following three years later. Currently, the opera is being performed on renowned world stages in Zurich, Berlin, London, and Paris.

"It is an opera of magic, bewitched love, jealously, and breaking the spell... a very typical baroque opera," said Bendik, who is behind the opera's dramaturgy.

The story uncoils around Alcina, the witch, who has the ability to enchant the men that come to her miraculous island. Ruggiero falls under the spell and forgets about his love, Bradamante. More people, lovers, add to the perplexity of the tale. A pure love is needed to remove the magic and bring them all back into reality.

The complicated world built on deceit and delusion, and the conflict between illusion and reality appealed to Zuzana Gilhuus, the opera's director and set and costume designer. She created a modern monumental set and neo-baroque clothes in simple colours. The artist worked to develop the basic timeless theme, as well as bring the story in parallel with present times.

Originally, Händel wrote 3 hours and 20 minutes of music on this issue of "eternal femininity that attracts, even when it is destructive". Today, no theatre performs the opera at such a length. The national theatre's chief conductor, Jaroslav Kyzlink, and his young team approached the shortened version with an ear for sparing the audience any torture.

The early music interpretation laid high demands on soloists and musicians. Both the theatre's orchestra and the choir were forced to invite new members to join them.

"The work on rehearsing the score was more intense than in other [mainly Romantic] productions," said Kyzlink, who formed a small chamber orchestra for the opera.