Lessons shared with the West

DRESSED in catchy pink and calling themselves hermaphrodite twins from the future, Eva and Adele work under the motto "wherever we are there is a museum".
The futuristic duo, which promotes no nationality but originally comes from Germany, visited the western Slovak town of Trnava last week. From Thursday to Saturday, visitors to the town could meet and talk to these bizarre live sculptures or take a picture. 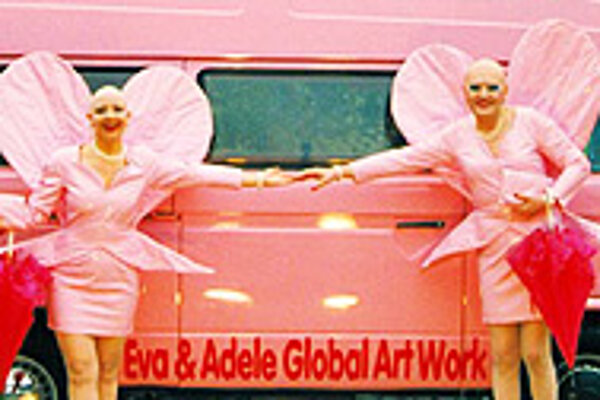 Font size:A-|A+  Comments disabled
DRESSED in catchy pink and calling themselves hermaphrodite twins from the future, Eva and Adele work under the motto "wherever we are there is a museum".

The futuristic duo, which promotes no nationality but originally comes from Germany, visited the western Slovak town of Trnava last week. From Thursday to Saturday, visitors to the town could meet and talk to these bizarre live sculptures or take a picture.

The twin globetrotters came to Slovakia in order to draw attention to the opening of the results of the three-year international project Re:Location Shake at the local Ján Koniarek Gallery. Though successful in setting the gallery to the direction followed by progressive European art centres, the project's idea shatters on the attitude of the public towards contemporary art.

"The surprise caused by the duo's presence should awake Trnava citizens from their lethargy, and inspire a greater interest in contemporary art," said Viera Jančeková, the curator and director of the gallery, which holds the exhibition Re:Location Shake of Trnava from June 4 to August 31.

"We have done several public projects on contemporary art before, but people just walked by, not stopping to look around. It was surprising for me to see this complete disinterest, as if they were withdrawn," she explained.

"This can be applied generally all over Slovakia, with the exception of Bratislava."

The Trnava part of the Re:Location Shake project - a culmination of three years of cooperation among cultural institutions from France, Austria, Luxembourg, Poland, Romania, Switzerland, and Slovakia, all of which will hold exhibitions and performances celebrating the event under different themes this summer - wants to draw attention to this situation. It brings together European artists who work with the "public taste and perception of art" to attract the public's eye to contemporary art and galleries.

One of the exhibitions of the project, Public Order, for example, shows the results of interviews performed by two students on the streets with Trnava citizens. They asked them about what art they like and what would they like to see in galleries. Based on the different opinions, several artists created the exhibited works, which range from traditional oil paintings to new, experimental art.

The gallery has also followed the world trend of attracting the public the practical way - by preparing an artistic coffee house. This space to discuss what has been seen and relax over a cup of coffee will be open on July 9, during The Shake Night, when all the project's cultural institutions scattered around Europe will connect virtually during a live two-hour television broadcast starting at 22:00.

The Koppel Manor, which houses the Ján Koniarek gallery, presents a project by the Azzoro Group from Poland, which screens films that humorously portray the relationship between art, artists, and the institutions that represent them. Christoph Büchel from Switzerland plays a recording of the American president talking about the works of art in his Oval Office at the White House. Simone Decker from Luxembourg unrolled 500 metres of a textile at the gallery, which, in the colours of sunset, should not only artistically provoke but also assist with relaxation.

The British-Austrian trio Volker Eichelmann & Jonathan Faiers & Roland Rust turned the sacral space of the nearby synagogue (The Centre of Contemporary Art under the supervision of the Ján Koniarek Gallery) into a cinema hall. Two large screens show scenes cut out of mainstream Hollywood movies set at galleries and museums that "support the mysterious images the public makes up about happenings in artist communities".

Institutions grouped under the Art Centres of Europe network started preparations for the Re:Location Shake project around 2000.

A year later, Trnava participated in a project with Luxembourg, exchanging artists who created their works abroad on the spot. In its history, the project has seen several such exchanges involving the seven participating institutions, each resulting in an exhibition.

"When we started in 2000, it was still a long way to the European Union. We feared that we would not be equal partners with Western institutions, which function on different principles," said Jančeková.

"After these three years, we see that we can work and communicate with these institutions despite our large financial problems. We balance these with increased effort. They teach us professionalism, and we can teach them a certain creativity; how to find other solutions when there's no money."

The Ján Koniarek Gallery sits at Zelený kríček 3. The Synagogue is located some 10 minutes away at Halenárska 2. The gallery is open Tuesday to Friday from 9:00 to 17:00 and Saturday to Sunday from 13:00 to 18:00. For more information on the project, visit www.re-location.org. For the gallery, go to www.gjk.sk.