Not a total disaster 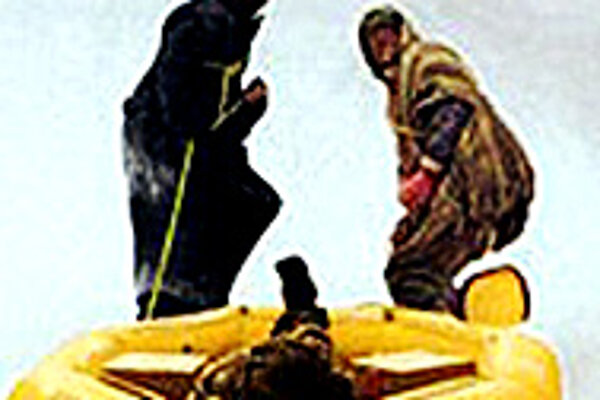 SOMETIMES you just have to surrender to bad movies. This is never truer than in summer, when multiplexes throughout the world are attacked by monsters, megalomaniacal madmen, explosives, and offensively bad dialogue. Whether right or not, Hollywood assumes that the extreme heat and tight, skimpy fashion will leave audiences so light-headed that they are incapable of thinking.

Occasionally, something truly great emerges amid the unabashed emptiness and clichés, such as last summer's effortlessly entertaining Pirates of the Caribbean.

So far, this summer has brought three blockbusters, none of which lives up to this same standard. Van Helsing and Troy have just as many problems as satisfying moments. The most recent, The Day After Tomorrow, is easily the best of the three. Of course, it's still pretty terrible.

But this is exactly what makes it enjoyable. It's so riddled with cliché and predictability that it's fun. It goes from absurdity to absurdity, constantly causing viewers to wonder, "My God, what else could they possibly throw in?" And then they throw it in.

The film has garnered substantial attention for its supposed politics. Many environmental activists take its main theme - in which global warming triggers a new ice age - as a fierce critique of the Western world's negligence, and in particular of the Bush administration, widely perceived as anti-environment and pro-business.

The movie certainly raises awareness of environmental issues. It also plays with the US political climate. If it has any bad guy, it's the stubborn US vice president, who strongly resembles his actual counterpart, the increasingly unpopular Dick Cheney.

In the film, the vice president vehemently rejects advice whenever it conflicts with his own agenda. Sound familiar? It's meant to. But this is a summer blockbuster, so there's not much room for social critique. The film's politics are more a wink and a nod to its audience than an outright attack on the right wing.

As with any big summer movie, spectacle is the priority. Computer-generated images come just as quickly as the oncoming ice age, which happens in a matter of days. Tornados rip apart Los Angeles, massive waves smash into New York, and frozen helicopters crash into the mountains of Scotland. It's all very impressive to look at, but what is really pleasurable is how relentless and ridiculous it all is.

Just when you think it can't get any worse, it does. Having trouble surviving because it's so cold out that your blood will freeze? Well, here's a hungry pack of wolves to hunt you down.

The natural disaster setting, of course, leads to great personal revelations. People admit that their lives have been a waste. Estranged lovers renew their vows. Young people acknowledge their passion for one another, and have intense, slow-motion kisses. A rich boy bonds with a homeless man. Arrogant Westerners beg their "Third World" neighbours for assistance.

It's all so perfectly over-the-top you just have to enjoy it. That the two main heroes, Dennis Quaid and Jake Gyllenhaal, are clearly not enjoying themselves only adds to the fun. Is it stupid? Absolutely. But, how can you bother thinking when each summer just gets hotter and hotter?