AFTER a tough period between 1996 and 2001 when the jobless rate climbed from 13 to almost 20 percent, the country's labour market expects much rosier times.
Since 2002, the rising tendency of the unemployment rate has turned, and has been gradually declining, the Slovak Rating agency and Amrop Jenewein Group said in their Business Environment Report for 2003. 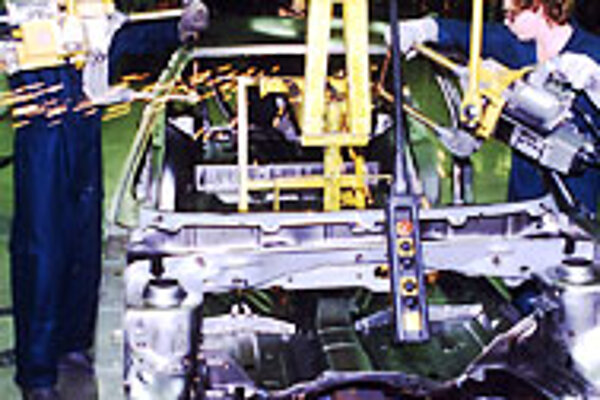 Font size:A-|A+0
AFTER a tough period between 1996 and 2001 when the jobless rate climbed from 13 to almost 20 percent, the country's labour market expects much rosier times.

Since 2002, the rising tendency of the unemployment rate has turned, and has been gradually declining, the Slovak Rating agency and Amrop Jenewein Group said in their Business Environment Report for 2003.

According to the National Labour, Social Affairs, and Family Office, the downward trend in the jobless rate continued through April 2004, when the registered unemployment rate amounted to 15.25 percent, the lowest April figure since 1998.

Labour market prognoses indicate that the registered unemployment rate could drop slightly below 15 percent in May.

The proportion of active labour market participants seeking possibilities and competitiveness has been rising.

Completed university education, and active knowledge of English or other foreign languages, and computer literacy and internet skills have become the informal standard of work force quality, said the report.

Work force mobility remains among the mţost important factors for long-term business development, and human resources experts agree that Slovakia continues having problems with this factor.

Even the country's Finance Minister, Ivan Mikloš confirmed this trend during the last conference of The Economist in Bratislava on June 3.

"It is true that the mobility of the Slovak labour force is low. That was one of the main arguments I was using during negotiations with European Union countries on opening their labour markets. It is exactly the reason why there is no danger of invasion of EU labour markets by Slovaks," said Mikloš.

According to the Finance Minister, housing and tradition are two reasons that keep the labour mobility low in Slovakia.

"The situation calls for systematic solutions. It would be good to create a market for rental houses, which currently does not exist in Slovakia. However, at this point we do not have investors who would consider investing in such a market advantageous," Mikloš added.

However, big investors do need a mobile labour force. Representatives of carmaker PSA Peugeot Citroen at The Economist conference said their Trnava site offers jobs not only for locals but also for people from other regions.

"Apart from a single fixed financial benefit from the public budget it is necessary to focus employment promotion policy on real estate market development. A synergic effect would be ensured by combined financing (public budget, employer contributions, mortgage credit), simple construction, common infrastructure, and low land price in an acceptable distance for commuting to work," the report reads.

According to the daily Pravda, over the past six months only 15 unemployed people accepted the states offer of relocating for work and monthly state assistance of Sk10,000 (€250). An additional four people of the 430,000 unemployed have requested state assistance with no results.

The state assistance is part of the Labour Ministry's package to inspire the unemployed to take up jobs.

Sociologist Monika Čambaliková does not consider the sum a strong enough motivation for people to relocate. She explained that in places where there are available jobs, housing prices are far too high and unaffordable for the majority of citizens.

Labour Ministry spokesman Martin Danko said that the state assistance was not designed to solve the problem of labour mobility, but only to support those who decide to relocate.