Sixteen-year-old in a bomber

WOULD you believe that the firm of an 80-year-old man who flew in the first wave of the allies' invasion of Normandy 60 years ago has a branch in Bratislava? Bratislava-born Ivan Schwarz, who grew up in Bytča, was sent to Wales by his father before the World War II broke out. His mission was to learn the language, get an education, and learn how to milk sheep from the Welsh shepherds. However, the war broke out, and the 16-year-old took to the sky to fight Hitler's Germany.
In the British Isles, as in most countries, sheep were not kept for milk but only for wool and meat. 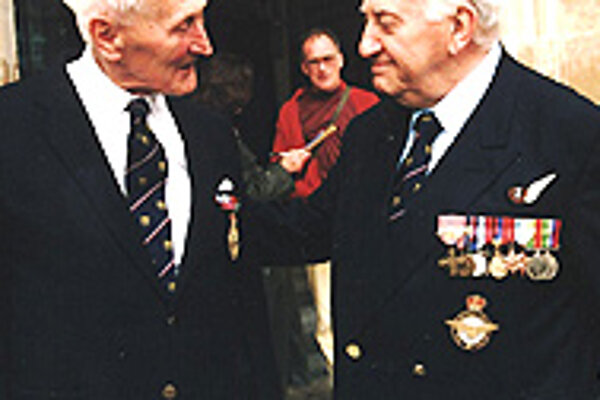 WOULD you believe that the firm of an 80-year-old man who flew in the first wave of the allies' invasion of Normandy 60 years ago has a branch in Bratislava? Bratislava-born Ivan Schwarz, who grew up in Bytča, was sent to Wales by his father before the World War II broke out. His mission was to learn the language, get an education, and learn how to milk sheep from the Welsh shepherds. However, the war broke out, and the 16-year-old took to the sky to fight Hitler's Germany.

In the British Isles, as in most countries, sheep were not kept for milk but only for wool and meat. However, Ivan's father had agreed to rent fields from Lord Newborough and wanted to start breeding sheep Slovak-style. He was no dreamer - he was already a rich landowner and lawyer.

Before his father sent him to Wales, young Ivan studied in Bytča, Spišská Nová Ves and Žilina.

"At the beginning of the war when my father could no longer send money to Britain to cover my private studies, I first switched to public school and later I decided to fight," General Schwartz said after mentioning his love for sport. As a child he often rafted the Váh River from Vrútky to Pieštány in his favourite kayak. His good physical condition lets him work 12 hours a day, even at 80.

At the beginning of the war, thanks only to his muscles, he was able to persuade the recruiters that he was over 18. As a deck gunman he flew over Nazi Germany. His dream was fulfilled and he fought against those he loathed. He flew over 200 hours in a commando bomber. His officers noticed that he excelled as a navigator and redirected him to the coastal command of air defence. His flight records show a total of 1,200 hours in the air. He also escorted naval transports.

"I assume that I have flown a total of 4,500 hours," he said, shrugging his shoulders as though it was only a half-forgotten memory for him.

What about fear? How strong was it, when hundreds of soldiers were dying around him?

"It was important not to get cold feet," he said, "and start believing in the devastating forecast that it would be you who would be hit. It was a game of nerves - the feelings of hot and cold, the loss of optimism and self-confidence. In that state you were actually halfway to the grave.

"I can recall my good friend Źarnovický who got into the machine with cold feet and never returned. Just like Theodor Schwarz, who escaped to the Sudetes from the fascists," the general remembered.

After the war, in 1945, Schwarz naturally returned to his home, Czechoslovakia.

"Among other reasons, [I returned] because my family was in a horrible condition and I wanted to help them. My father and mother were imprisoned during the war. During the National Uprising they hid in the mountains, which had an impact on them. My father died two years after the war," he recalled.

At 20 he was in charge of securing the air connection with foreign countries from Prague's Ruzyň airport. Later, he was moved to the first aviation district's headquarters in Dejvice where he commanded all the aviation schools, airports, and air warehouses the Germans had left behind.

As a first lieutenant he more or less filled the role of a major-general.

"I wanted to install a new transparent system, like the one that we had in England. However, that disturbed those who wanted to fish in murky waters," he said.

He also felt the communist spirit penetrate the army. He was openly told that, as a pilot from the West, he could not be trusted. At the same time, he saw how Czechoslovakia was falling away from London and coming closer to Moscow. Greatly disappointed, he returned to the British Isles in 1946.

"Politics did not interest me. I have always lived for work and that was enough for me. The motto of my life was that, "if I cannot help, I would not harm anyone". This is why I left for a country where I felt I could be useful," Schwarz said.

He truly found himself in Great Britain, though at the beginning he learned what it meant to live on vegetable soup and bread. He immediately started studying. Seeing Europe in ruins made him focus on the construction business and railways. However, he was not able to finish his studies, as business swallowed all of his energy. He became the sole European representative for the machine supply company Excavators. Later he worked for Edwards Rockwell selling armatures necessary for the construction of nuclear power plants.

This was only a fragment of his activities. His business company made a turnover in the millions in the late 1950s. There were times when he employed dozens of engineers. He assisted in the massive modernisation of British railways. Today his London-based company has a Slovak branch and does business with Bulgaria, Romania, and other countries. He returns to Slovakia at least three times a year.

When he talks about his motherland, he predicts a great future. He was truly pleased that Slovakia's Defence Minister Juraj Liška unveiled a monument for the participants in the western resistance: "We had been waiting for that since the end of the war, and finally we have it."