THE ART world is full of famous creative couples: Georgia O'Keefe and Alfred Steiglitz; George Sand and Frederic Chopin; Frida Kahlo and Diego Rivera; Simone de Beauvoir and Jean-Paul Sarte. The idea of equally creative minds driving one another forward, serving as one another's muse, and inspiring great thoughts is romantic. But how does this work on a day-to-day basis? Who vacuums? Who picks the children up from school? 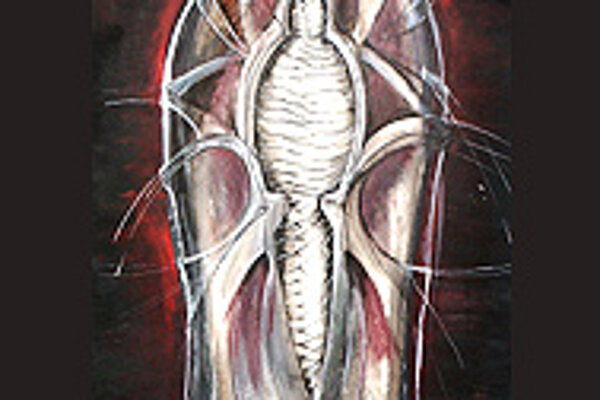 Font size:A-|A+0
THE ART world is full of famous creative couples: Georgia O'Keefe and Alfred Steiglitz; George Sand and Frederic Chopin; Frida Kahlo and Diego Rivera; Simone de Beauvoir and Jean-Paul Sarte. The idea of equally creative minds driving one another forward, serving as one another's muse, and inspiring great thoughts is romantic. But how does this work on a day-to-day basis? Who vacuums? Who picks the children up from school?

Local husband-and-wife artists Ivan Patúc and Karin Lunterová-Patúcová somehow manage to take care of the housekeeping details and still produce interesting and new works of art. Their latest joint show opens this week, but showing together is nothing new.

"We've known each other for 12 years," Karin explained. "And we have just always shown our works together. Not that they are really in any way similar. I'm not even sure they complement each other," she said, laughing.

They both work with mixed media: Ivan creates large, three-dimensional work with strong architectural influences. His ideas are original and his vision unique; yet his inspiration - myths and classical images - are obvious. Karin's works explore femininity and, since the birth of their two sons, fertility and maternity.

Ivan's latest pieces are sculptures. A reserved man, less comfortable with words than with images and ideas, he struggles to explain his art: "Egypt, mummies, and reincarnation," he said. "But not death in a final sort of way, but as change. Like the way a caterpillar metamorphoses into something completely different."

The sculptures are life-size wooden figures, some human, some animals, bound not with linen, but copper and aluminium.

A house, and yard, full of art

The art is interesting, but Ivan and Karin's life together is perhaps more so. The son of a roofer, he was influenced by the architecture and construction methods around him. Many of his earlier works are large. One, now in their backyard, could be the flame from the torch held by the Statue of Liberty; it even lights up.

Karin came from an artistic family; her mother is the ceramist Bernardína Lunterová. "I never thought about being anything else," she recalled. "As a child, I shared my bedroom with the clay."

Her pottery, functional and decorative, lines the shelves in their home. Her coffee cups are her own, of course.

Ivan's family was supportive of his talents, but concerned that their son needed a marketable trade. He gave it a shot. A good student, he completed a vocational programme in auto mechanics after high school, much to the horror of his high school teachers. Now, in Ivan's hometown, his family and neighbours refer to him as "Picasso", a nickname he has grudgingly accepted. "I never cared much for Picasso," he explained. "I prefer Dali."

But back to practical matters such as electricity bills and groceries - how do two artists make ends meet? Like the renaissance artists who influenced him, both Ivan and his wife have restored and created art for churches. They teach art classes at their older son's school. Ivan paints the signs advertising movies for a Bratislava cinema. He has created displays for the openings at the larger multiplexes. Together, he and Karin have designed children's murals. He has built playhouses and other playground equipment. Giving an award? Ivan has designed many. How about a weather vane?

"That was my idea," said Karin, pointing to the witch on top of their house, "But he made it. It's a good landmark for people trying to find our house."

Where do artists get their ideas? "Ivan is always drawing," Karin explained. "He can't sit still. Even if he's watching TV, his hand is going, and things just come out."

She does not work the same way: "I'm lucky if I create one new piece a year. And now with two small children... let's just say I'm savouring motherhood right now. I have a lot of ideas I'm filing away for the time being."

That doesn't stop her from being a formidable critic. "I would not call our home a mutually nurturing, peaceful environment," she said, making her husband laugh. "No, for her, everything is life and death," he said.

"True," she concurred, "We always point out what bothers us. It's difficult when someone close criticises your work, and, at first, it killed my enthusiasm. Now it's a plus. It pushes me forward."

Who is the tougher critic? "I am," said Karin. "He's much more diplomatic. Or maybe he just talks less than I do."

The show by Ivan Patúc and Karin Lunterová-Patúcova opens at 17:00 on June 17 at the Inglas Art Gallery, Štefánikova 31, Bratislava. It will run for four weeks.