SLOVAKIA has a new president, the third since the fall of communism and the rise of an independent Slovakia. Ivan Gašparovič was sworn into the post on June 15 with hundreds of guests attending the ceremony.
In his inauguration address, Gašparovič, 63, a lawyer by profession and an active politician since the early 1990s, said that he wanted to be the "president of all citizens", and that he had entered the presidential race as a civic candidate, a statement that was challenged by observers. 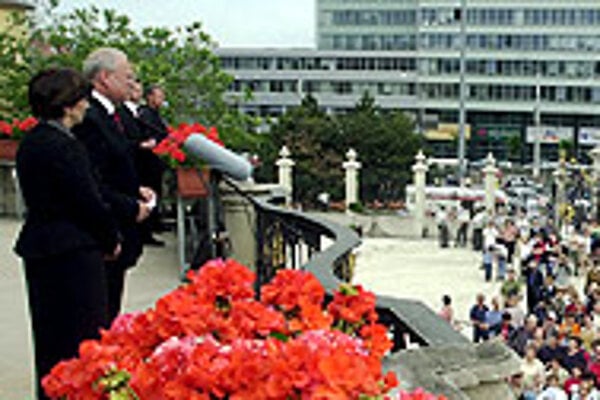 Font size:A-|A+0
SLOVAKIA has a new president, the third since the fall of communism and the rise of an independent Slovakia. Ivan Gašparovič was sworn into the post on June 15 with hundreds of guests attending the ceremony.

In his inauguration address, Gašparovič, 63, a lawyer by profession and an active politician since the early 1990s, said that he wanted to be the "president of all citizens", and that he had entered the presidential race as a civic candidate, a statement that was challenged by observers.

Gašparovič is a former member of the once-ruling Movement for a Democratic Slovakia (HZDS), the party that stood behind the creation of an independent Slovak Republic in 1993. After leaving that party in 2002, he started his own party, the Movement for Democracy (HZD). When he entered the presidential contest, the Confederation of National Forces of Slovakia and the opposition party Smer officially backed his candidacy.

"It is clear that he will not be a non-partisan president, but it can be expected that he will be able to resist possible pressure from Smer, for example, because he is a skilled diplomat and an experienced politician. That is, of course, provided some issues are not part of his own programme," Miroslav Kusý, a political analyst with the Comenius University, told The Slovak Spectator on June 16.

Gašparovič, who defines himself as a centre-left politician, has also mentioned the social aspect of reforms and told the media at his first presidential press conference that he wanted to discuss softening the reforms of the current right-wing cabinet.

"Reforms are necessary because without them we would not have gotten into the EU. So I say yes to reforms, but the position of the citizens also needs to be considered because arriving in the EU with poor citizens does not show us in a good light either," Gašparovič said.

The Slovak cabinet, led by PM Mikuláš Dzurinda, has undertaken extensive reforms in many areas including social affairs, taxes, education, and healthcare. The two latter are still uncompleted.

According to Kusý, the "reforms will certainly turn into an area of conflict provided that Gašparovič continues in the direction that he has outlined so far."

Kusý noted, however, that the presidential rights to interfere in the legislative process are limited to the right to veto laws.

"The president does not have many rights to interfere in this sphere. I do not expect that Gašparovič will have an aggressive [anti-government] attitude. Compared to the previous president, Rudolf Schuster, Gašparovič is more balanced psychologically and it can be expected that he will try to take the path of agreement rather than conflicts," Kusý said.

The first Slovak president, Michal Kováč, said that Gašparovič had a chance to become a good president thanks to his extensive experience in politics and top state posts. In the 1990s Gašparovič served as the speaker of parliament.

Gašparovič said that in his decision-making he would rely on the opinions of a team of advisors and experts, the names of whom he refused to reveal.

Touching on the field of foreign policy, Gašparovič said that Slovakia's recent admission to the EU and NATO was a confirmation of the state's preparedness to be a reliable partner.

Also attending the ceremony, the top representatives of the Slovak Catholic and Evangelical Churches said they hoped the new president would try his best to help improve the lives of the inhabitants of this central European country.

"We hope and pray that our new president will serve our further internal integration, and that he carries out the service of pointing to the good spiritual base that Christianity laid in our nation," said Július Filo, the general bishop of the Evangelical Church in Slovakia.

Echoing the Christian tune, Gašparovič noted in his address that if people "adhered to the Ten Commandments, the world would be considerably better and nicer".

Representing the Catholic Church, archbishop Ján Sokol said that the president should help all the people in Slovakia "so that they have a living, so that the abyss between the rich and the poor gets smaller, and so that social problems are solved - especially in education and healthcare".

Reiterating the social aspect of life in Slovakia today, Gašparovič also said that when communism collapsed in November 1989, "citizens felt as if they could breathe in and take off [flying]", but that today only two out of 10 people are happy with their lives.