SIX Hungarians writers and one artist received the Posonium Literary and Fine Arts Awards 2004 on June 16 for their contributions to the literature, art, and cultural heritage of the Hungarian minority living alongside the southern border of Slovakia.
"The prize is a landmark on my long journey," said László Koncsol, the winner of the Grand Prize, who soon will turn 70. 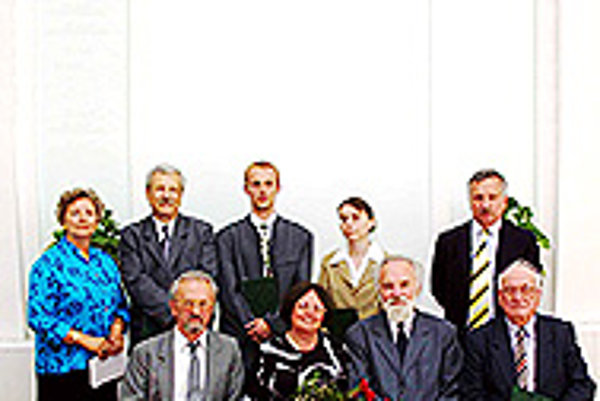 Font size:A-|A+  Comments disabled
SIX Hungarians writers and one artist received the Posonium Literary and Fine Arts Awards 2004 on June 16 for their contributions to the literature, art, and cultural heritage of the Hungarian minority living alongside the southern border of Slovakia.

"The prize is a landmark on my long journey," said László Koncsol, the winner of the Grand Prize, who soon will turn 70.

The awards, the largest annual financial prizes given in Slovakia to Hungarian artists who are often overlooked, bestow a wider recognition closely following the recent European Union enlargement by 10 new countries, including Slovakia and Hungary.

"The purpose [of the literary awards] is to finally give recognition, encouragement and financial reward to those writers who have struggled with extremely difficult political and financial circumstances in the past," said Edith Lauer from the Hungarian American Coalition, a nationwide non-profit organisation that promotes public understanding and awareness of Hungarian-American issues.

She and her husband, John, started the Posonium Literary Award project in 2000. A year later the Madách Association in Slovakia founded the Fine Arts Award, sponsored by György Mátyásfalvi, a Budapest businessman, to also compliment the life-long works of Hungarian-Slovak artists.

Over 130 Hungarian books were submitted this year; a quarter of which received serious consideration by the four-member selection committee comprised of highly respected Hungarian writers. The participants are ethnic Hungarians who have written in Hungarian all their lives and have lived in Slovakia.

"The award gives them self-confidence," said László Dobos, a writer who received the Lifetime Achievement Award last year. "Thanks to our American friends, the Lauer family, it is a power that enforces new themes, new aspects of literature," Dobos said. His book, The Dispossessed, about the expulsion of Hungarians from the border territory to the nearby countries between the years 1945 and 1948, has been translated into English and awaits publication.

According to Gyula Duba, prominent writer and chairman of the awards' selection committee, the prizes represent the first attempt since 1920 to recognise Hungarian writers.

"Before that year, the rich Hungarian literary and cultural tradition of present day Slovakia provided a normal environment in which culture could flourish," explained Lauer, who also works as Executive Secretary of the National Association of Hungarians in Slovakia.

"But after the Treaty of Trianon [which divided the two countries after World War I], Hungarians became a barely tolerated minority in their original homeland, and their native-language cultural endeavours were neither appreciated nor encouraged."

She explained that the Hungarian community of Slovakia, now numbering 526,000, is very active culturally. Around 100 books get published every year, and last year the number reached 140. In addition to the literary output, there are quite a few Hungarian publishers, newspapers and magazines, theatres, dance groups, annual festivals, and a Hungarian Cultural Centre financed from Hungary.

"Just like the writers, many of these cultural institutions have fought long and hard to get proportionate and dependable levels of financial support from the Slovak state that would enable them to offer a wide range of programs. Instead of sporadic and small, insufficient grants, they have urged the government to provide annually the level of cultural funding that would enable them to maintain their institutions and provide cultural programs for Hungarian-speaking citizens of Slovakia," she said.

Apart from being recognised by "their own", the Hungarian cultural achievements are barely recognised outside the community, among the majority of Slovaks.

"Only in a few cases have works been published into the Slovak language, although I feel it would be very useful for translations to appear, so Slovaks could understand both the cultural value and the special perspective Hungarians have developed living as a minority," Lauer said.

With both Slovakia and Hungary joining the EU, the situation might change. The opportunities for minorities are hoped to increase, as will the coexistence and cultural communication among these communities improve.

"By being in the EU we have gained a hope that our inner, historical issues of co-existence and communication will not only be presented in better light but, also solved in a positive way," said Dobos.

"In my opinion, our long-term mutual coexistence has had more positive features than we have ever talked about. Politics have tended to pursue and highlight rather complex issues and conflicts, about which, I hope, we will now talk more openly, and [meanwhile] focus on issues of human coexistence. Not only because we need it, but also because the new situation requires that from us," he said.

Dobos added: "With EU entry, the era of subjection [to the will of the majority] ends. The increasing equality of rights for all citizens and the resulting self-confidence of citizens will erase the differences between minority and majority."

sThe Hungarian writers and Lauer agree that with more opportunities opening in the field of culture, the quality of literature will become better, stimulating an interest [in the Slovak - Hungarian minority; its history, life, and work] not only among the Slovak majority but also worldwide.

EDITH Lauer is a leader of the 1.5 million-strong Hungarian American community, a life-long supporter of Hungarian education, and a tireless advocate for the human rights of the 2.5 million Hungarians who live in historic national communities in countries bordering Hungary. Born in Budapest, Hungary, Lauer witnessed the 1956 Hungarian Revolution against Soviet oppression. After the revolution's defeat by Soviet forces, her family first escaped to Austria, and then settled in Maryland in 1957. There she met John Lauer, and after marrying him in 1963, they moved to South Texas. After the fall of communism in Hungary in 1990, she was one of the founders of the Hungarian American Coalition. For nine years she served as the Coalition's president, then as its chairman. She retired in 2002, when she was elected chair emerita. She has promoted human rights for the large historic Hungarian communities that live in Romania, Slovakia, Serbia, and Carpatho-Ukraine. She was able to bring Hungarian community leaders together with US representatives, and thus provided first-hand information to Washington policy makers on the rightful aspirations of the Hungarian communities. The current Executive Secretary of the National Association of Hungarians in Slovakia, Lauer is the recipient of several awards for her work.

Posonium Literary Awards 2004
Grand Prize
László Koncsol for The Towns and Villages on Žitný ostrov, an educational book on the history of people living at the south of Slovakia
Lifetime Achivement Awards
Zoltán Fónod,literary critic
József Mács, prose writer
Debut Writer's Award
Gábor Leck - for One Day in the Life of a Plumber, a collection of poems
Special Awards
István B Kovács - for Gemerology, an ethno-cultural study from the region of Gemer
Anikó Polgár- for the study Catullus Noster