Cirostratus, Opera v Boeingu
Music by Slavo Solovic
Libretto by Viliam Klimáček
Published by: Agentura Pohoda
Available at: Agentura Pohoda (www.pohodafestival.sk), later also in music stores
THE INTERNATIONAL advantage of opera is that one does not need to understand the words to appreciate it. This is doubly the case for Cirrostratus, Opera on a Boeing, as it is translated, as it is musically that it is most innovative. 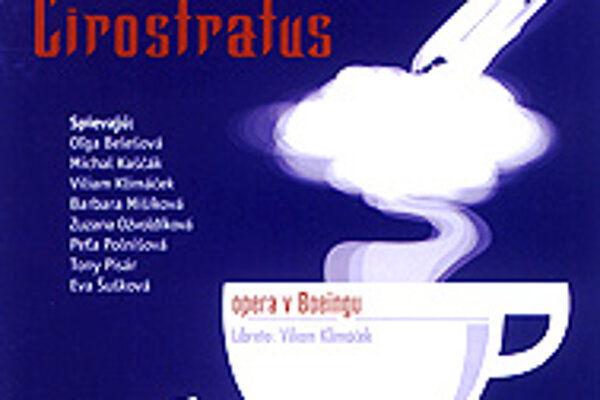 THE INTERNATIONAL advantage of opera is that one does not need to understand the words to appreciate it. This is doubly the case for Cirrostratus, Opera on a Boeing, as it is translated, as it is musically that it is most innovative.

Slavo Solovic, the man behind the music, studied violin in the Žilina conservatory, and once played for the symphony, opera, and ballet of the Slovak National Theatre. He also has one foot in the alternative scene, playing with the Slovak band Neuropa, and working with Slnko Records, on which he released Discopigs - Music from Theatre Plays, an album of flavourful breakbeats and jungle.

For this production, Solovic took equal measures of both interests. The music ranges from untouched orchestration, often heavy on the tuba and expressive strings, to fully electronic percussion and tones. To varying extents the instrumental elements are spliced and pasted in repeated refrains. At times these snippets are so short that they sound like a skipping or fast-forwarded CD, producing a surprising and remarkably harmonious effect.

The opera's plot follows a flight of unhappy souls that faces engine troubles. Their Boeing hits turbulence, allowing for a vomiting scene - perhaps the first in opera history, the liner notes celebrate. Other early nonsense, from which non-Slovak speakers are happily spared, pass with the sickness as the plot moves from Airplane! to something more quasi-metaphysical. The plane is sucked in a downward spiral into a cirrostratus cloud where it comes to rest, saved from destruction. A redeeming force then speaks through a dead dog, telling the passengers to start their lives anew.

The singing is at its best when at its most operatic, especially in the voices of soprano Eva Šušková as the actress, tenor Michal Kaščák as the blind soldier, and bass Viliam Klimáček as the airplane's unlucky captain. When the singing moves towards the format of a musical, as it tends to do with the other characters, the voices are less interesting.

Overall, however, the music avoids the clichés of dramatic composition, exciting the desire to see it set to theatrical production. One can imagine something better, however, than the world's first operatic vomit scene.