Harry Potter and the Prisoner of Azkaban
Starring: Daniel Radcliffe, Rupert Grint, Emma Watson, Gary Oldman, David Thewlis
Directed by: Alfonso Cuaron
Running time: 142 min
Rating: 6.5 out of 10
HARRY Potter has broken all the rules of age demographics. Though JK Rowling's books about an adolescent wizard were initially geared towards tweens and teens, adults have greeted them with an equally feverish intensity, and lots of cash. 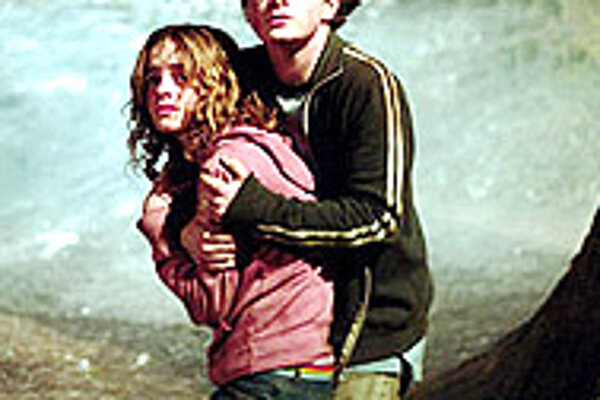 HARRY Potter has broken all the rules of age demographics. Though JK Rowling's books about an adolescent wizard were initially geared towards tweens and teens, adults have greeted them with an equally feverish intensity, and lots of cash. That they would become a movie franchise was a foregone conclusion.

The series' followers have proven an especially fanatical bunch, which both helps and hurts the movies. On the one hand, their devotion guarantees good box office numbers and plenty of free word-of-mouth advertising. But it also ensures that there will be endless complaints about changes, omissions, and misinterpretations. Cries of "It's not as good as the book" and "How could they?" are commonplace. Even the most cursory glance at a Harry Potter fansite will reveal numerous calls for the heads of the filmmakers.

Though perfectly understandable, these responses ignore an important fact: Film and literature are very different media. They tell stories in drastically different ways. Furthermore, it is impossible to compress a relatively lengthy novel (and Rowling's books tend to be long) into a film for a mainstream audience while keeping every detail intact.

The job of a screenwriter adapting a book is a difficult one. You must faithfully depict its world for the devotees, while simultaneously making it accessible to the uninitiated. It becomes even more complicated when dealing with sequels, as you must prevent those who have not read the books or seen the previous film or films from being completely lost. In these respects, The Prisoner of Azkaban, the third in the Harry Potter series, partially succeeds.

As a stand-alone film, it is entertaining, engrossing, and comprehensible. Unfortunately, it's also extremely scatterbrained. It has a number of sequences that seem to serve no purpose other than to show off special effects or provide comic relief. But comic digressions are unnecessary: There is plenty of wit ingrained in the linear story and a number of talented performers to milk it.

Some Potter aficionados claim that a familiarity with the books is necessary for appreciating these seemingly pointless scenes. But what about the pagan heathens out there? Is this film not made for us too? Fortunately, there is much that anyone can appreciate.

The director, Alfonso Cuaron, is an inspired, if unconventional, choice. His most famous film, Y tu mama tambien, gained most of its press for being "sexually explicit"; but, at heart, it's a coming-of-age movie that deals with the awkwardness of growing up. He also directed one of the finest children's films of the past 10 years, A Little Princess. He and cinematographer Michael Seresin give Azkaban a level of sophistication and feeling that the director of the previous two, Chris Columbus, was incapable of.

This is crucial, as Harry Potter is about adolescence just as much as wizardry. Its three main teenage stars - Daniel Radcliffe (Harry), Emma Watson (Hermione), and Rupert Grint (Ron) - each seem to be developing skill and poise along with young adult bodies. Watson again proves the most engaging, holding her own among some of England's finest actors with her wit, charm, and maturity. Hopefully, in the next film, the screenwriter can catch up with her.