THE JUNE 18 approval of the EU constitution opened room for criticism by one of the ruling parties, the Christian Democratic Movement (KDH), whose deputy chairman, Vladimír Palko, stated that Slovakia was "losing its sovereignty" to the document.
In his initial reaction to the approval of the constitution, Palko, who is also the country's interior minister, suggested that his party would be looking for ways to organise a referendum on the document. 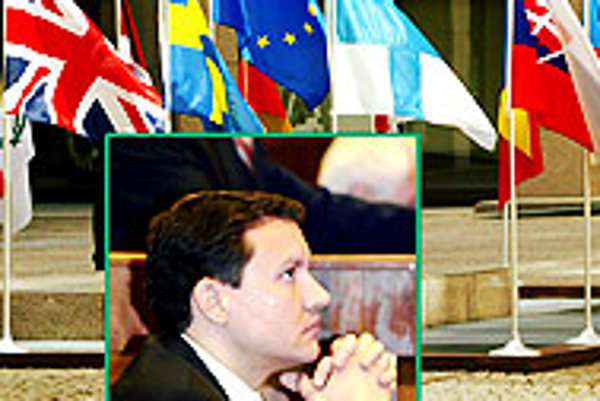 Font size:A-|A+0
THE JUNE 18 approval of the EU constitution opened room for criticism by one of the ruling parties, the Christian Democratic Movement (KDH), whose deputy chairman, Vladimír Palko, stated that Slovakia was "losing its sovereignty" to the document.

In his initial reaction to the approval of the constitution, Palko, who is also the country's interior minister, suggested that his party would be looking for ways to organise a referendum on the document.

Pavol Minárik, the head of the KDH parliamentary caucus, joined the criticism, saying that the constitution was "not a good document".

"The EU constitutional treaty provides the foundation for movement towards a super-state," Minárik said.

Figeľ himself said that the new constitution was a "positive compromise", adding that he was happy that the member states were able to agree on the document.

Unlike the KDH officials, Slovak Prime Minister Mikuláš Dzurinda welcomed the constitution, and said that he considered the approval of the document "another historical milestone on the path of European unification in political and practical terms."

"If we apply this document precisely, Europe will be increasingly closer to the people, and citizens will understand that such an arrangement is positive and advantageous for them," the PM said.

The constitution was also welcomed by the opposition party Smer and the ruling New Citizen's Alliance (ANO), who both opposed the idea of a Slovak referendum on the document.

"Slovak citizens have [already] expressed their positive attitude to the country's integration into the EU in a referendum that was held in May 2003," Katarína Glončáková-Golev from the ANO said on June 21.

"We consider the mandate that the cabinet and the parliament have [based on the referendum result] to be sufficient."

Several states, such as Ireland and Great Britain, have already announced referenda. Other states, like Poland and the Czech Republic, might also decide to organise referenda.

In Slovakia, however, the issue is complicated by the fact that referendum results are not legally binding for MPs and legislators would have to decide on the constitution anyway.

With the issue of the possible referendum on the constitution, a "very difficult constitutional problem," in Minárik's words, discussion of the number of MPs needed to approve the document began.

PM Dzurinda originally said that a simple majority of present MPs would be enough. However, Daniel Lipšic, a KDH member and the Slovak Justice Minister, argued that a constitutional three-fifths majority of 90 votes was necessary.

Lipšic released a statement saying that the constitution transfers some of Slovakia's rights to the EU, which is the main reason the Slovak parliament must approve the document with the larger majority.

Several experts, such as constitutional lawyer Radoslav Procházka, who represents Slovakia at the European Court, agreed with Lipšic on that matter.

Procházka said that it would have been possible to hold the referendum on the EU constitution before the parliament voted on the document, but noted that "because the [result of the] referendum is not binding, the eventual failure [of the popular vote due to low turnout] would not have made an impact on the parliament's chance to confirm the constitutional treaty."

EU member states have two years to ratify the document.

In addition to Smer, the ruling Slovak Democratic and Christian Union, and the ANO, the Hungarian Coalition Party and opposition members the Slovak Communist Party and the Movement for a Democratic Slovakia support the EU constitution.

The communists, however, would support the referendum under certain conditions, and suggested that Slovakia should not rush the ratification of the treaty.

"We should start this after the [2006] parliamentary elections. This would create space and time for explaining the main impact of the EU constitution to the Slovak citizens," party chairman Jozef Ševc said at a press conference on June 22.

According to the Slovak Foreign Ministry, the official translation of the document will not be available until September of this year at the earliest.