THE MOUTH harp, a tiny instrument gripped against one's teeth and played by pulling a string attached to its body, can be found almost around the globe. It is one of the world's oldest musical instruments and its bamboo form, which first originated in Asia, has undergone several transformations.
The mouth harp arrived in Europe around the 16th century and found a home in such countries as Hungary, Switzerland, France, Germany, and Slovakia. 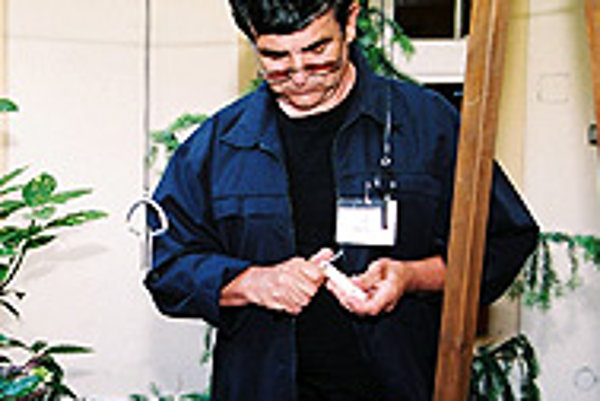 Font size:A-|A+  Comments disabled
THE MOUTH harp, a tiny instrument gripped against one's teeth and played by pulling a string attached to its body, can be found almost around the globe. It is one of the world's oldest musical instruments and its bamboo form, which first originated in Asia, has undergone several transformations.

The mouth harp arrived in Europe around the 16th century and found a home in such countries as Hungary, Switzerland, France, Germany, and Slovakia. It was first made of wood, followed by a combination of wood and metal, until finally it adopted a solely metal form.

Harp maker Peter Sobota from the western Slovak town of Modra recently decided to return to the instrument's wooden origin. For half a year he has been carving harp arches into various ornamental shapes, including horse profiles.

"I have yet to meet anyone else in Slovakia who makes [the harps] out of wood," said Sobota, who is also an active harp player himself, and has been devoted to making the harps for some 20 years.

Bratislava visitors of the Centre of Folk Art Production (ÚĽUV) were able to admire Sobota's wooden harps, which were on display along with folk instruments made by other artisans during the Days of Musical Instruments exhibition, which took place June 16 to 18. At this event, craftsmen held demonstrations of how the instruments are made by hand, as well as how they are played, and theoreticians led discussions about the instruments and their histories.

The event was held with the intent to educate visitors about the country's musical culture and values, as well as to demonstrate how to distinguish between the varying quality of the products.

"Our goal is to point future customers in the right direction and simultaneously to influence producers to keep to the classic characteristics of the products so that people may continue to identify with them," said Martin Mešša, ethnographer and head of the project.

According to Alena Šumša-lová from ÚĽUV, the event featured some of the best producers of folk instruments. Tibor Koblíček, maker of a vast number of instruments, is most likely the only Slovak to have ever learned how to make the ancient ninera, or hurdy-gurdy. Michal Fiľo and Pavel Bielčik presented traditional fujaras and fiddles. Drahomír Daloš, who organises the Bagpipers' Festival in Malá Lehota, displayed his pipes and fujaras as well.

Hunted by collectors and folk music performers from home and abroad, laymen can find the products of these recognised makers at the many folk dance and music festivals held in the country throughout the summer. They are sure to appear in the upcoming Východná and Detva (Folk Festivities Under Poľana) festivals.

In order to remain true to the original culture of the country's past, the products of the instrument makers who collaborate with the ÚĽUV are subject to the eye of the institution's ethnographic jury. The experts monitor the production's development by following the techniques of traditional makers, and by controlling the patterns and colours used in their creation.

"The producers tend to over-decorate the instruments these days, as if that were the most important thing; in the past, the ornamentation was more modest," said Mešša.

"A good musical instrument has to play well, tune well, and be aesthetically pleasing to the eye," he explained. "Decoration is typically used to represent the particular region of the player, or of the instrument's producer, who uses the historical patterns of that region, along with the techniques and skills inherited from his tutor."

The rule of representing one's region through decoration does not always apply to other small instruments (such as the earlier mentioned mouth harp), which were different products created in various craft mediums. All across Europe, potters used to produce ceramic ocarinas, and carvers made various types of fiddles, both of which were by and large found in the same forms everywhere.

"Only the very specific use of colours or glaze could disclose a particular producer," concluded Mešša.