SUSPECTED Bratislava mobster Jozef Svoboda was killed by unidentified gunmen in the second mafia killing this month in the Slovak capital.
Police said that they had not excluded the possibility that the recent killings point to movements or a possible fight for spheres of influence inside the Bratislava underground scene.
"Something is happening in relation to the underworld in Bratislava and the surrounding area," Bratislava Police Chief Ľudovít Mihaľ told media at the Svoboda murder scene on June 28. 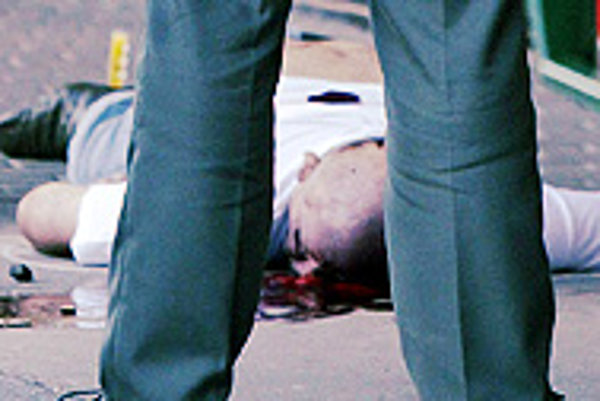 Font size:A-|A+0
SUSPECTED Bratislava mobster Jozef Svoboda was killed by unidentified gunmen in the second mafia killing this month in the Slovak capital.

Police said that they had not excluded the possibility that the recent killings point to movements or a possible fight for spheres of influence inside the Bratislava underground scene.

"Something is happening in relation to the underworld in Bratislava and the surrounding area," Bratislava Police Chief Ľudovít Mihaľ told media at the Svoboda murder scene on June 28.

Svoboda, 48, died immediately after the attackers fired 17 bullets, three of which were lethal.

"They [the shooters] aimed from the back. Three lethal bullets hit him in the head, and several more hit his back," said police spokeswoman Magda Krasulová.

The killing took place in Bratislava's Podunajské Biskupice district in front of the local Terno betting agency. According to media reports, the attackers approached Svoboda as he was leaving Terno and subsequently escaped in a dark van.

"It was a professional murder," added Mihaľ.

Immediately after the killing, police blocked local roads and started a search for the killers. Border crossings were alerted and police asked their colleagues from neighbouring states for assistance. They also employed a helicopter in the search, but the killers were not found.

Svoboda's murder is the second alleged mafia killing in Bratislava this June.

On June 6, Peter H, one of three men in a Porsche Cayenne, was killed by gunfire from another car on one of Bratislava's busiest routes, the Prístavný most bridge.

Just as in the case of the June 6 murder, police do not know the motive for the Svoboda murder yet, Krasulová said.

Mihaľ, however, confirmed that Svoboda was not unknown to the police and that, in the past, officers had looked into his activities in relation to unspecified mafia activities.

"It was an area of illegal activities in relation to the underworld," Mihaľ said.

Svoboda is believed to have been a mighty and influential businessman who was active in gambling and security services. He was also known in the local sports world as a sponsor of sports clubs. Until 2002, Svoboda, a former wrestler, was the head of the Slovak wrestling association and, until last year, was a member of the supervisory board of the Bratislava football club ŠK Slovan.

He came under media attention recently at the World Hockey Championships in Prague when spotted sitting in a box next to several Slovak top politicians at one match.

Police believe that he was killed with nine-millimetre calibre bullet.

The office for combating organised crime will deal with the crime.

Svoboda's group was considered one of the strongest gangs in the Bratislava area along with Sýkorovci and Takáčovci, two other formerly influential gangs.

Ján Takáč was killed in July last year after an unknown gunman fired a series of shots at him from a machine gun. Miroslav Sýkora was killed seven years ago.

Svoboda had many political contacts and in 1993 he contributed money for the newly created independent Slovak Republic after the split of Czechoslovakia. According to unofficial information, he operated in a more sophisticated manner than other mafia heads and was sometimes described as a white-collar criminal.

He was behind a company that held just over a 1 percent stake in the cabinet's hotel Forum. He also owned several restaurants and bars in the Slovak capital and, according to the business register, he was officially involved 10 firms but may have had influence in several others as well.

The Svoboda killing was the sixth within just over a year involving people suspected of involvement in the Bratislava underworld.

Květoň Holcr, a criminology expert with the Slovak Police Academy, said, however, that murders in the underworld do not necessarily mean that mafia crime is retreating.

The killings are "much more likely a generational exchange of the conservative 'godfathers' for university educated managers of crime who are equipped with the latest technologies. A situation without organised crime is almost impossible," Holcr told the Slovak daily Pravda on June 30.

The expert thinks that an increase in criminal activities can be expected with Slovakia entering the EU.

"In the long run it can be expected that the extent of organised crime will gradually reach a balanced level within the European Union, which means a growth of crime in Slovakia," he said.