SLOVAKIA's Liptov region lies between the mountains of the High and Low Tatras. Once a well-kept secret known only to Poles and Slovaks, it is now a prime trekking and cycling destination for some of the world's most famous adventure travel companies, including the highly acclaimed Butterfield & Robinson.
This article describes a moderate 25-kilometre mountain bikeride near the town of Ružomberok, one of the valley's most accessible commercial hubs. 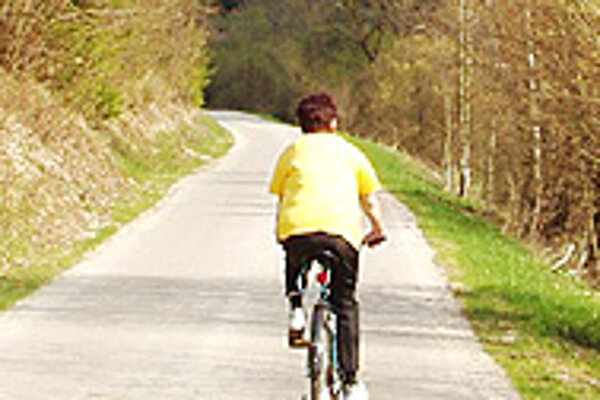 Font size:A-|A+0
SLOVAKIA's Liptov region lies between the mountains of the High and Low Tatras. Once a well-kept secret known only to Poles and Slovaks, it is now a prime trekking and cycling destination for some of the world's most famous adventure travel companies, including the highly acclaimed Butterfield & Robinson.

This article describes a moderate 25-kilometre mountain bikeride near the town of Ružomberok, one of the valley's most accessible commercial hubs. The route offers riders an opportunity to experience some of the region's picturesque countryside and mountains, as well as the historic village of Vlkolínec.

After a week spent in the concrete canyons of Petržalka, Bratislava, the green landscape of Liptov was a welcomed relief. The trip took just three and a half hours by train and cost only Sk400 (€10) for a one-way ticket and a bike carry-on.

Once off the train, I hopped on my metal steed and rode in the direction of Hrabovo, a recreational area near Ružomberok. The trail challenged my physical condition almost immediately. The elevation change from hotel Áčko to the cableway station is around 40 metres, and the ascent to the lake dam is quite demanding. When the main road ended, I hopped off and crossed a meadow on the forest road to the paved road connecting Ružomberok with the Malinô Brdo ski centre. This access road is used exclusively for deliveries, so cars are a rarity. During winter, sledders and skiers use it for a quick downhill ride to the town.

After a seemingly endless ascent, I finally gave up and pushed my bike. For the steep terrain around Liptov, a mountain bike with climbing bar ends is recommended, but any 21-speed touring bike should suffice on the paved bike routes. After 40 minutes of alternating between walking and biking, I reached the meadows of Vlkolínec. Here, I took a break by the little creek, then continued further to the left under Sidorovo (1,099 m) following the trail markings to Vlkolínec.

If you visit during the warmer months, consider a two-hour detour to Malinô Brdo. It is only one kilometre from the meadows of Vlkolínec. Even if the final ascent is the steepest of the entire trip, you will be well rewarded for the effort. Malinô in the spring is like a scene from the Sound of Music; alive with flocks of sheep grazing on blooming meadows. In the summer a chairlift runs to its summit (1,209 m), from which one can see the mountain ranges of the Low Tatras, Big Fatra, Little Fatra, as well as the High Tatras.

A hearty meal is always welcome after a good excursion. Hotel Malina will prepare halušky s bryndzou (dumplings with sheep cheese) and other local specialties (http://www.liptovtravel.com/malina). After you regain your strength, you can head back down to the meadows of Vlkolínec on the steep, paved road.

As one approaches Vlkolínec, the road surface changes from pavement to grass to rocks. Be sure to catch the nice views offered by Haliny, where rock climbers often train. The smell of wood gets stronger and stronger as you approach, as the entire village is constructed from it. Established in the 14th century as a settlement of charcoal makers and woodcutters, Vlkolínec was named a World Heritage Site by UNESCO in 1993, and is the best-preserved example of folk architecture in Slovakia. Upon entering, one will immediately think of Colonial Williamsburg in Virginia or Louisburg in Nova Scotia, but beware: That old grandmother coming out of the gingerbread house in traditional clothes is not an actor but a real Slovak starenka.

When you leave the village, be sure to note the statues of Jánošík and his mother at the end of town. Juraj Jánošík is Slovakia's Robin Hood. He robbed from the rich and gave to the poor, and could apparently move faster than any human on the planet. Inspired by his legend, I quickened my pace during a four-kilometre descent down to Trlenská dolina. In some spots, I hit speeds of up to 50 km per hour. During just a few minutes descent, I covered a vertical of 225 metres and ended up in Biely Potok (White Creek), which is a suburb of Ružomberok.

From the intersection there I followed the bike route to the left along a side street. Route markings suddenly disappeared, but since I was still on the road, I cycled to the garden settlement named Jánska dolina. Ružomberok lay just ahead of me, but there was just one problem: a krava (cow) blocked my path. We engaged in a classic Mexican standoff with neither one of us wishing to make the first move. Finally, I started slowly pushing my bike down the path towards the beast. At the very last minute, she understood what I wanted and let me go around her. That was the last obstacle and after a few hundred metres I was in Ružomberok, the birthplace of Slovak nationalist Andrej Hlinka, and home to a natural history museum, where you can see exhibits of local fauna and flora but, thankfully, no sacred cows.

Bikes have to be at the train station at least 15 minutes prior to departure to be allowed on the train.

Hotel Áèko - located right at the start of the bike route, near the entry to Hrabovo dolina (Hrabovo valley), about three kilometres from the train station. One night starts at Sk900 (€23) per person. www.hotelacko.sk

Hotel Kultúra - located in the centre of the town, about two kilometres from the train station. One night starts at Sk1,700 (€43) per person. www.hotelkultura.sk