THIS year's beer taste-off was a testament to both democratic cooperation and staunch individualism. A group of 11 judges assembled by the Spectacular Slovakia (the Spectator's annual tourist-guide publication, currently in print) bought the beers, developed the system, and did the tasting. Your correspondent had limited powers to guide them. But once the testing began - and it was a sort-of grouchy free-for-all, with everyone shouting out ratings, boos and insults - the judges generally stuck to their guns no matter how much heat they took. 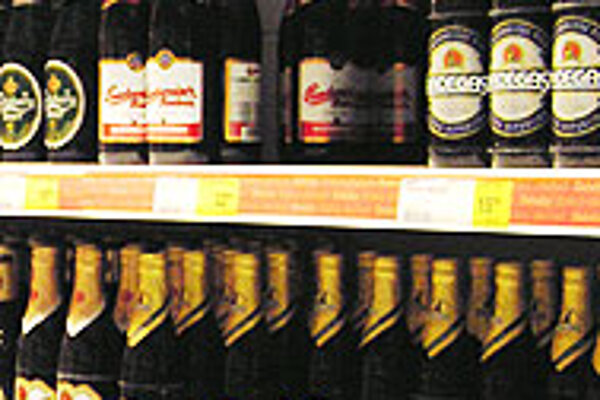 THIS year's beer taste-off was a testament to both democratic cooperation and staunch individualism. A group of 11 judges assembled by the Spectacular Slovakia (the Spectator's annual tourist-guide publication, currently in print) bought the beers, developed the system, and did the tasting. Your correspondent had limited powers to guide them. But once the testing began - and it was a sort-of grouchy free-for-all, with everyone shouting out ratings, boos and insults - the judges generally stuck to their guns no matter how much heat they took.

Case in point was a young American, who gave seven out of 10 to a beer that drew ones and twos from the rest of the panel (except for one Slovak female, who gave it a five). Our British judge asked if the American had "gone mad," and went on to describe the sample in unprintable language. The beer caused our American colleague further embarrassment when it was revealed to be non-alcoholic Topvar.

The method ratified by the panel was that all judges have a benchmark beer, to sip at their leisure and to use as a comparison. The benchmark beer was to be a five out of a possible 10. The brand, which was determined by a cashier at a gas station, was Corgoň.

Corgoň may have been too good a beer for a benchmark. The results certainly suggest so, with the average rating coming in at 4.3. The bigger problem, however, was that the benchmark beer got warmer, while the samples stayed roughly the same temperature or, if anything, got colder in the fridge as the taste-off went on. Corgoň as an unmarked sample won a rating of 6.6 overall, or second place. This suggests that beers tested in later rounds had an unfair advantage.

As a scientific trial, the Great Beer Taste-off 2004 may have had additional flaws. The careful reader will have already noticed that Zlatý Bažant Tmavý, the only dark beer in the bunch, came in at number one. It is indeed a fine beer, but its showing in our trial may only prove that the judges prefer dark beer. (Their first reaction to the sample, though, shows their commitment to scientific principles. As well as receiving the highest rating, Zlatý Bažant dark drew the loudest jeers, too. The judges weren't happy to have the taste-off compromised by an apple among oranges. In the ad hoc inquiry that followed, it was discovered the Bažant Tmavý had been bought by accident.)

What can we conclude from the Great Slovak Beer Taste-Off 2004? Well, the results are now part of public record, but what I will remember more than the numbers is a comment by our cranky British judge, a journalist I will call Mortimer. Mortimer is remarkably enthusiastic about good food, and notoriously harsh with food that does not make the grade. After sipping a slightly bitter sample, Mortimer shook his head disapprovingly, and his face shrivelled up into a twisted pucker, like he had just bitten into a lemon.

But as our taste-off administrator collected the cups, Mortimer held on to his, gulped down the last of the sample, turned to a neighbour on the couch, and said cheerfully, "I have to admit, it's better than most beers I'd get in pubs back home."

There you have it. Slovak beer is so good that even the bad ones are better than what Mortimer gets in England.