Hunting for treasure in Žilina

GETTING to the Budatín Castle is quite an experience. If you have a sense of adventure, enough patience, and a little command of Slovak (or explicit body language), you might eventually find it. The locals are friendly and helpful, but it is not wise to count on their knowledge of English.
Arriving in Žilina is the easy part. 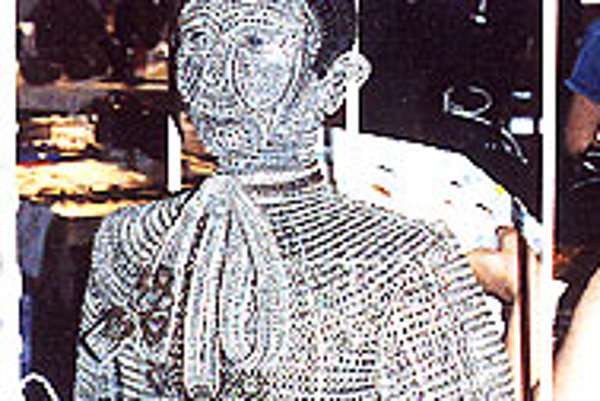 GETTING to the Budatín Castle is quite an experience. If you have a sense of adventure, enough patience, and a little command of Slovak (or explicit body language), you might eventually find it. The locals are friendly and helpful, but it is not wise to count on their knowledge of English.

Arriving in Žilina is the easy part. When approaching by the E50 highway from Bratislava you need to follow the signs reading Čadca, they'll take you to the E75 bypass and over the bridge where the castle first comes into view. The white tower with a brown tiled roof, on your left, shines against the green hilltops. You will not see its scars until you come closer, and this may take time, for its proximity is misleading.

Overlooking the confluence of the Kysuca and Váh rivers, the white rotunda is the oldest part of the castle which has been converted into a regional museum, and that is where you want to go.

Budatín Castle is a poor relative of its counterpart in Bratislava, yet the treasure it hides is well-worth seeing. Rather neglected over the last decades, this beautiful architectural structure shows signs of aging and is in bad need of attention. It deserves as much, as it is part of Slovak history and home to a very special collection not to be found anywhere in the world - the tinkers' works.

While standing at the top of the steps, waiting to be let in, do not look down at the crumbling building behind - it used to be a chapel and will hopefully be restored to its original beauty in a couple of decades. After the guide hears the doorbell, it is best to start the tour on the first floor. There, trapped in a huge birdcage, one can meet the first tinkers.

According historical records, it was about 300 years ago when boys and men from poor villages of northern Slovakia left their homes in search of work. They had nothing but a reel of wire and a krošňa (toolbox) on their back. This was for carrying pliers, awls, hammers and other simple tools to work with the wire. They used this cheap material, their deft hands, and ingenuity to mend old pots, cracked bowls, and broken jugs.

Roaming the lands of Poland, France, Germany, Switzerland, Italy, and Russia, the Slovaks became known as a nation of tinkers and hard-working people whose exceptional craftsmanship was highly valued and much appreciated all over Europe. Some even dared to cross the ocean and sailed to America, Canada, Brazil, or Argentina, others ventured to the Far East and Australia, or southward to Africa.

Apart from fixing damaged pottery, they made handy objects out of wire and tinplate such as kitchen utensils, household wares, birdcages, garden furniture, but also children's toys and decorative pieces, all of which were pretty and fashionable articles that sold well. Not surprisingly, some of the more entrepreneurial tinkers earned enough money to set up their own factories and turned into wealthy, respectable businessmen.

Sounds like a fairy-tale? The enormous birdcage offers all the evidence - you can have a look at their passports, traveller's cards (some in German or Hungarian), read their correspondence, or peruse old documents of wirework factories. Look up and you will see yet more birdcages hanging from the ceiling, as well as models of airplanes, a hovercraft, and a huge globe - a symbol of their wanderings.

Lower your gaze to observe delicate bowls and vases made of copper, zinc, and silver-coated wire. Admire Drotária, a wire reconstruction of a tinkers' village, or look at a life-size model of a Slovak tinker. Next door, still more curiosities await to catch your eye and get your undivided attention. These are works of new masters, self-made or professional artists devoted to the unique craft of wire bending, binding, and weaving.

They come to Budatín Castle every year on the second weekend in June to exhibit their work and get inspiration. This year's fair was a hive of creative activity that attracted about a 1,000 visitors from all over Slovakia and abroad. One could meet present-day tinkers (it has ceased to be a male-dominated craft), talk with them and watch them at work. Make sure you put the event on your calendar for next year.

Meanwhile you can see their exquisite artwork displayed on the ground floor. The wire in the 2004 exhibition is a sampling of various handmade works of 54 artists from Slovakia, the Czech Republic, and two pieces by Julia Griffiths Jones from Britain. It is a dazzling display of traditional tinkers' craft, decorative artwork, design and jewellery.

The Variations of Wire exhibition is open until September 1. For more information call 041/5620-033.

Note: Want to try your own masterpiece? All you need to do is to buy a book on wirework by Katarína Hallonová and Mária Krajčová, Drôtovanie s džarkom Markom, (it is available at the castle), get a good translator or a Slovak teacher, and follow the step-by-step instructions of Krajčová who is a craftswoman herself as well as a good photographer.