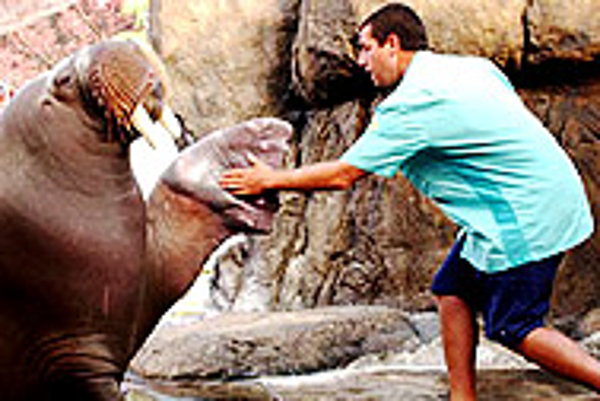 ADAM Sandler can be a lot to stomach sometimes. A sane person can take only so many poop jokes before feeling dirty, cheapened, or physically ill. But, as demonstrated in The Wedding Singer, Paul Thomas Anderson's fantastic Punch Drunk Love, and now 50 First Dates, Sandler is capable of much more than obnoxious juvenility.

These films truly succeed in how they break from the rest of Sandler's work. Instead of simply hovering in the world of bodily functions and adolescent pranks, they explore the awkward humour found in romantic longing. In The Wedding Singer, Drew Barrymore played the object of desire. In her, Sandler found his perfect romantic foil.

Though (or, perhaps, because) she famously grew up very quickly - she reportedly started drinking at the age of nine and doing drugs shortly thereafter - Barrymore has retained a remarkable childlike quality. She has an adorable sense of innocence and wonder that brings out the better parts of Sandler's equally childlike persona. Rather than merely acting immaturely, he seems sweet and vulnerable, albeit with a glint of adolescent mischief.

To not alienate Sandler's core audience of mainstream teenage movie-goers, 50 First Dates retains some of the juvenile humour. Bodily fluids, bad ethnic impersonations, gay jokes, gender confusion - it's all there. And at first, it almost looks like that's all there is.

But just as things look dangerously bleak and oh-so-familiar, light flashes across the face of Henry Roth (Sandler), a veterinarian who's terrified of committing to a woman, as he sits by himself in a local diner. Looking up, he finds something simultaneously mundane and miraculous: A pretty young woman holds a knife glistening in the bright Hawaiian sun, which filters through the diner's large windows. It is through this pretty young woman, Lucy Whitmore (Barrymore), that Henry and the film find their charm.

Immediately smitten, Henry courts Lucy. But, as he soon learns, she lost her short-term memory after an intense car crash. Every day she wakes up having completely forgotten the events of the previous day. Her family and friends carefully try to prevent her from learning the awful truth that a year has gone by and she has no recollection of it whatsoever.

Though ordered to stay away from her, Henry secretly invents new ways to talk to her. Her family eventually finds out but, once convinced of his good intentions, allows the meetings. Every day, after she wakes up not knowing who he is, he must woo her all over again. To her, every day is their first date.

Barrymore is wonderful at communicating the perpetual state of excitement, confusion, and abandon that comes along with any burgeoning love, regardless of age. And Sandler is right there with her, goofy and nervous as they constantly (re)discover one another.

There may be something perverse about the whole concept - woman wakes up, discovers she's dating some random guy, and has absolutely no idea what they've done together, sexually or otherwise - but Barrymore and Sandler give the movie so much feeling that it simply doesn't matter. Fortunately, the heart is apparently the body part that Sandler now wants most to explore.