THE SLOVAK Intelligence Service (SIS) has caused Slovak Agriculture Minister Zsolt Simon a serious headache by sharing its suspicions of corruption within his department with the public.
Simon said that battles over state budget allocations might be behind the move, as he is demanding an additional Sk2.7 billion (€68 million) for Slovak farmers from the state coffers 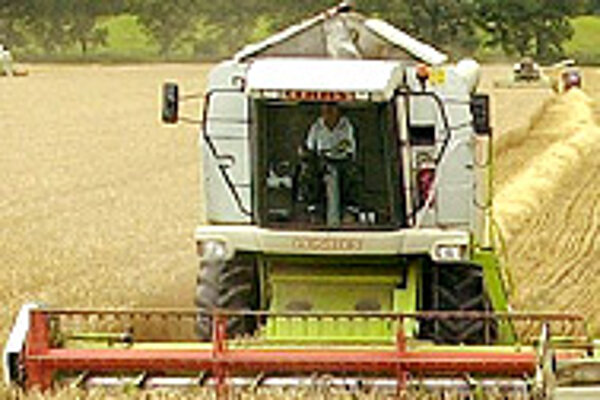 Font size:A-|A+0
THE SLOVAK Intelligence Service (SIS) has caused Slovak Agriculture Minister Zsolt Simon a serious headache by sharing its suspicions of corruption within his department with the public.

Simon said that battles over state budget allocations might be behind the move, as he is demanding an additional Sk2.7 billion (€68 million) for Slovak farmers from the state coffers. The minister also noted that farmers have seen higher subsidies this year while the SIS has gotten Sk200 million (€5 million) less.

On June 25, the SIS reported that between 2002 and 2004 it provided state bodies with 14 corruption reports pertaining to the distribution of state subsidies to farmers and agricultural companies.

According to the report, corruption is widespread in the process of granting subsidies and officials often overlook and tolerate the use of subsidies for purposes other than those originally planned, the news wire SITA wrote.

Simon noted that, of the 14 reports, only five cases pertain to his administration and that the ministry's department of control has checked 78 selected farmers and organisations that received subsidies.

Simon says that he reported eight cases to criminal prosecution bodies, three cases went to the general prosecution, and six cases were reported to financial control bodies of the given regions.

The ministry also claims to have taken special measures to eliminate loopholes.

"We have taken several systematic steps to eliminate the abuse of the system of subsidy allocation for farmers. Since October 2003, the ministry has published information on the allocation of subsidies on its website," spokeswoman of the Agriculture Ministry, Katarína Czajlíkova, told The Slovak Spectator.

According to Czajlíkova, the ministry also reinforced its internal tools of control and created a special section to oversee the process.

"The members of the selection committee are nominated ad hoc, only one or two days before the decision making so that no one knows who must be 'persuaded'. Moreover, from January 1, 2004, the committee is no longer operating, as the process has been computerised," Czajlíkova added.

Deputies of the parliamentary committee to oversee SIS activities have requested Prosecutor General Dobroslav Trnka to check whether the SIS violated the law by informing the public about corruption suspicions linked to the distribution of subsidies for farmers.

"We feel that the spokesman of the SIS has violated the law in this case," said Committee Chairman Viliam Soboňa.

SIS Director Ladislav Pittner said that the service had not violated the law when publishing the information. He referred to the law on free access to information, which opens the door for revealing information on suspicions of corruption.

However, Ivan Šimko, a member of the Defence Committee, said that the law governing the SIS was violated when the suspicions were made public as the intelligence service has a strictly defined group of addressees who can access information it provides.

Shortly after the SIS published its suspicions, the Finance Ministry also released its report on an Agriculture Ministry audit.

Béla Bugár, the head of the co-ruling Hungarian Coalition Party, said recent events concerning the Agriculture Ministry might be linked to the growing struggle for the 2005 state budget.

"The Finance Ministry considers linking the cause of corruption suspicions pertaining to the distribution of subsidies to farmers with the preparations of the state budget a meaningless argument," Mikuláš Gera, head of the Finance Ministry's press department, told The Slovak Spectator.

Bugár said that if it turned out that the Finance Ministry had not conducted such an audit at other ministries, his party would take action.

The Finance Ministry has also audited the Education Ministry.

Education Minister Martin Fronc told the daily SME that he hopes the inspection was not politically motivated.

Simon said he did not want to carry responsibility for the results of the financial audit that the Finance Ministry conducted on his department, claiming that the inspection did not pertain to the time of his administration.

"I do mind that the material is structured as though it evaluates the current period, while in reality it is based on the years of 2001 and 2002," Simon told the Hospodárske noviny daily.

The SIS had warned in 2000 that non-transparent rules for granting subsidies made space for corruption.

On June 30, the Slovak Agricultural and Food Chamber protested the creation of a generally negative image of the agricultural sector in association with the recent SIS report. The chamber said that it had distanced itself from bodies that abused the system, the news wire SITA wrote.

Ivan Oravec, the chamber chairman, said that the majority of companies within the sector perform their business in compliance with the law and that the reported bribery cases only concern 0.3 percent of a total 4,000 companies that apply for subsidies annually.