SLOVAK jails are packed with convicts and the cabinet is ready to invest in the construction of new prisons.
According to a document on prisons that the government approved on June 30, the Justice Ministry plans to increase the capacity of local jails and facilities for those awaiting trial in custody by around 2,000 places by 2010. 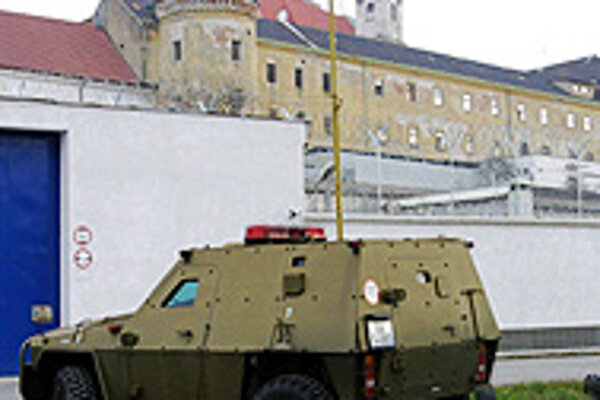 Font size:A-|A+0
SLOVAK jails are packed with convicts and the cabinet is ready to invest in the construction of new prisons.

According to a document on prisons that the government approved on June 30, the Justice Ministry plans to increase the capacity of local jails and facilities for those awaiting trial in custody by around 2,000 places by 2010.

It remains unclear how much money will be needed for the investment, but the recently planned reconstruction of a jail in Bratislava that should increase the facility's capacity by 150 beds will cost around Sk500 million (€13 million), according to the report.

In addition to the special investments, the regular cost of housing one prisoner for a year is almost Sk300,000 (€7,525) and the creation of one new space costs an extra Sk1 million (€25,085), the Justice Ministry's report states.

"We expect that gradual reconstruction work will take place [until 2010] in the existing facilities. We are trying to find solutions that would be most effective for the taxpayer," Justice Minister Daniel Lipšic said at a press conference on June 30.

Currently, the total capacity of Slovakia's 17 jails and detention centres is 9,605, and the number of prisoners and people in custody is 9,481 - only 124 short of full capacity.

According to the Justice Ministry's statistics, the number of convicts and charged people grew by 325 in 2002 year-on-year and by 1,111 in the following year. In the first five months of this year it was up by another 612 people.

"This results from the more efficient work of the police and the whole judiciary," Lipšic said.

Prisons, however, are expecting a new influx of convicts shortly as the Slovak courts have started dealing with cases of repeat violent offenders who, according to last year's legislative changes, may be sentenced to jail without parole for up to 25 years under the three strikes and you are out principle.

Lipšic and his team designed and pushed through the law in an effort to remove violent offenders from the streets.

"In the Slovak courts, proceedings involving offenders who have broken the three strikes and you are out principle are already taking place," the minister said.

The reconstruction and the planned investments will be carried out not just to create space for the growing number of convicts, but also to improve the living standards of prisoners.

Slovak jails respect the norms set by the European Council in terms of the space per convict, which is 3.5 square metres.

In the neighbouring Czech republic, however, prisoners have around four square metres each.

"That is the standard we want to be heading toward as well," said Lipšic.

Many jail buildings, however, were built more than a decade ago. The one in Bratislava, for instance, was built in 1936, the report states.

This often complicates reconstruction work and the overall state of the jail buildings and their internal conditions.

One unnamed convict told the public broadcaster Slovak Television on July 3 that "[while] in custody there was a problem that there were many people locked up in a small space."

"So [the problem was] the small space and insufficient hygiene," the convict said.

"We expect that the planned reconstruction work will also increase hygiene standards," said Milan Jašurek, the deputy of the secretary general of the Slovak Prison and Judicial Guards.

He insisted, however, that Slovak prisons were comparable to similar facilities in Western Europe.

He told journalists that Slovak prisons were also planning to enable convicted mothers to care for their children by extending jail premises for them. Current Slovak laws only enable convicted pregnant women and mothers with children younger than one to delay the start of their term.

An amendment currently in parliament would enable mothers to have their children remain with them in prison up to a certain age.

"This should take effect in January 2005," said Jašurek.

According to the report, the level of treatment for convicts has improved in recent years.

Convicts have the opportunity to attend various education and re-qualification courses, and they can spend time in interest clubs including gardening, reading, art, and various technical courses. Prisoners can also work if they wish. According to the Justice Ministry report, the average employment rate among the prisoners last year was 64.6 percent. On average, the prisoners earned around Sk2,447 (€61) a month.

Jails provide convicts with counselling and psychological services, and they also enable prisoners to attend masses and various other religious activities.

The improvements were partly driven by an investigation the European Committee for the Prevention of Torture carried out in 1995 and again in 2000, and subsequently delivered to the Slovak government.

Among other issues, the 2000 report mentioned overcrowding of cells as a continued problem in some prisons in Slovakia. It also stated that, "the situation as regards activities also left much to be desired."

"Only two of the 491 remand prisoners held at Bratislava Prison worked and no other form of organised activity was being offered to such prisoners" the 2000 report stated, adding, on another note, that "health care staffing levels were in some respects inadequate" in some prisons.

According to the Justice Ministry, however, the realisation of the basic recommendations of this report would require around an extra Sk313 million (€8 million) in capital and current expenditures for 2003 - 2006.