A matter of time

THE NUMBER of people over the retirement age in Slovakia increased in 2003, showing yet again that Slovakia's population is growing older. Indeed, demographers have been sounding the alarm over the impact this trend may soon have on the country's economy.
However, as if out of the sky, the Statistics Office released data showing that, after 23 years of continuous decline, Slovakia's birth rate grew in 2003. Will it be enough to save the economy from collapse? 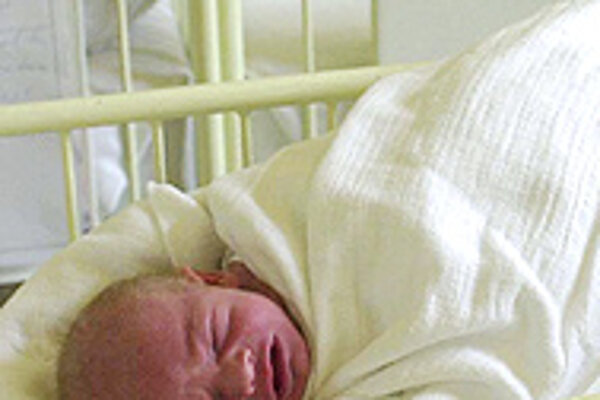 Font size:A-|A+0
THE NUMBER of people over the retirement age in Slovakia increased in 2003, showing yet again that Slovakia's population is growing older. Indeed, demographers have been sounding the alarm over the impact this trend may soon have on the country's economy.

However, as if out of the sky, the Statistics Office released data showing that, after 23 years of continuous decline, Slovakia's birth rate grew in 2003. Will it be enough to save the economy from collapse?

"The aging of the population influences the country's economy. It requires principal changes to social, health, and pension insurance, but also to employment policies," demography expert Boris Vaňo told the SME daily.

Demographers predict that the Slovak labour market will be hit with the problem of an aging population around 2010, when a large number of people born in the post-war period will reach their retirement age with only a small group of young people born in the mid-1990s to enter the workforce.

However, the Ministry of Labour, Social Affairs, and Family does not expect any serious problems.

"It is a general trend. We are not concerned that it could start causing low revenues in the state budget in the near future. However, Slovakia has taken at least one very important step to take care of its retired citizens, which is the old-age pension reform," Peter Húska from the ministry's press and media department told The Slovak Spectator.

"The introduction of personal saving funds, which should be launched at the beginning of next year, will secure an appropriate replacement for citizens' incomes when they reach old age," he added.

According to Húska, the second step is to prepare a new family support policy, which will broaden the possibilities of family allowances.

Demographers say the main reason behind the aging population is that people tend to live longer but the birth rate is decreasing.

From 1979 to 2002, the number of live births dropped by a half. Recent data that more children were born last year than during the previous year has given some reason for optimism.

"The Bratislava region posted the highest jump, and moderate decreases were posted in the regions of Trenčín, Žilina, and Prešov," Peter Mach, director of the Slovak Statistics Office, told the press on June 30.

He added that the eastern region of Prešov had the highest birth rate.

The number of children born outside of marriage has been increasing as well. The office reported 12,073 such births in 2003, up 1,089 compared to 2002. This accounted for 23.3 percent of total live births.

Other demographic developments have seen changes as well.

"The growth of the birth rate certainly pleased us and it is good news for Slovakia, especially when, in the last years, an opposite trend was prevailing, especially in Europe," Húska said.

However, he added that it was difficult to find effective instruments to prevent the population from aging in the long term.

Sociologist Magdaléna Piscova is sceptical about the further growth of the birth rate, and attributes last year's positive results mainly to the arrival of a strong generation born in the mid-1970s.

"I know that a lot of optimistic statements have been made on this topic, often it is being attributed to the improvement of our socio-economic situation. However, in my opinion we cannot talk about any change in this respect. On the one hand, one calendar year is a very short period to be considered as a basis for any long-lasting trend, and on the other, the growth of the birth rate was very, very moderate," Piscova told The Slovak Spectator.