ON THE OCCASION of the Netherlands taking the presidency of the Council of the European Union, Dutch glass artists opened an exhibition of their art in Slovakia on July 1. Entitled Glassmovement.nl, it is a colourful show of contemporary works by 20 artists on display at the Bratislava City Museum. 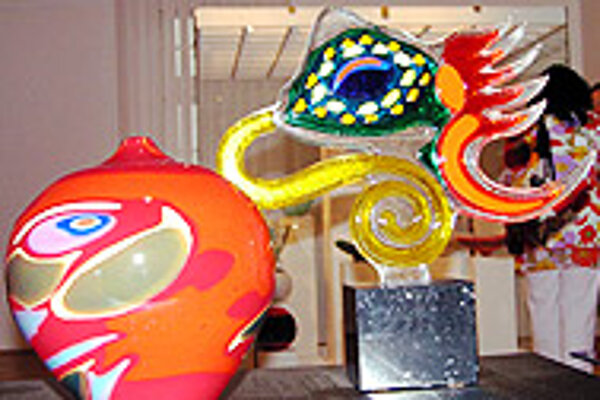 Font size:A-|A+  Comments disabled
ON THE OCCASION of the Netherlands taking the presidency of the Council of the European Union, Dutch glass artists opened an exhibition of their art in Slovakia on July 1. Entitled Glassmovement.nl, it is a colourful show of contemporary works by 20 artists on display at the Bratislava City Museum.

"This is the first time Dutch artists have exhibited their work in Slovakia on such a large scale," said one of the exhibiting artists, Rachel Daeng Ngalle.

The idea to invite the glassmakers to Slovakia came from the Slovak sculptor and glass artist Ľubomír Ferko, who has been exploring the Dutch art scene and cooperating with artists active in the field for over a decade.

After returning from the US in the early 1990s and feeling restricted by the tight limits of his homeland's arts scene, he began to search for "his place in the suddenly accessible European arts scene". He first met with Dutch artists in 1992 at the International Glass Symposium held in the Czech town of Teplice.

"That was the beginning of our collaborative relationship," Ferko said, adding that he gradually got to know the art scenes in the Netherlands, France, Germany, and several other European countries.

"It was especially in the Netherlands, where I met many helpful colleagues, sensitive and receptive collectors of art, and gallery owners with integrity. Thanks to this creative exile, I have acquired not only a new confidence in myself as a sculptor and a glass artist, but also possibly a future home. And that is why, after 10 years of this symbiotic relationship with the Dutch, I've decided to repay them for all these positive experiences by organising this exhibition."

It took Ferko two and half years to manage to gain financial support for the exhibition and find a suitable location to hold it. Apart from financial injection from official institutions, all the participating artists also contributed their own money to make the project possible.

"I forgot to thank all of the artists in my speech," remembered Ngalle when talking with The Slovak Spectator shortly after she spoke on behalf of the Dutch glassmakers during the exhibition's opening. "So, I would like to do it now."

Her multi-coloured objects displayed in the middle of the exhibition room provide a contrast to the austere-coloured, vase-like items of her husband, Willem van Oijen. Both take their inspirations from nature, particularly the underwater world, though each in a different way.

"The work I brought with me is organic work. It's inspired by underwater life, like the tube sponge. I combined these forms with [patterns] I found in the culture of Australian Aborigines. I am very interested in old cultures around the globe, and the influence of nature in their artwork, which I try to translate into my work," said Oijen.

Ngalle is attracted by colours and how nature uses them. "Well, I just love nature and colours and I combine them together; also including a humorous aspect."

It is the first time the couple has visited Slovakia. Even though they did not have any particular expectations of the country, they thought it would have more of a traditional, rural atmosphere.

"We didn't think it would be this modern, well we have only seen the city of Bratislava. I don't know why we had that idea... but looking at the teenagers, they are exactly the same as in Amsterdam."

The artists agree that the recent EU enlargement will enrich mutual cooperation in the art field. It has brought more freedom for the exchange of ideas and techniques, as well as having eased the process of organising international exhibitions.

"The borders have always been free for us to enter the Slovak art scene, but it used to be difficult to enter, and now it's wonderful how artists can travel and meet. Putting up exhibitions like this one has never been so easy, especially when it is a travelling exhibition," said Ngalle.

After Slovakia, where it begins its tour, Glassmovement.nl will head to Budapest, then Vienna, and it will close in the Netherlands.

"[The displayed work] acts, in more than one sense, as a cultural bridge between the Slovak Republic and the Netherlands; two countries that are generally renowned for their glass art," said Steef van den Berg, the press officer of the Embassy of the Netherlands.