THE PALETTE of diversified traditional Slovak folk dance is now available on DVD.
The renowned Lúčnica ensemble recorded the best of its repertoire on DVD when celebrating its 55th anniversary last October. The hour-and-a-half long programme is narrated by long-time Lúčnica artistic director, Štefan Nosáľ, and includes footage documenting the group's development. 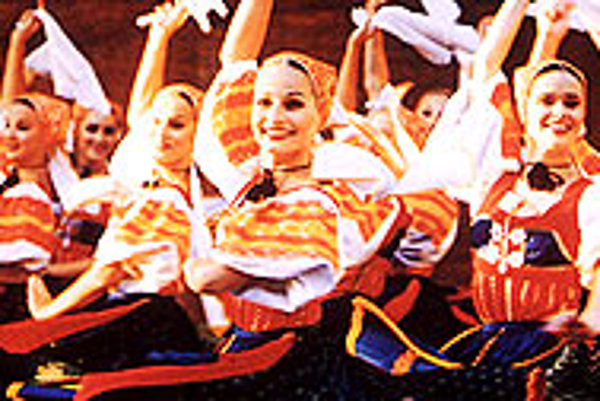 The renowned Lúčnica ensemble recorded the best of its repertoire on DVD when celebrating its 55th anniversary last October. The hour-and-a-half long programme is narrated by long-time Lúčnica artistic director, Štefan Nosáľ, and includes footage documenting the group's development.

During its 55 years, the ensemble has become the acclaimed representative of Slovak traditional culture both at home and abroad. Habitants of nearly 60 countries spanning all five continents have been graced by their performances. In 1956 the group toured South America for half a year.

To celebrate the anniversary, Lúčnica prepared a programme compiled of 15 shows that "have lifted viewers from their seats". They began presenting the shows to the public in the beginning of last October. Professional film cameras were used to make the recording.

The shows portray the dances and traditions of various regions around Slovakia. Several cameras were used to take in views of the dancers from the front, side, as well as the top, which nicely captures the wide-twirling skirts. Some of the best moments are shown in slow-motion, allowing the viewer to truly appreciate and take pleasure in the fancy footwork.

The passionate and dynamic couples dance The Šariš Polka to open the programme and the ceremonial, lively Zemplín Festival closes it; both works were put together by choreographer Nosáľ and acclaimed composer, Svetozár Stračina. In Spring Arrives, the peaceful show celebrating spring traditions, male viewers are sure to admire the reputed beauty of the Lúčnica female dancers. Actually, this can easily be done throughout almost the entire programme. The time to be in awe of masculine might comes right after Spring Arrives. The Shepherd's Night features the demanding jigs of the Slovak mountains, including the famous "odzemok" jumps, "valaška" twists, and whip cracks. Among other performances, viewers can see the traditional Hat Dance, Tossing Dance, Carnival Stick Dance, and a Gypsy Night dance.

The dance stunts are accompanied by a 36-member orchestra compiled of new, and former Lúčnica musicians who got back together especially for the occasion. The six-member Devil Violin, the group's hometown orchestra, delivers two individual performances on the DVD - a battle of violin masters, and virtuoso melodies with a dulcimer solo.

The DVD's menu also contains 10 minutes of programme highlights - a representative summary of the ensemble's presentation of home traditions that "have always been strong in the country", according to Nosáľ.