MP GABRIEL Karlin and the high-standing municipal official Milan Mráz, office head of the Banská Bystrica regional government, both of whom are charged with bribery, made their initial pleas in the first Slovak corruption court trial ever to include an active MP.
The main court proceedings took place on July 8 in the Banská Bystrica District Court where both Karlin, an MP for the opposition party Movement for a Democratic Slovakia (HZDS), and Mráz pleaded not guilty. 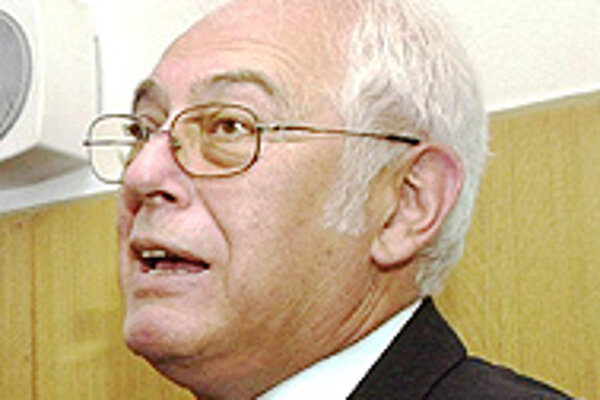 Font size:A-|A+0
MP GABRIEL Karlin and the high-standing municipal official Milan Mráz, office head of the Banská Bystrica regional government, both of whom are charged with bribery, made their initial pleas in the first Slovak corruption court trial ever to include an active MP.

The main court proceedings took place on July 8 in the Banská Bystrica District Court where both Karlin, an MP for the opposition party Movement for a Democratic Slovakia (HZDS), and Mráz pleaded not guilty.

Both men are suspected of demanding and accepting a Sk500,000 (€12,000) bribe for helping a private businessman get a municipal contract for the construction of a gym at one elementary school in the central Slovak town of Žiar nad Hronom.

The businessman, Juraj Hromada, from the company TechnoTrade, contacted the police and after handing over the cash on November 25 in Karlin's HZDS office in Banská Bystrica. Police subsequently arrested both officials.

"I do not feel guilty," Karlin told television crews attending the proceedings.

"I not only do not feel guilty, I am not guilty," said Mráz.

Both men then told the court's senate that they considered the case an attempt to discredit them, and later even accused each other of plotting the discrediting attempt.

Karlin alleged that an order for him to be discredited came from Bratislava and that the Slovak Intelligence Service played a role in the case as well.

He would not, however, specify what that role was, while the service denied involvement in the affair.

Back in November 2003 when police arrested the men, the cash was found in Karlin's suitcase. He said under oath that he had no idea how the money got into his suitcase. Meanwhile, Mráz said that he never even saw the envelope with the money.

Hromada, however, told public broadcaster Slovak Television that the accused were now trying to pass off responsibility and "they will now try to get out of it somehow, even if it means laying the blame on someone else".

Hromada also said that, after putting the envelope with money in front of Mráz, the latter promised to get Hromada's company even more municipal contracts.

According to Gabriel Slobodník, chief justice of the Banská Bystrica District Court, it is "not possible to tell how long the proceedings will take."

"It is very hard to estimate when the case may be closed. The accused may launch an appeal procedure, which would cause a further time delay [until the delivery of the final verdict]," Slobodník told The Slovak Spectator on July 12.

If the two are sentenced, it will be the first time in the history of Slovakia that an active MP is put behind bars.

The case has attracted attention because of the charges of corruption, something that all Slovak cabinets so far have pledged to fight but on which few results have been seen, according to popular opinion.

Karlin's peers from the HZDS parliamentary caucus are cautious in expressing support for their colleague.

"Now that the case is in the courtroom, it is hard for us to comment on it," Ján Kovarčík, the HZDS deputy chairman, told The Slovak Spectator.

"If he [Karlin] is guilty he will be sentenced. We will comment on the case after the verdict," Kovarčík said.

Karlin and Mráz were held in custody from their arrest in November until the police investigation was completed in March 2004.

After he was released from custody, Karlin returned to work in parliament, causing a stir in the assembly.

After spending some time on a holiday, Mráz also returned to work in the Banská Bystrica regional government in mid June.

On June 23, Zoltán Boros, a regional MP, protested Mráz's return to work, arguing that, although he was not commenting on Mráz's guilt or innocence, he thought that it would be better for the image of the region if Mráz stayed away from the public eye for a while.

"It would be better if he remained in the background, away from the job until the court resolved the case," Boros told the private news agency SITA on June 23.

Boros also said that it would "look bad to the public" to have an official accused of corruption carry out the office.

But Petra Polievková, the Banská Bystrica regional spokeswoman, said that the region respected the presumption of innocence and therefore saw no reason to put Mráz outside his duties.

"Until a proper court verdict, we see no reason to change this stance," Polievková said on July 12.