THE RECENT sentencing of a Swedish pastor to one month in jail for offending homosexuals has stirred protests by Slovakia's ruling Christian Democratic Movement (KDH), and one of the party's officials even took his personal protest to the Swedish ambassador in Slovakia, Cecilia Julin, on July 13.
Interior Minister Vladimír Palko told Julin that he had no choice but to protest the sentencing of the Pentecostal pastor, Ake Green, who was found guilty of offending homosexuals in a sermon that took place in 2003. 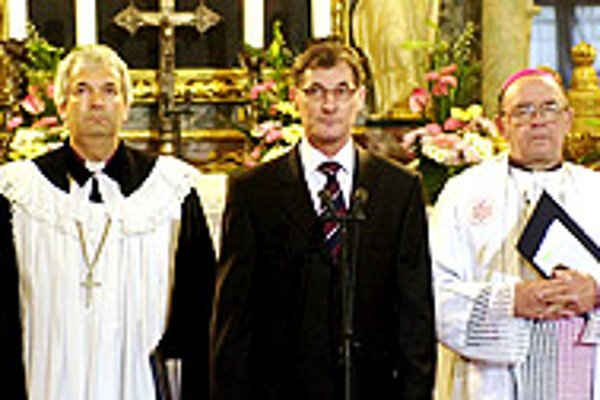 Font size:A-|A+0
THE RECENT sentencing of a Swedish pastor to one month in jail for offending homosexuals has stirred protests by Slovakia's ruling Christian Democratic Movement (KDH), and one of the party's officials even took his personal protest to the Swedish ambassador in Slovakia, Cecilia Julin, on July 13.

Interior Minister Vladimír Palko told Julin that he had no choice but to protest the sentencing of the Pentecostal pastor, Ake Green, who was found guilty of offending homosexuals in a sermon that took place in 2003.

According to the global news service Ecumenical News International (ENI), Green described homosexuality as "abnormal, a horrible cancerous tumour in the body of society".

In an effort to protect freedom of expression, the KDH has organised a special press conference regarding the matter with the party's highest officials protesting the court's sentence. Palko even suggested that this was an example of how "a left wing liberal ideology was trying to introduce tyranny and misuse the EU for this purpose".

Palko said that this also explained why his party was against the approval of the anti-discrimination law in Slovakia. The legislation was approved just recently despite KDH's opposition.

"In Europe people are starting to be jailed for saying what they think," Palko said.

The KDH chairman, Pavol Hrušovský, added that this was "a breach of human rights, the right to religious freedom, and the right of expression".

After meeting with Palko, ambassador Julin said that states have the right to hold different opinions regarding court verdicts issued in other states. She added, however, that, "Swedish law states that public addresses cannot be used to instigate hatred towards a certain group."

The KDH's comments surprised their political peers and some even said that the Christian Democrat's protests may even put international blame on Slovakia.

Jozef Banáš, a member of another ruling party, the Slovak Democratic and Christian Union, said that the "KDH's activities are damaging to Slovakia".

He said that Palko's protest as well as a letter in the works that Hrušovský, speaker of Slovak parliament, plans to send to his Swedish colleague would make Slovaks look "like total idiots".

Marián Vojtek, head of a Slovak gay rights group Ganymedes, said to The Slovak Spectator that his group agreed with the Swedish court's verdict and hoped that the decision would stop people from speaking badly about homosexuals.

"If someone is making such statements publicly it should not go unnoticed because this is an incitement to hatred towards homosexuals. The same would apply if the person would be talking about any group of people whether it's Jews, black people, or anybody else," said Vojtek.

In regards to the KDH's opposition to the verdict, Vojtek said that it was typical of the party to "discuss homosexual issues during the political dry season".

According to Marián Gavenda, spokesman of the Slovak Conference of Bishops (KBS), "if a priest directly offends a person, laws apply to him just like to any other person."

He added, however, "we would be unhappy if, on the other hand, a civilian authority disabled the Church from calling things the right names. We would consider that discrimination," Gavenda said.

In an interview with The Slovak Spectator Gavenda also said that he did not consider news reports about Green's case to be sufficient for him to be able to carry out a thorough evaluation of the matter.

He noted that, "If he was only tried for condemnation of practiced homosexuality, which from the Biblical point of view as well as the point of view of the Church, is immoral the sentence was certainly unjust."

According to ENI, Soren Andersson from the Swedish Federation for lesbian, gay, bisexual, and transgender rights, said that religious freedom could never be used as a reason to offend people.

In a statement issued by the KBS back in May of 1999, Gavenda said the Slovak bishops "differentiated between a person with homosexual orientation, to whom respect must be paid and who has to be incorporated into the common parish community life, and a person who practices homosexuality in intimate life with persons of the same sex."

"It is not considered right that marriages between persons of different sex who create families have the same social status as partnerships of homosexuals even though the possibility of child adoption by the latter type of partnership is refused," said Gavenda.

When asked what he thought about the KDH's opinion that the liberals and left-wing groups were trying to misuse the EU, Gavenda said: "It is true that in a social atmosphere created by the media as well as in the trends of the European legislation, a misuse of antidiscrimination laws can be observed in a sense that topics tabooed by liberal groups cannot be freely touched upon.

"In this sense it can be seen as a 'velvet tyranny'," he said.

"We think that in the 21 century all expressions of discrimination should be condemned. This case is even sadder because it involves a representative of the Church that is an institution that should spread reconciliation and good coexistence among people," Katarína Glončáková-Golev, deputy chairwoman of the fellow ruling coalition member the New Citizen's Alliance, said in a media statement.