THERE HAS BEEN some progress in the public perception of the Roma over the past 10 or 12 years. Issues that were once cloaked with silence are now being openly discussed as people are realising that there exist some urgent problems that concern all citizens just as much as they concern the Roma, said cabinet plenipotentiary for the Roma community, Klára Orgovánová, in an interview with The Slovak Spectator. 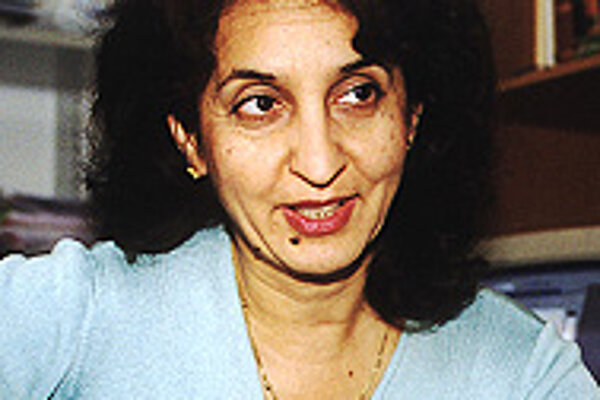 THERE HAS BEEN some progress in the public perception of the Roma over the past 10 or 12 years. Issues that were once cloaked with silence are now being openly discussed as people are realising that there exist some urgent problems that concern all citizens just as much as they concern the Roma, said cabinet plenipotentiary for the Roma community, Klára Orgovánová, in an interview with The Slovak Spectator.

The Slovak Spectator (TSS): Have you noticed any positive effect of the anti-discrimination legislation in the Roma community? How can the law improve the situation of the Roma?

Klára Orgovánová (KO): At this point I have no information on positive effects of the application of the law. Despite numerous objections posed during the adoption of the law, I am certain that it is important that a single anti-discrimination legislation exists. First of all, it can help by penalising some of the common stereotypes to which society often failed to react or tended to overlook.

The effectiveness of the law will be reflected in whether or not those who are affected by it use it. I think that once it is explained to people how this law can help them to improve the quality of their lives and to defend their rights, that then even the Roma will be able to use the law to reduce the discrimination they face in the labour market. It will hopefully result in the erasure of those stereotypes that we do not really feel like talking about, and towards which the Western world has been so sensitive.

TSS: A new draft Penal Code now under its second reading in parliament no longer contains the article on the "defamation of nation, race, and belief".

KO: I am not a lawyer and I only know that which appears in the media. I do not know to what measure the article has been used so far. I think that in the process of educating the nation and building a civil society it is important that such a law exists and that it gives direction. We have not reached the point where we no longer need these laws because we are still conscious of it.

TSS: In May you pointed out some cases of Roma children whom directors of some elementary schools refuse to admit for, what you have called "not entirely objective reasons". Do you think that the discrimination of Roma children at schools is a widespread phenomenon?

KO: Yes, there are such cases. We have recently been dealing with one case from the Prešov region. We have filed a complaint. Sometimes, the directors say that the schools are already full or that the children have not passed the psychological tests. Of course they do not say that it is because they do not want to have a high concentration of Roma children there.

The Roma community is often not aware of these discriminatory practices and in many localities they take it as something natural, especially in Eastern Slovakia. They rarely protest such proceedings, or only do so when NGO people involved in work with the Roma community tell them that it should not happen.

A campaign that would define forms of discrimination for the Roma and also the majority would be helpful. We are planning a campaign on the discrimination against the Roma in the workforce. We want to widely involve the media in the process.

TSS: How effective has the government been in its policies to integrate the Roma communities?

KO: The last version of the cabinet's strategy to integrate the Roma community, which was passed in 2003, is built on the philosophy of temporary balancing strategies. They define the steps that certain departments should take to balance the situation of different groups within the Roma community. These balancing strategies would help the Roma to climb to a level where they have equal opportunity.

However, even though the document has been passed, the Labour Ministry has, in fact, been rejecting the principle of temporary balancing measures, claiming that it [the ministry] bases its operation on the civil principle and does not differentiate between needy people based on their ethnicity.

The ministry does not see a reason to do things specifically for the Roma even though the situation concerns 80 percent of the Roma. The civil principle is fine, but then nobody should say that the Roma are abusing the social system or that they do not want to work.

The Health Ministry also said that it does not see any need for starting any special programmes for improving the health condition of the Roma. However, I think that recent events such as the outbreak of epidemics has shown that there is, in fact, such a need.

TSS: There is a wide consensus that it is important to create jobs for the Roma. Is there any progress in this area?

KO: After the reform of the social system when the social benefits were severely cut, a very serious situation emerged [massive shop lootings in eastern Slovakia], which demonstrated that the people were not prepared for such reform.

I do not think that measures taken after the crisis have considerably improved the situation. As far as the creation of stable jobs is concerned, I do not think we have made any considerable progress.

What is important is that the regional labour offices have staff who are able to work with a specific group of people, those who have been long unemployed, and it is difficult to place them back in the workforce. If we fail to give jobs to these people, they will continue being dependent on social aid. I am not sure whether the Labour Ministry is taking this into consideration when planning its new labour offices.

TSS: Another priority is to improve the housing conditions of the Roma by substituting their cottages with a more human form of housing, but this, however, appears to be a long and financially demanding process.

KO: We have proposed the allocation of Sk200 million (€5 million) from the state budget for these housing projects that would flow from the budget of the Ministry of Construction and Regional Development. However, the budget has not been adopted yet. It is not much, but it is at least something.

TSS: You also proposed an increase in the number of fieldworkers to cover additional problematic Roma localities. Do we have enough trained professionals to perform these tasks?

KO: The social fieldwork was included in the cabinet's programme and we have coordinated the operation of 20 fieldworkers in different localities.

We put some pressure on the Labour Ministry to increase the number of fieldworkers and the ministry did take the initiative to involve more people. This year the number should climb to between 70 and 80. We would like to have 400 fieldworkers out there among the Roma.

However, I am concerned that the Labour Ministry will, in their effort to push for the civil principle, disagree with the current definition of fieldwork in the Roma settlements and want to use these people for other marginalised groups, such as drug addicts for example.

If out of the 400 fieldworkers, let's say 250 are oriented to work with drug addicts, then the situation would be very difficult. If these people are not specially trained or are in the form of administrative support, then we will just miss the target.

TSS: It has often been stressed that the majority population should first change its perception of the Roma. What are the chances for overcoming the barriers and prejudices separating the majority of society from the Roma?

KO: If I look at the past 10 - 12 years, I think a lot has been done regarding the issue of the perception of the Roma. Even issues that had never been discussed before are out there now and people talk about them. On one hand, people have realised that there is an urgent problem and the government has also started dealing with the situation.

However, we have to admit that much of this has been accomplished only due to pressure from international institutions and because Slovakia has had to climb to a certain standard. The EU even warned us during the pre-entry process that declarations are one thing and the practical implementation is another, and that Slovakia had a problem with the latter, which is often linked to financial limitations.

There has been considerable progress in public opinion on regional level thanks to the operation of NGOs and various foundations. There are numerous projects of different nature sthat do not often capture the media's attention. Certainly, we could have done more in communicating with the media, as have Hungary and the Czech republic, for example. I personally am trying to communicate with the media more intensively.

TSS: In the past, the Roma political parties were mostly characterised by arguments over positions rather than a real representation of the interest of the Roma. What do you think is preventing the rise of a real political force that represents the Roma community?

KO: Unfortunately, this is the situation. Compared to other countries, like Hungary and the Czech Republic, the situation is much worse.

One of the reasons is that the same people who emerged in 1989-90 are still there. They have been trying to survive with their old ways and do not want to see that it is not enough to simply hold meetings, summon a congress, create programmes or organise press conferences.

They fail to see that they have to build membership from the bottom and that it is hard work, not only declarations. The Roma parties have mostly functioned by reacting to statements of others and protesting them, but rarely by making a contribution in a general debate or taking a stand over important political issues.

They themselves have pushed their parties into outsider positions. They have also closed doors for the next generation, which would be fully qualified and trained to function in politics. Instead they have mostly started working for non-governmental organisations.