THE HIGH Tatra Mountains offer a wide range of facilities - from simple pubs to luxurious hotels - where tourists can pleasantly spend their time when the weather turns foul. Each tries to offer something unique.
This is certainly the case for the Zbojnícka koliba in Tatranská Lomnica. An unordinary view welcomes those who enter this cosy restaurant; the walls in one of its corners are covered with a large number of ties that the local "outlaws" have cut off their guest's necks with a huge kitchen knife. 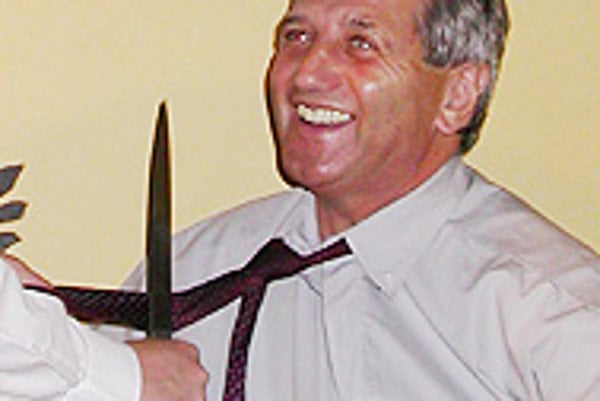 Font size:A-|A+0
THE HIGH Tatra Mountains offer a wide range of facilities - from simple pubs to luxurious hotels - where tourists can pleasantly spend their time when the weather turns foul. Each tries to offer something unique.

This is certainly the case for the Zbojnícka koliba in Tatranská Lomnica. An unordinary view welcomes those who enter this cosy restaurant; the walls in one of its corners are covered with a large number of ties that the local "outlaws" have cut off their guest's necks with a huge kitchen knife. It is an old custom that has been kept alive for over 30 years.

It all started in 1967 when the koliba was built. In the nearby Grandhotel Praha, Anton Geleta was learning to become a waiter. A showman with a short figure and big belly who was forever treading on his apron, Geleta knew how to make people laugh. At the time the koliba was launched, he was just celebrating his birthday and received the position of operating manager as a present.

In order to do the restaurant's name justice (Zbojnícka koliba translates as the Outlaw's Shed), he taught the staff to steal. The current owner of the restaurant, Štefan Kertes, explained how: "Back then, each guest who wore a tie lost it. When the entertainment heated up - the men had had several drinks - the 'outlaws' came. The ties were their loot, and to give [the show] a really horrifying taste, they used a large kitchen knife to cut them off."

That is how they managed to collect the ties of Fidel Castro and Vasil Biľak. The walls bear ties once belonging to various domestic and world-famous politicians, businessmen, sportsmen, actors, artists, and "ordinary" visitors. Several ladies who have lost their headscarves or bra straps here have assured a female presence.

Many of those robbed have been proud to give up a part of their outfits and even included their business cards so that their ties did not hang on the wall in anonymity. At the moment, there are some 1,800 ties in Zbojnícka koliba, Kertes said. However, it is hard to state the exact number of the stolen bits of clothing as the passage of time wears on them and some have to be thrown away.

Nowadays, getting a trophy is not as easy for the Tatra outlaws as it once was. Slowly it has turned into an adrenaline sport.

"It's problematic these days; not everyone accepts such a joke. Some people feel offended, some mocked in front of a lady, others have an expensive tie, or somehow prise it so much that they are not willing to let it go. By and large, we have to evaluate the situation and guess what we can do in order not to offend anyone. We have to make the guests to feel good here and as an exchange they might give us their tie voluntarily," Kertes said.

No robbery is without compensation. The "victims" receive the local specialty, Outlaw Tea, served in a special way. Following the outlaw style, a waiter scares you by symbolically firing a pistol and then serves you a burning drink - the strong, proper tea of the Tatra outlaw.

Apart from the drink, one can try various other Slovak specialities in the restaurant, including freshly grilled meat. Original, dynamic folk music feeds the soul.

The number of ties decorating the koliba walls proves the popularity of the restaurant among its guests. The business cards show the variety of its clientele, who come from all around the world. "Our motto is - whoever's tie hangs here must come from time to time to check on it," the owner said.

Those who know the local custom are cautious. When repeatedly visiting their favourite place they either wear an old tie, or come dressed without one.

Michaela Brezinová is a journalist with the Tatranský Korzár daily.