ALMOST every third house in the tiny village of Habovka under the West Tatras has a tractor. Inhabitants make most of them themselves. The smaller ones are made with a motorbike engine, while the larger ones are converted, for example, from old Škoda cars.
The locals use the tractors almost daily to work the fields and forest. They help sow grain, dig potatoes, and carry wood, crops, and various other materials. Basically, the tractors do the work once done by a horse or cow.
"To take care of a horse year-round is not a cheap business. 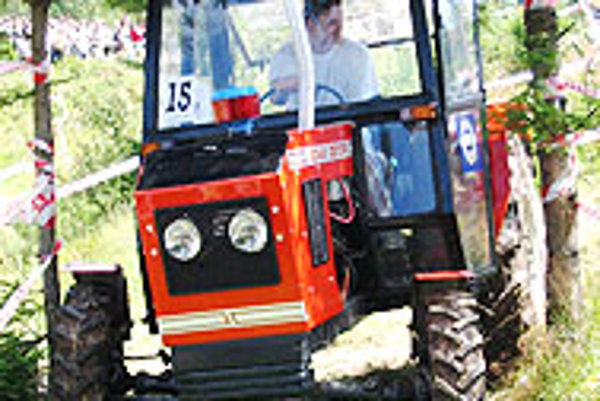 Font size:A-|A+  Comments disabled
ALMOST every third house in the tiny village of Habovka under the West Tatras has a tractor. Inhabitants make most of them themselves. The smaller ones are made with a motorbike engine, while the larger ones are converted, for example, from old Škoda cars.

The locals use the tractors almost daily to work the fields and forest. They help sow grain, dig potatoes, and carry wood, crops, and various other materials. Basically, the tractors do the work once done by a horse or cow.

"To take care of a horse year-round is not a cheap business. A tractor can be made for minimal costs out of engines and various components from old cars since there are many engineers and auto mechanics [in our village]. In the end, taking care of a tractor is much cheaper than breeding a horse," said Peter Leginus, a Habovka resident.

The individual approach taken to make each vehicle unique led the locals to start a contest for these tractors, O habovský kardan. On July 25, the amateur mechanics of the region and those from surrounding countries will meet to measure the muscle of their machines for the fifth year.

"The idea originated in 2000 in the mind of the local carpenter Peter Bebej," said Leginus, who also is one of the competition's organisers. "He was inspired by the many small custom tractors cruising the municipality. Some of them are exceptional pieces and can compete with those made in factories."

The competition enjoys a greater popularity among participants and audiences every year. In its first year it saw seven competitors, annually growing by seven or more enthusiasts. This year, the organisers await up to 40 tractor competitors and dozens of guests, including those from Poland and the Czech Republic. Some accommodations are booked half a year in advance for the event.

The fifth year of the competition will see racing in eight categories; the number, though, might change depending on time restrictions. A mud race, pulling competition, and a timed flat tire repair will challenge the tractor drivers. The strongest will compete for the Strongest Tractor award in a tug of war. According to Leginus, to watch the two tractors struggle to out-pull each other is a "real delicacy" for the eyes.

"The previous years have taught us to focus more on the skills and abilities of the competitor and his tractor than the speed," he said, explaining that competitors complained that the tractor was constructed for other purposes than racing.

The participating tractors vary in size, manufacture style, and design. They are divided into categories according to the size of their engines. They can be around 250 cubic centimetres, the size of a motorbike engine, or over 1,100, the size of a car engine.

"Last year, one of the participants came with a large tractor, I think the size of its engine was around 3,000 cubic centimetres. It was so perfectly made that the experts of a nearby factory producing forest tractors were astonished by the precise work on it," Leginus said.

According to Peter Šimál, executive officer of LKT Trstená, which produces forest and agriculture tractors and supports the event: "Some of the tractors at the competition are made with a very high level of quality. There were two such tractors last year that were unparalleled in quality with the others."

He continued that, while some homemade tractors are exact copies of professional ones, others are of a lower technical quality but "made to fulfil the purpose they were designed for". He also said that people at the factory take inspiration from these homemade machines or elements used in them.

"It's worth contemplating each piece. We are happy that there are such smart brains in Slovakia," Šimál said.

At the end of the competition, the several-member jury will announce the Most Beautiful Homemade Tractor. They evaluate the professional quality and uniqueness of the design, the precision and detail of the work, and how smoothly it runs.

Apart from the competitions, tractor manufacturers can exchange or buy accessories and additional components for their vehicles. Visitors, meanwhile, can compare the homemade tractors with factory-produced pieces.

According to Leginus, the contest is one of the highlights that attract tourists to the region. Despite its technical title, O habovský kardan (For Habovka's Transmission Shaft), it has a light, humorous spirit. The organisers and competitors agree that "to entertain the viewers matters more than winning the competition".

O habovský kardan opens the evening before the July 25 competition with a Kardan Disco party lasting until the very morning. The competition starts at 12:00 the next day. Stands with refreshment accompany the event and there is a campsite. Habovka is situated near Dolný Kubín in the Orava region, 10 kilometres east of Podbiel in the direction to Zuberec. For more information visit www.habovka.sk.