IT'S A HARD life, that of a superhero. Sure, they have incredible strength and heightened senses. They bask in the glory of saving the world and rescue beautiful damsels in distress. But superheroes have alter egos - normal people with normal lives. And normal life is complicated. Just ask Peter Parker. 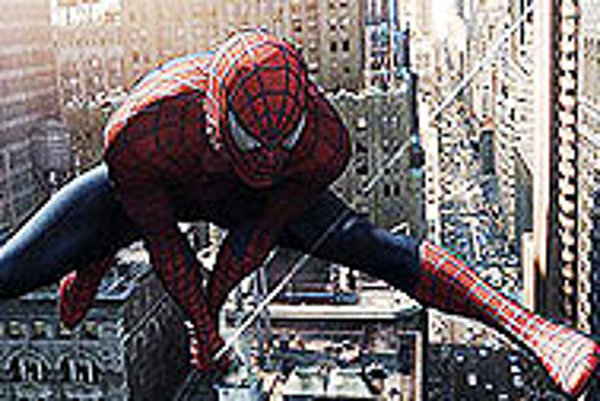 IT'S A HARD life, that of a superhero. Sure, they have incredible strength and heightened senses. They bask in the glory of saving the world and rescue beautiful damsels in distress. But superheroes have alter egos - normal people with normal lives. And normal life is complicated. Just ask Peter Parker.

See, Peter is Spider-Man. But he's also a typical kid, awkward and nerdy. This made Tobey Maguire such an inspired, if initially surprising, choice for the title role in 2002's Spider-Man. Though handsome, he's not big, brawny, and confident in the way one expects a superhero to be. In fact, he's rather awkward and nerdy.

The first film was all about a helpless, introverted teenager who suddenly gains superpowers that enable him to control his own life and radically influence the lives of those around him. But with great power comes great responsibility. And ordinary life brings so many other things to worry about.

Peter has college classes to pass, pizzas to deliver, and photographs to take for the Daily Bugle newspaper. His landlord constantly pesters him to pay his rent. He worries about his widowed aunt, who struggles to pay her bills. His best friend wants to kill Spider-Man, not realising the masked hero's true identity. To further complicate matters, Peter's hopelessly in love.

It's all enough to give a boy anxiety. And this is what Spider-Man 2 is all about. At first, the duties associated with being Spider-Man make it difficult for Peter Parker, regular college student, to function. He's in danger of failing school, he gets fired from his job for constantly being late, and he continually disappoints the woman he loves, Mary Jane Watson (Kirsten Dunst), with his unreliability.

As his personal life deteriorates, so too do his powers. Spider-Man can no longer perform physically. Suddenly, he's unable to shoot his web. Thrust though he might, nothing happens. As Peter struggles with his shortcomings, Mary Jane prepares to marry an astronaut. With nothing going right, Peter doubts if he's really cut out to be Spider-Man.

But with another mad scientist on the loose, ceasing to be Spider-Man is not so easy. Doctor Octopus (Alfred Molina), the result of an experiment gone horribly wrong, threatens the city and, in particular, Peter's loved ones. The frustrated superhero must regain his focus and figure out what he wants and what he must do.

Once again, the film has elaborate computer-generated action sequences. But, essentially a love story that revolves around a young man's self-doubt, it's far more melancholy and subdued than the first.

Though definitely making a popcorn movie for mass consumption, the director, Sam Raimi, retains the absurd humour and visual flair that have made him a cult favourite since his early days making low-budget horror films. He compensates for some of the film's shortfalls: It's often far too predictable and unsure in tone.

But Maguire and Dunst are what really make the film work. Maguire is earnest and goofy while Dunst is smart, charming, and sexy. Their undeniable appeal and natural rapport make us genuinely care about them and their trials. Now, if only the trials of ordinary life actually seemed so much fun.