THE HIGH Tatras are Slovakia's most popular tourist destination. More than 2.5 million people visit this national park each year. With 25 alpine peaks reaching heights of 2,500 meters, it is easy to see why travellers enjoy this natural haven. However, the reasons do not stop here.
Much of the park's hiking terrain is served by ski lifts, making it easily accessible to hikers of all ability levels. 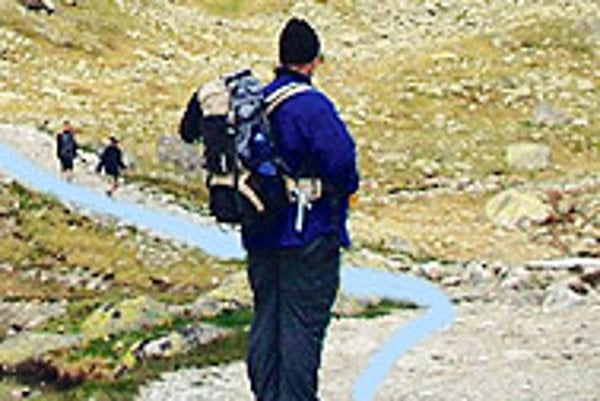 THE HIGH Tatras are Slovakia's most popular tourist destination. More than 2.5 million people visit this national park each year. With 25 alpine peaks reaching heights of 2,500 meters, it is easy to see why travellers enjoy this natural haven. However, the reasons do not stop here.

Much of the park's hiking terrain is served by ski lifts, making it easily accessible to hikers of all ability levels. The lifts provide visitors with an opportunity to experience the beauty of the park without arduous ascents and descents. Warm meals, bathrooms, and shelter from storms can also be found in the area's abundant mountain huts. As outdoor writer Bill Bryson once remarked, "the Rockies have their charms but I love hiking in Europe the most because of all the amenities".

This article will explore two alpine hikes: one to Predné Solisko (2,093 metres), and one to Kôprovský štít (2,346 metres). The first hike is not very demanding, thanks to a chairlift. The second one requires a higher degree of physical fitness, but the beautiful vistas from the peak are worth the effort. Together, these two walks will take you to the two largest alpine lakes in the Slovak part of Tatras - Štrbské pleso and Veľké Hincovo pleso.

The high-mountain trails in the High Tatras are opened from mid-June until the end of October. They close for the rest of the year to protect the area's sensitive flora and fauna.

There are three major base villages in the High Tatras: Starý Smokovec (1,000 metres), a central hub with old world style hotels and a spa town flavour; Štrbské Pleso (1,350 metres), a popular ski centre with a charming lake; and Tatranská Lomnica (850 metres), a quieter destination with an excellent cable car connection to Lomnický štít (2,632 metres). All of these towns are connected to each other and the city of Poprad by an efficient electric tram, making a car unnecessary.

I went for a short hike above the village of Štrbské Pleso on my first day. I grabbed a local cheese delicacy known as an oravský korbáčik (Orava Whip) at a stand and then took a quad chairlift (Sk130 or €3.25) up to Solisko (1,830 metres), the location of one of the park's many mountain huts. This chairlift runs daily during the summer from 8:30 to 16:30.

I hiked above the tree line along rocky terrain for an hour until I reached the top of Predné Solisko. The views from this peak are magnificent - one can see the nearby Mlynická and Furkotská valleys with the Low Tatras on the other side, and also the famous national peak of Slovakia, Kriváň (2,494 metres).

Since dark clouds were closing in quickly, I made a quick descent back to Štrbské Pleso. The hike down took 1.5 hours, and a light rain caught up with me at the very end. Weather can change quickly in this high alpine environment, so visitors should always take precautions. It is recommended that hikers carry a lightweight summer Gore-Tex mountain shell and wear light-duty hiking boots. For safety's sake, hikers should also register their destination, and expected return time with their hotel.

After a nice dinner of dumplings with sauerkraut and pork ribs (kapustové strapačky s bravčovým rebierkom) at the Slovenská Koliba restaurant in the hotel Toliar, I took a walk around the lake and witnessed an extraordinary natural phenomenon. Simultaneously, the sun peaked out from behind the clouds, and the temperature fell by 5 degrees Celsius. Fog started rising from the lake, and rays of light from the sunset grazed the mountain peaks.

At 6:00 the following day there was not a soul to be found at the trail sign pointing toward my next destination - Veľké Hincovo pleso (Great Hincovo Lake). For the first hour, the trail took me through a spruce forest to Popradské pleso. From there, I continued up Mengusovská dolina valley. The path crosses the Hincov potok stream several times. During this trip, the stream was flooded in places due to heavy rains; therefore, I recommend waterproof hiking boots for this trail. Because we encountered snow and ice at higher elevations, collapsible aluminium hiking poles (with snow baskets attached) are also useful, but crampons and ice axes are unnecessary.

There are two steep ascents from Popradské pleso that pass through rocky terrain to the valley of Hincové plesá lakes. I reached the Veľké Hincovo pleso, which was still covered with ice, after 1.5 hours. This 20-hectare body of water is the fourth largest alpine lake in the High Tatras range (including the Polish side). The Mengusovské štíty peaks and Kôprovský štít surround the lake on three sides.

From the trail crossing marker, I continued up steep switchbacks to Vyšné Kôprovské sedlo (Upper Koprovské Gap - 2,180 metres). As I was climbing, I suddenly heard a loud whistle. Thinking it might be a hiker in distress, I began looking around carefully. Then I spotted the whistler. About 20 meters from me stood a furry rodent a little bigger than a housecat - a marmot. He stared at me intently for a half a minute and then scurried back to his den.

Marmots, together with chamois, are two of the unique and rare mammals that can be found in the Tatras. The only American holiday named after an animal, Groundhog Day, is named after one of the fourteen species of marmot that inhabit the planet.

At Vyšné Kôprovské sedlo, the trail forks. One path continues to Hnilská dolina valley, and the one I took heads up to Kôprovský štít. The last hour of the hike was directly uphill. To make matters worse, in front of me lay a huge snowfield. It was tough going: two steps forward, then one sliding step back. After falling several times, I finally crossed the field and began scrambling over rocks and boulders to the top of the mountain.

Although the entire hike was stunning, the view from the top of Kôprovský štít trumped all others. Soaring granite peaks and ridges encircled me. They included Rysy, Vysoká, and Svinica. When I looked back down toward Hincovo pleso, I had to grab onto a boulder to stave off acrophobia.

On the descent down, I stopped for some cabbage soup in the hut at the Popradské pleso. The prices at this restaurant were reasonable but as a general rule, huts at higher elevations charge more than ones further down towards the villages.

After an eight-hour high alpine hike, I returned to Štrbské Pleso. To quote my friend and fellow hiker Slavo, "I have visited the Tatras several times, but we always went only half way up. From down below, it never looked like the climb was worth the effort. But now I know that I was mistaken."

As one ascends these mountains, the crowds disappear and the magic of the place enshrouds you. In a land of mountains, the High Tatras eclipse all others. No visit to Slovakia is complete without a trip there.

Transportation: From Bratislava to Poprad - Intercity train - Sk420 (€10.5) - four hours. Reservation needed; in the summer it is recommended to make it a few days in advance.