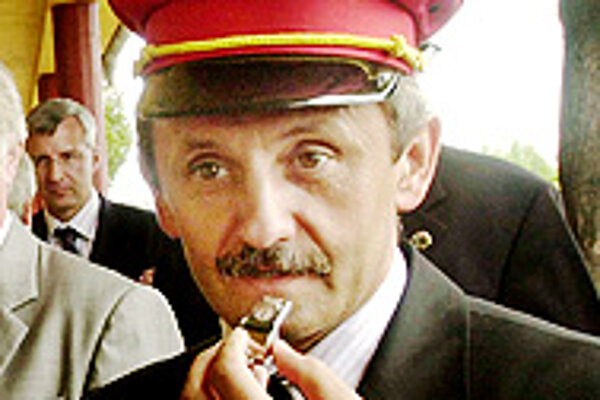 In July the Slovak government approved a plan to split the national railway company Železničná spoločnosť (ŽSSK) into two joint-stock companies: one operating solely passenger transport and the other cargo transport.

It remains unclear how big a stake of the cargo transport company will be sold, but Transport Minister Pavol Prokopovič thinks the entire 100 percent should go.

The division should be completed by the end of 2004 or the end of March 2005 at the latest.

ŽSSK hopes to use the privatisation proceeds to reduce its debts and obligations.

According to Prokopovič, the ministry expects to see at least Sk15 billion in its pocket from the deal.

"On June 30, 2004 the debt of ŽSSK amounted to approximately Sk8 billion (€200 million). One of the aims of the cargo and passenger transport separation is to clarify where and how the debt, which represents a burden for the taxpayers in the end, is being created," Vladimír Drozda the head of the Transport Ministry's service office told The Slovak Spectator.

Prokopovič told the SME daily that the ministry had decided to separate passenger and cargo transport companies because their business activities were of a different character.

Cargo transport, he said, is profitable and the unprofitable transport of passengers, which is a public service, has been carried by it for a long time.

"However, this kind of subsidisation is not allowed by European law," added Prokopovič.

According to Finance Minister Ivan Mikloš, if ŽSSK remained one company, the support would result in the loss of cargo transport competitiveness.

Robert Nemcsics, a former economy minister and currently an independent parliamentary deputy, said he was surprised the information was presented in such a blunt way. He expected a discussion over the issue first.

"On the basis of the information published so far, I am not inclined to such a privatisation. Cargo transport is the more profitable part of the railway operation. I do not understand the main motive in this case," he said.

Prokopovič said the privatisation of the cargo company should be launched as soon as possible.

The minister cannot see any reason all the shares could not be sold.

The ministry will make a final decision on the volume of the stake to be sold only after it consults with a privatisation advisor, which will be chosen in an international competition.

"The announcement of a shortlist competition for the advisor in the cargo transport privatisation was sent to the official journal of the European Union and also to the Slovak journal of public procurement on July 12," Drozda told The Slovak Spectator.

He added that speaking concretely of possible buyers of the cargo transport company was premature.

"An advisor who would suggest the most appropriate way to privatisation will first be chosen and then an international tender for the selection of the most suitable investor will be organised," explained Drozda.

The cargo branch of ŽSSK posted revenues amounting to Sk15.7 billion (€393 million) for the transport of 50.5 million tons of goods last year, the daily SME wrote.

According to the Commercial Register, the share capital of all of ŽSSK is Sk26.8 billion (€671 million).

In the Top Trend chart of the Trend economy weekly, ŽSSK is a seventh biggest non-financial company in Slovakia and, by employing more than 19,000 employees, the second biggest Slovak employer. ŽSSK was established two years ago, when Železnice SR was separated into two companies. The railways of hte Slovak Republic operates tracks, railway stations and ŽSSK trains.

Jozef Schmidt, the head of the railway trade unions, sees certain risks in the privatisation.

The material on the ŽSSK transformation also hints that, after the privatisation, there will be a drop in the number of employees in both firms.

"At present it is not known how the process of the ŽSSK transformation and the consequent privatisation of the cargo company will influence the number of employees. However, we expect that the approach of a new investor will be standard and they will strive for higher effectiveness. This will probably result in higher security and higher incomes for the employees working in cargo transport," Drozda told The Slovak Spectator.