CORPORATE social responsibility is only at the beginning of its path in Slovakia. Large companies with foreign capital usually have included this strategy in their corporate policy, but the Slovak business sector and the general public are still looking for ways to support society.
Companies already involved in assistance programmes and the non-governmental sector as a whole declare that it should be natural for businesses to participate in some form of charity. 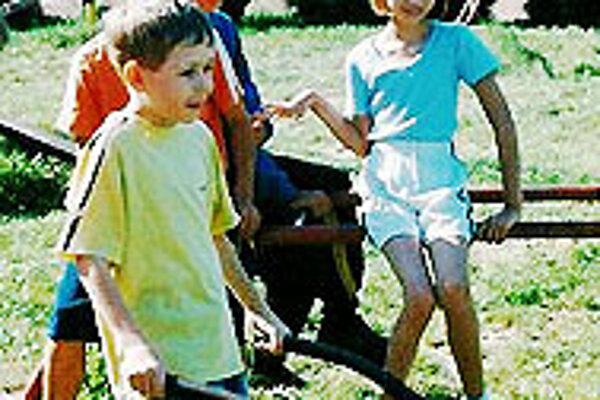 Font size:A-|A+  Comments disabled
CORPORATE social responsibility is only at the beginning of its path in Slovakia. Large companies with foreign capital usually have included this strategy in their corporate policy, but the Slovak business sector and the general public are still looking for ways to support society.

Companies already involved in assistance programmes and the non-governmental sector as a whole declare that it should be natural for businesses to participate in some form of charity. According to brief interviews by The Slovak Spectator with six companies involved in this field, corporations should feel responsible for the development of the community in which they operate.

Many of them consider such activities a part of their identity and one of the strengths of their company. Some of them choose fields for their support that are relevant to their business activities or could be clearly connected to their product.

The donors agree that a good example by bigger companies can also encourage smaller businesses to get involved in charity. They say that the size of a company is not always an important factor in deciding whether to help or not.

"It is usually a part of a policy in large foreign companies. As for Slovak firms, I am sure there are companies that include supporting the third sector in their strategy as well. On the other hand, you cannot get ahead of the development. It takes its time," Peter Handiak, a law expert working with the non-governmental organisation First Slovak Non-profit Service Centre, told The Slovak Spectator.

He continued: "There is a long tradition of corporate responsibility abroad. The trend for firms to feel the need to help is now coming to Slovakia. Several meetings and workshops have been recently organised on corporate philanthropy. From this point of view, I am seeing the first results and I am confident it will get better."

The attitude of the Slovak public and the news media towards firms active in philanthropy is, of course, positive. However, the media, wary of the fine line between such exposure and commercial promotion, are not always willing to publicise such activities.

Corporations agree that companies should not help society simply for publicity; however, they think that the various media outlets do not always realise their role in developing and spreading social awareness and responsibility among the general public as well as would-be corporate donors.

"Personally, I agree that the Slovak public perceive support of the third sector positively. The media respect it as well and they give it some exposure. However, in our experience, I have to say that some of them virtually deny any publicity to such activity. They say it is a form of a hidden advert. However, I think that it could be a motivation for other firms if the media were more willing to cooperate," said Juraj Lackovič, the general director of Henkel.

"Slovakia is a young, emerging democracy. This goes also for CSR [corporate social responsibility] and media. However, it should be said the role of media is still underestimated - which is unfortunate given that the media can reinforce the CSR message by spreading it among the wider public," added Branislav Cehlárik, public affairs officer in Citigroup Bratislava.

Eva Güttlerová, the spokeswoman of Slovenská sporiteľňa bank, noted that there has been progress in the perception by media and the public: "There have also been conferences and workshops where the main topic was corporate social responsibility".

"In my view, philanthropy in Slovakia does not yet have the power to influence the purchasing decisions of people as it has, for example, in the USA. However, activities in the area of CSR are an important factor influencing corporate reputation, and I believe that society will soon expect and require such activities, especially from larger companies," explained Juraj Droba, the director of corporate affairs of Eurotel.

He continued: "Media have their own agenda and no one can expect that they start praising firms active in charity projects, although I wish it were the opposite case. It is similar abroad. The majority of the media would regard such information as commercial and point you in the direction of their advertising sales department".

Orange spokesman Peter Tóth added: "We do not think that most companies are active in philanthropy because they want to get free media or other forms of publicity. Of course, the role of the media is very important in making the philanthropy projects known and sometimes it can be crucial for their success... However, some media regard it as a veiled advert and they do not pay attention to it."

"We think there is a certain aversion in the media to connecting philanthropy projects with companies. On one hand, it is understandable because companies should not do that with the ambition to gain attention. On the other hand, wider publicity would, for sure, encourage more and more businesses to think about whether they should invest some money usually invested in commercials for useful and helpful projects for society," said Radoslav Bielka, the spokesman for Slovak Telecom.

Larger donors prefer working on systematic and long-term philanthropy projects. Sometimes they support people in need directly; sometimes they offer support through various organisations and foundations, as they have up-to-date information about who needs help the most.

Companies usually stress clear rules for philanthropy projects and demand feedback, so they know for whom and what purposes their money was used. They agree that, although the legal system of the third sector is still not ideal and lacks transparency, a company that wants to help will find a way to do it.