HEAVY floods hit eastern Slovakia over the past two weeks. Crops waiting for harvest have been damaged, hundreds of houses were flooded and many people were forced to vacate their homes. This is the seventh year in a row that the country has suffered such devastating floods.
Although the government adopted a flood prevention programme in 2000, officials have curtailed its implementation over the past few years, and environmentalists add that the programme, if ever completed, will not be sufficient anyhow. 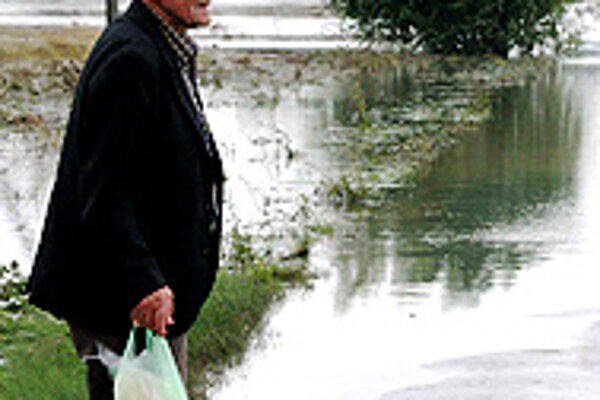 Font size:A-|A+0
HEAVY floods hit eastern Slovakia over the past two weeks. Crops waiting for harvest have been damaged, hundreds of houses were flooded and many people were forced to vacate their homes. This is the seventh year in a row that the country has suffered such devastating floods.

Although the government adopted a flood prevention programme in 2000, officials have curtailed its implementation over the past few years, and environmentalists add that the programme, if ever completed, will not be sufficient anyhow.

Strong storms and heavy rainfall during the last days of July turned smaller eastern Slovak rivers such as the Hornád, Torysa, Latorica, and the Bodrog into wild rapids that burst their banks. The Ondava river even tore through a dyke.

The Košice and Prešov regions were under a state of flood emergency and announced the highest degree of flood alert.

The floods struck around 200 villages. Although the endangered inhabitants were evacuated, one man was found drowned and one boy is still missing. The situation is now stabilising.

The overall damages have not yet been assessed.

"It is too early to give numbers," Peter Stanko, the secretary of the Slovak Environment ministry told the press. The exact numbers will be revealed in three weeks time.

The Slovak Chamber of Agriculture and Food in eastern Slovakia however, estimates that the direct damage done to the crops, which were particularly abundant before the floods, could exceed Sk50 million (€1.3 million).

The Slovak cabinet will pay direct flood damages from the government reserves in the state budget.

"We expect objective estimates of the damages by the Environment Ministry and Interior Ministry. According to their figures, the Finance Ministry will release funds for the flood damages," Peter Papanek, the spokesman of the finance minister told The Slovak Spectator.

Additionally, Labour Minister Ľudovít Kaník suggested that the mayors of the affected villages could put their unemployed to work in helping clean up the aftermath, for which the ministry offered its finances.

Floods have occurred in Slovakia each year since 1998, with eastern Slovakia being hit almost every year. Though the floods have not been as bad as in some neighbouring countries, like the Czech Republic, the damages still reached into billions of crowns.

The first flood in 1998 was without a doubt the most tragic yet. It hit the Prešov and Košice regions the same as it did this year, but in 1998, 50 people died in a Roma village near Jarovnice. Damages then totalled about Sk1 billion (€25.5 million).

Four years ago, in light of recent history, the government approved a programme of protection against floods that is effective until 2010. Anti-flood projects consist of the regulation of river flow, widening of riverbeds, the construction of dykes and dams, and the implementation of emergency procedures.

However, the programme has so far only been implemented to a very limited extent.

Stanko admitted that there is a deficit in the finances for the programme and that so far, the realised projects were financed mostly by European Union funds.

The risk of flooding could be reduced if the government fulfils the anti-flood programme it adopted, reads a statement of the Environment ministry quoted by the Pravda daily. The deadline however, to completely fulfill the parameters of the programme by 2010, is out of reach.

In the past four years, only around Sk2 billion (€50.1 million) was invested in the anti-flood measures, while in actuality the project requires Sk21 billion (€526 million). In addition, state funding of the programme has been decreasing from year to year..

This year, the Environment ministry and water management institutions have Sk305 million (€7.6 million) to spend on the anti-flood measures.

The development bank of the Council of Europe will provide most of the amount - about Sk122 million (€3.1 million). Sk50 million (€1.3 million) will come from Swiss humanitarian aid and Sk101 million (€2.5 million) will be paid by the state.

The most expensive measures are protective dams, retention reservoirs and polders. Out of the Sk18.5 billion (€463 million) that the Slovak Water Management Company requires for these efforts, only Sk2 billion (€50.1 million) has been allocated, the bulk of which was swallowed by the costs of the flood damage caused in the late 1990s.

Environmentalists however do not agree with the current state policy of protecting against the floods. They say that the government is focused on large and money-consuming projects that do not respect the real environmental situation.

According to them, the construction of dykes and dams, and the regulation of riverbeds would only cause further drainage and channeling of the water into the countryside, which is how seasonal heavy rainfalls cause floods in the first place.

"Activities such as deforestation, agriculture, urbanisation and water management have caused a drying of the country. Longer seasons of heavy droughts and then seasons of heavy rainfalls are the result. This was our forecasts a long time ago and now we see it coming true which makes me sad," Michal Kravčík, a hydrologist from the environmental organisation People and Water told The Slovak Spectator.

"In the situation of a flood we do not need drainage measures. We need a means to help the ground absorb the water. It means forestation, building terraces, lakes, ponds, bogs, etc.," he added.

According to Kravčík, these measures will gradually immerse the water and slow down the water flow. It would quell the periodic heavy rainfalls and extreme weather, and as a secondary positive impact, it would bring about a richer biodiversity.

"What is more, we could create about 13,500 jobs in these projects, especially in eastern Slovakia where the unemployment rate is the highest," he added. He estimates the projects would cost around Sk11 billion (€276 million).

Kravčík suggests using money from the EU Cohesion fund, the World Bank, and the Norwegian government, which, although not an EU member, intends to support new EU countries, with a preference for environmental projects. It could also be partially funded by the state budget, seeing as the project would provide not only environmental but positive social impacts as well.

The authority of water management should be mainly in the hands of the municipalities, so that they can plan such projects and ask European or other institutions for financing, Kravčík said. Although municipalities are interested in such projects, they are not allowed to be active in them because water management is under the control of the state and the Slovak Water Management Company.

He thinks that the large technical solutions proposed by the government only send the excessive waters and flood waves quicker to the lower levels of the river and that it does not solve the root cause of flooding which is the changed climate and the drying out of the country. Thus, this type of water regulation can help one municipality and simultaneously hurt another.

Juraj Vlk, from the forest protection environmental club Vlk (Wolf), also thinks that this year the floods show that the ability of the country to absorb extreme rains is limited. The reason is improper forest management.

"Extreme rains were not an exception even in the past. Their consequences were much smaller... Most of the flood water is retained in healthy forests and small creeks. This allows it to be dispersed throughout the country more slowly and evenly," he told the daily SME.

"No river, even with perfect polders and dams can absorb water rained on a large area," added Vlk, and compared the situation of villages that lay near preserved forests, where damages were minimal, with other villages that were heavily affected by the flood.

It may be one of only a few tools that villages and municipalities can use to protect themselves against floods. Today, even insurance companies refuse to insure areas where floods occur.

"If an area floods regularly, then it is not an accidental event. Because the principle of insurance risk is not maintained, we cannot insure such a risk," Lucia Muthová, the spokeswoman of Allianz - Slovenská poisťovňa told The Slovak Spectator.

Floods are becoming the latest European phenomenon. The European Commission even prepared a proposal for a European anti-flood programme in July. Its foundation lies in developing close cooperation and better information exchange among EU countries.

The goal of the initiative is to prevent the situation where floodwaters are channelled from one territory to another. The EU intends to create a map of risk zones around rivers.

Since 1998, flood damage in the EU has incurred a cost of around €25 billion, caused the deaths of almost 700 people, and forced half a million people to relocate or rebuild their homes.