THE SLOVAK capital has formed a special police unit to discipline homeless people, drunkards, and other groups that make a mess or pester pedestrians in the city's most exposed areas.
The police unit was formed at the end of July and consists of 12 officers.
It began clearing the streets of the ill-behaved groups focusing mainly on the city centre including Stará tržnica market place, Kamenné námestie square, and Kollárovo námestie square. The unit also paid visits to the main railway station area, and Poštová street. 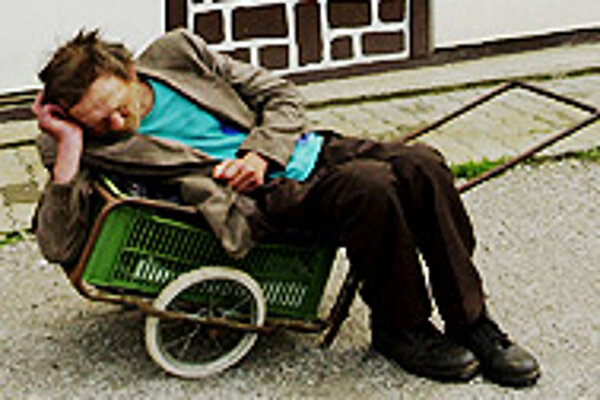 Font size:A-|A+0
THE SLOVAK capital has formed a special police unit to discipline homeless people, drunkards, and other groups that make a mess or pester pedestrians in the city's most exposed areas.

The police unit was formed at the end of July and consists of 12 officers.

Walking through the city centre it is not unusual to see groups of loud young people with mohawk hairdos dressed in dirty clothes occupying the benches in the pedestrian zone.

They can often be seen drinking alcohol, littering the area and begging for money and cigarettes from passer bys.

Another problem is the homeless people who sleep on the benches, and drug addicts, who are also a frequent sight in the centre.

In front of the railway station, it is virtually impossible to find a vacant or clean bench as the homeless people, who stay in the area the whole day and leave their trash all over, constantly occupy them.

To get rid of the mess makers, the special police team started operating on July 22, said Milan Vajda, the city hall's spokesman.

The city mayor, Andrej Ďurkovský, initiated the creation of such a police unit after talks with the city police chief Zuzana Zajacová.

"We had to take action. In recent weeks the situation has become totally unbearable," said the mayor.

According to Ďurkovský, the violators have been offensive and indecent, and even cases of torturing animals by these people have been witnessed and registered.

Although Ďurkovský said that city hall is trying to help the homeless, on the other hand the municipality is accountable to tax payers as well and therefore it has to make sure that the inhabitants and visitors of the city are able find a clean bench to sit on in the city centre.

Police chief Zajacová said that the special unit went through first aid training and that while on the streets they will also act as social workers to a certain extent.

"We want to motivate the people to try to find work. We want to let them know that there are other possibilities here," Zajacová said.

Those who behave improperly will be asked to submit their personal identification documents, and if they have no identification they will be taken to the police station or told to leave the premises. Some concerns emerged as to whether the police have the right to ban these people from public spaces.

According to estimates based on a police action that took place at the end of last year, there are around 600 homeless people in Bratislava.

Many of these people come to the capital from various parts of Slovakia.

Ďurkovský also said that some cases would be solved in such a way that "people whose permanent address is outside of Bratislava will simply be put on trains and sent home".

According to Peter Wilfling however, a lawyer from a civil rights group called Citizen and Democracy, such action would constitute a breach of human rights.

"It is not permitted to force anyone, against his or her will, or by violence, to leave a city. Such proceedings would be a breach of human rights," Wilfling told the SITA news agency.

Wilfling said that the police could only take such measures under specific circumstances when it is necessary to prevent the breach of public order.

In the first stage of the project the special unit will operate for two months after which the results will be evaluated, and the city will decide on the next steps based on the findings, said the mayor.

Ďurkovský added that he was determined to do everything possible to make sure that the capital city does not become a "container of anti-social elements from the whole of Slovakia".

"We want there to be order in this city," Ďurkovský said.

City hall is also working on a binding decree regarding the maintenance, cleanliness and public order for all districts in the city.

The mayor also said that the city wanted to discuss with some retail chains possible ways of limiting, or completely eliminating the sale of cheap wine in the city centre .