Slovakia is more than Bratislava

VISITORS arriving in Svidník (pop. 12,800) in northeast Slovakia might think they had stepped into a time warp. The original town was destroyed by heavy fighting in 1944. In the 1950s, a new town with wide streets and Soviet style buildings was built on the site of the old town. One street is called Street of the Soviet Heroes, in honour of the Soviet troops that helped liberate the town in 1944. 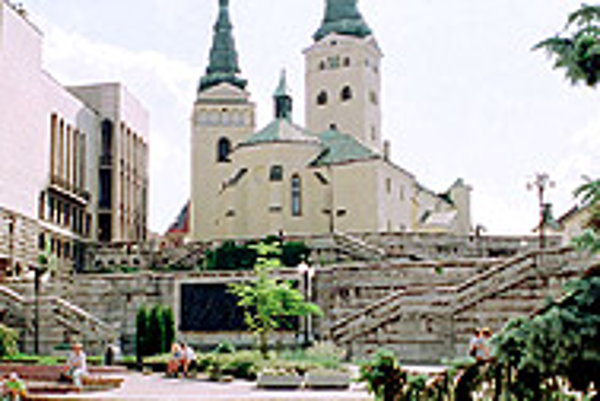 Font size:A-|A+0
VISITORS arriving in Svidník (pop. 12,800) in northeast Slovakia might think they had stepped into a time warp. The original town was destroyed by heavy fighting in 1944. In the 1950s, a new town with wide streets and Soviet style buildings was built on the site of the old town. One street is called Street of the Soviet Heroes, in honour of the Soviet troops that helped liberate the town in 1944.

Another thoroughfare is called the Street of the Czechoslovak Army, in honour of the troops that fought alongside the Soviet Army. Many towns in Slovakia used to have a street by that name. In Bratislava, it was the street now called Špitálska, which runs from downtown Tesco out toward the northeast.

Many foreign residents do not venture into the provinces of Slovakia very much. And when they do, they only go to well-developed skiing or hiking spots, or to the must-see tourist sites.

What they should also do is spend some time wandering around the towns of Slovakia. It will help them to better understand what Slovakia is all about. Just stroll through the main squares and down the side streets. Have coffee or a glass of wine in a café. Try a local menu at a traditional restaurant.

The heart of old Slovak history is rural. A century ago, only 13.7 percent of the population of what is now Slovakia lived in towns of more than 5,000 inhabitants. Only two cities at the time - Košice and Bratislava - had more than 20,000.

But the rigours of that rural life have disappeared. By the early 1960s, except for a few villages and farms, electricity was commonplace. The worst ravages of disease, such as tuberculosis, were eliminated in the 1930s, 1940s and 1950s. Four-lane roads (dare we call them freeways?) started to appear in the 1970s.

Historian Elena Mannová says it was communist industrialisation that led to the biggest city growth in Slovakia. Urbanisation wasn't the result, however. Instead she says the cities were "ruralised," because they drew in people not accustomed to city life.

Many of Slovakia's historic cities show the results of that industrialisation. The historic heart of the city has been surrounded by the pre-fab apartment buildings of communist days in a way that must make architects and city planners cringe.

Almost every one of these small cities now has a pedestrian mall at its centre. They are pleasant and comfortable, but the construction of those malls, which may have been necessary to make them attractive places, sometimes led to the razing of historically valuable buildings.

But in the towns of Slovakia, one can still stumble on pieces of the Slovak past.

In Svidník, I paid less than Sk1,000 (€25) for a two-bed room in a hotel that reminded me of communist Czechoslovakia. The showerhead seemed more interested in falling off its hook than in shooting water over my body. The hotel restaurant was only half-lit as in the old days.

Even the menu was old style. I had a three-course lunch, plus a glass of wine and coffee for Sk100 (€2.5). By Bratislava standards it was cheap. But in the depressed world of northeast Slovakia, that was a lot of money.

In the southern Slovak town of Levice I found the local newspaper chock-full of positive news about the possibility of completing the nearby nuclear power plant because it would be a much-needed boost for the local economy. In one of the town's squares I saw a candidate for the European parliament looking for hands to shake.

When I looked out the back window of my tiny hotel room in Liptovský Mikuláš situated in the country's north (it only cost Sk440 or €11), I saw a synagogue that was otherwise out of sight. When I went to investigate, I found a plaque that had been placed on the front wall of the synagogue in the early 1990s, commemorating the nearly one thousand Jews in the community who had died in the concentration camps of World War II.

The synagogue, and other ones in cities such as Trenčín (in the west) and Lučenec (in the south) are silent testimony to the 10 to 20 percent of the population of these cities that was once Jewish. What will happen to these synagogues now that there is no one left to worship in them any longer?

For years, many of Slovakia's cities were multi-ethnic places, populated not only by Slovaks and Jews, but also by Germans and Hungarians.

Some of the cities were overwhelmingly German or Hungarian.

On television recently I saw a live telecast of a festival from Kežmarok, a town sitting east of the Tatras, which was once a centre of life for Germans who had come to Slovakia seven or eight centuries ago. Slovak folk groups were dancing in the shadows of the castle walls.

In the northwest town of Bytča, near Žilina, I once stayed in a hotel that provided only woodchips for heating the room. When the visitor had used up the woodchips for the night, there was nothing to do but bundle up.

In Žilina, my first wife and I were initially denied a hotel room shortly after we were married because we had different last names in our passports. Fortunately we had a copy of our marriage certificate with us. That would not have happened in Bratislava.

In the wine-growing centre of Modra, near Bratislava, the main square is lined by a number of churches. In the graveyard of one of them, you can find the grave of Ľudovít Štúr, one of the founders of modern Slovakia. If you wander among the graves you will find the tombstones of many other Slovak Lutheran leaders of the nineteenth and twentieth centuries.

In the southern town of Nové Zámky I could hear many conversations in Hungarian, even if most of the street and store signs were in Slovak.

I have occasionally talked to Slovaks who complain about the modernisation of the towns and cities, yearning for the idealised communities that never existed.

Eighty years ago, Martin, in north central Slovakia, had a population of less than 6,000. Its streets turned muddy after it rained. Few houses had indoor plumbing.

Today the city has close to 60,000 residents and a vibrant downtown pedestrian mall. Many of the historic buildings of Martin, Slovakia's cultural centre, have been reconstructed or are being reconstructed.

It is in Slovakia's small cities that you can still experience a taste of the last century if you just let yourself wander.

Owen V. Johnson, who teaches journalism and history at Indiana University, has visited many of Slovakia's small cities in the course of three decades of research on Slovak history.