Looking for gold? Pan it out yourself

ALMOST all Slovak streams are gold bearing, or so claim competitive Slovak goldpanners. But in Slovakia you will have to look for other means of making a fortune since no goldpanner has got rich this way thus far.
Panned gold flakes, gold dust to be exact, are so tiny that it is sometimes impossible to weigh them and they are actually worthless with an estimated price of about one crown. Thus their only real value can be enjoyed in competitions and by amateur goldpanners, who keep them as souvenirs. 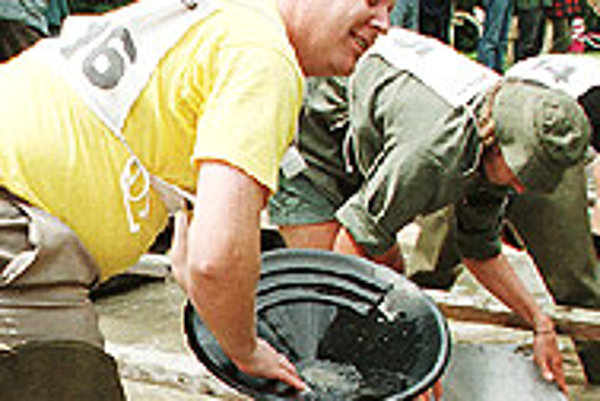 Font size:A-|A+0
ALMOST all Slovak streams are gold bearing, or so claim competitive Slovak goldpanners. But in Slovakia you will have to look for other means of making a fortune since no goldpanner has got rich this way thus far.

Panned gold flakes, gold dust to be exact, are so tiny that it is sometimes impossible to weigh them and they are actually worthless with an estimated price of about one crown. Thus their only real value can be enjoyed in competitions and by amateur goldpanners, who keep them as souvenirs. These enthusiasts with big pans consort in the Slovak Goldpanning Association, which reports up to 200 members. The number of places in Slovakia where gold can still be found is estimated at about 170.

The upcoming World Goldpanning Championship, which will take place on the bank of the gold-bearing river Hron in Revištské Podzámčie, a few kilometres north of Žarnovica between August 18 and 22, will gather the gold seekers together and recall the gold mining tradition of Slovakia. "We are expecting about 700 competitors from 25 countries and all five continents," said Richard Kaňa from the Slovak Goldpanning Association, also head of the preparatory team.

The competitors will be divided into several categories and will attempt to pan out all the gold flakes and nuggets they can find in a sachet of sand, as fast as they can. The number of gold pieces in one lot will rank from four to twelve, but it will always be the same between competitors in each category. The goldpanners will receive a penalty for lost flakes. This means that it is not necessarily the fastest goldpanner who will win.

Since it is impossible to supply the whole championship with Slovak gold flakes, the participants will pan flakes brought in from California. For visitors there will be a school for panning, where they will be able to try to pan out some pieces of gold for themselves.

Archaeological findings indicate that the first gold miners on the territory of what is currently Slovakia were Celts in the 4th-1st century BC. Evidence of the fact that gold was mined in many places across Slovakia can be seen in the names of towns, villages, and streams containing any variant of the Slovak world for gold (zlato), for example Zlatá Baňa, Zlatá Idka, and Zlatňanka.

The richest deposits of gold, silver and other precious metals were discovered in central Slovakia. Mining in this region has been a tradition for more than 3000 years. In the Middle Ages Banská Štiavnica, Kremnica, and Banská Bystrica were among the most prominent mining regions of Europe. After the richest deposits of gold and silver were used up, and excavation became ineffective, mining and other affiliated activities wound down.

But there are still companies hoping for better times. Last year, Canadian firm Tournigan Gold Corporation acquired the Slovak mining company Kremnica Gold and is planning geological surveys, whose positive results, it hopes, might lead to the reopening of the Kremnica mines.

Another Slovak town, Pezinok, whose famous mining tradition has been almost forgotten, will lure goldpanners a week before the World Goldpanning Championship in Revištské Podzámčie starts. From August 14 to 15 it will host the fifth annual street goldpanning festival and the 10th annual Low Carpathian exhibition and bourse of minerals, fossils and precious stones called the Pezinský Permoník or The Mining Gnome of Pezinok.

During this event people will not need to go into the forest to find gold, it will come to them directly at the square. For the experienced there will be a contest in goldpanning, while newcomers to goldpanning will have the opportunity to buy a sachet of sand and gold flakes for about Sk30 (€0.75) so that they can try to pan the flakes out themselves. "We have prepared some very nice Californian gold flakes for the participants," said Jiří Vitáloš, one of the organisers of Pezinský Permoník.

The decline of the mining industry and other affiliated industries does not necessarily mean an end to the golden times for Slovak mines.

Apart from competition and amateur goldpanning, tourism has also found a place in Slovak mines thanks to a group of enthusiasts who have begun organising guided tours into the All Saints, a gold-silver mine which is entered in Hodruša-Hámre, near Banská Štiavnica. It offers traces of ore mining from various periods covering a span of 700 years.

"From a historical as well as technical point of view this is the most interesting mine in this region," claims Kaňa. The goldpanning events, with their rich programmes show that the gold rush has not yet ended for Slovakia.