Not fit for a king

King Arthur
Starring: Clive Owen, Keira Knightley, Ioan Gruffudd, Stephen Dillane, Stellen Skarsgard,
Directed by: Antoine Fuqua,
Running time: 126 min
Rating: 4.5 out of 10
IT'S a tricky thing, history. Sometimes it repeats itself. Other times, it gets twisted and manipulated by those in power. And, in some cases, it intersects with mythology, making it difficult to tell where the legend ends and the truth begins. 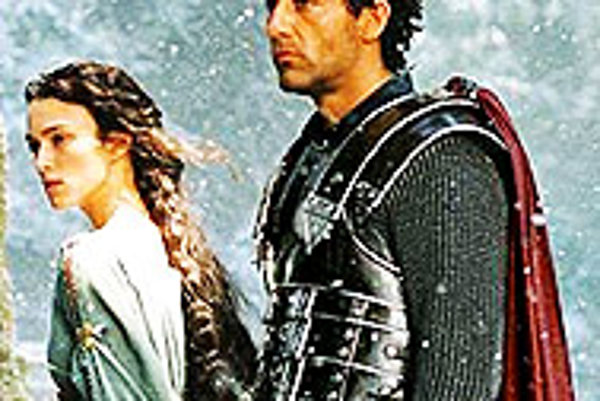 IT'S a tricky thing, history. Sometimes it repeats itself. Other times, it gets twisted and manipulated by those in power. And, in some cases, it intersects with mythology, making it difficult to tell where the legend ends and the truth begins.

Thankfully, to ensure that we all sleep well at night, history has passionate defenders like superstar Hollywood producer Jerry Bruckheimer. Recently, in movies such as Black Hawk Down and the peerlessly awful Pearl Harbor, he has turned to history as a subject. Bruckheimer's history is like the rest of his work: It goes down easy, particularly with a large tub of overpriced popcorn and an ice-cold cup of watered-down cola.

With his latest movie, King Arthur, Bruckheimer tries to give a human face to the legendary Briton and his Knights of the Round Table. The problem is, this movie's Arthur, Clive Owen, is not up to the task. In the past, Owen, especially in 1998's Croupier, has adeptly played cold, calculating characters with a detached elegance.

Here, the detachment is so overpowering that it comes across as absence. We viewers understand that Arthur is a noble, inspiring leader not because Owen convinces us, but because the script repeatedly tells us he is.

Perhaps the casting of the darkly handsome and brooding Owen was an attempt to repeat history: Bruckheimer's joyous hit from last summer, Pirates of the Caribbean, used Johnny Depp to great effect and further benefited from England's latest pouty, waif-like export, Keira Knightley.

But here Knightley fails to recapture the spunk she showed last summer. Whereas, in Pirates, her corseted heroine was witty, winning, and at least approaching healthy-looking, in King Arthur, her Guinevere is relatively dull, lifeless, and sporting a look not seen since the height of heroin chic.

Guinevere is a Woad, a sort of tribal Briton committed to battling the Saxons (to the north) and the Romans (to the south). Led by Merlin, these Woads are fierce warriors who wear little more than body paint and bits of well-placed leather. Questions of historical accuracy aside, their costumes mostly seem an excuse for Knightley to run around in a leather bikini.

But it's not as if her character is completely pointless. She reminds Arthur of his true British roots and eventually wins his heart. But their romance is far from natural. We understand that they are supposed to be together, either because we know the story, or because we are familiar with Hollywood convention, not because Knightley and Owen generate anything resembling passion.

In fact, Owen demonstrates little that could be mistaken for feeling. Arthur is fiercely dedicated to his knights and, initially, to defending Rome and Christianity. But, after learning of Rome's lies and betrayals, he directs his energy at defending his homeland, Britain, from the Saxons. But all of this comes from the dialogue, not from Owen's performance.

Few of the other players fare any better, but it's not a complete disaster. As the Saxon leader Cerdic, the great Swedish actor Stellen Skarsgard is delightfully abrasive, like a bitter old drunk disgusted by everyone and everything around him. And for good reason: In these battles, he's the only one who shows his mettle.