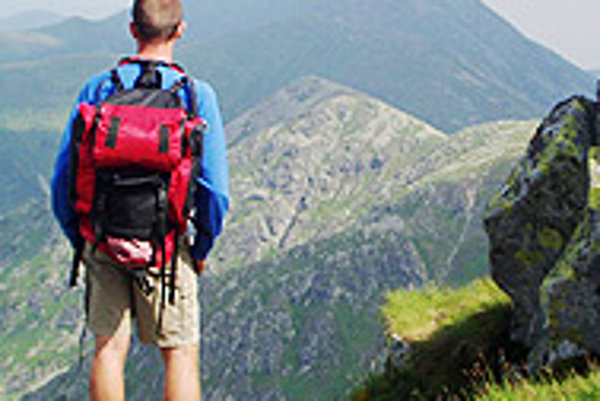 THE LOW Tatras (Nízke Tatry) receive fewer visitors than the High Tatras. In part, this is due to its name: some people assume that a mountain range with "low" in its title must be boring. But this is far from the case.

The western part of the Low Tatras contains mountains that extend well above the tree line and are genuinely alpine in character. Its 80 kilometer length also makes the range more suitable for extended backpacking trips than the shorter 25 kilometer long High Tatras. Also, accommodation is more affordable here than in the tourist-ladden High Tatras villages.

The Low Tatras begin at Donovaly and conclude at Telgárt. Our outing commences at Čertovica, a mountain gap in the east-central part of the range. We will climb to the top of Ďumbier (2,043 metres) - the highest peak of the mountain range. We will then follow the "magisterial" trail to the second highest peak - Chopok (2,024 metres). Finally, we will take the chair lift down to Demänovská dolina valley. For much of our hike we will be above the tree line, so expect first-rate views.

I arrived late on the first day so I chose a one-hour hike to Za Lenivou (gap - 1,376 metres). It was a good choice. From up there, I witnessed the sun setting through the clouds and then ducking behind Ďumbier.

That night, I stayed at Chata pod Sedlom (Hut under the Gap), where sparse but clean rooms cost Sk300 (€8) per night. Those seeking more luxurious accommodation might wish to stay at the four-star Hotel Grand or the five-star Tri Studničky in Jasná - a popular ski centre on the north side of the ridge near Liptovský Mikuláš. My co-author has high praise for the Hotel Grand: "In the summer, you get Swiss style luxury for just €60 a night for a double room."

At sunrise, our group started the ascent to Ďumbier (Ginger) along the red Cesta Hrdinov SNP (Heroes of the Slovak National Uprising trail). Spruce trees gave way to scrub pine as we gained elevation. Then we reached alpine meadows, typical for the high parts of the ridge.

After about one hour of hiking, I spotted some hikers camping in the shrub pine. Except for designated spots, camping in the national park is prohibited, and for good reason: last year, according to one of the hut owners, a bear attacked a tent containing two Czech hikers, injuring one and destroying much of their equipment. Park rangers will fine anyone camping illegally or hiking off trail. According to a recent park survey, 100 endangered chamois also live in these mountains, so one should respect their living space.

We reached the ridge after about an hour of uphill climbing, and in three hours, we arrived at Chata generála MR Štefánika (1,740 metres). Milan Rastislav Štefánik, a First World War Slovak general, who along with Tomáš Garrigue Masaryk helped create the state of Czechoslovakia in 1918, was a great adventurer who loved mountains and visited the observatory at Mont Blanc six times during the course of his life. Thus, it is fitting that this charming mountain hut, completed in 1928, was named in his honour.

As I consumed an excellent Sk45 (€1) bowl of goulash there, I struck up a conversation with two older Czech hikers. "We want to follow the whole range from Telgárt to Donovaly and then hike the Veľká Fatra range," they told me. "We were last here in 1991, the time of the first free election in Czechoslovakia, and we have fond memories of these mountains." General Štefánik, a staunch opponent of communism, would have been proud of the election of 1991, but as a pan-Slavic nationalist, he would have been saddened by the Velvet Divorce just two years later in 1993.

Not far from the hut is the Jaskyňa Mŕtvych Netopierov (The Cave of Dead Bats), an extensive system of alpine caves created by an underground river. The cave attracts spelunkers from all over the world but can only be entered with a certified caving guide.

The direct trail from Štefánik's hut to Ďumbier was closed due to erosion, so we followed the red trail to the Krupovo sedlo gap instead. From there, we took a detour trail to the top of Ďumbier. Along the trail from Ďumbier to Chopok I encountered more people. Chopok is a short hike from two chairlifts that go down to Jasná, the most developed tourist centre in the national park, and a 1.5-hour hike to the mid station chairlift on the Chopok Juh (south) side of the ridge.

Just below the Chopok summit sits the Kamenná chata (Stone Hut) - a nice place to relax and enjoy typical hiker fare, like cabbage soup, hot dogs, and fried cheese. Besides tourists from the Czech Republic and Poland, I ran into a young couple from Austria here. I wondered why people from Salzburg would travel to Slovakia to hike. "Our friend was here last winter," they said, "and he was surprised by how beautiful this place is, so we felt we needed to experience it for ourselves."

From the hut, the closest lift is at Konský grúň (Horse Mountain), a 20-minute walk downhill. On my descent down to the lift, I met an older German hiker from Dresden. "I used to come here regularly 20 years ago," she said, "and I returned this year because the chairlifts make ridge hikes easier for seniors."

I got off the chair lift in Záhradky (Little Gardens), near the restaurant and the Hotel Ski. This was the end of my journey but I strongly recommend that people spend an extra night in Jasná. My co-author enjoys the hike from the Luková chairlift station to Poľana (1,889 metres) followed by a descent from sedlo Pol'any to the Hotel Grand. One should also visit the Demänovská caves - the jaskyňa Slobody (Freedom Cave) or Ľadová jaskyňa (Ice Cave). Both caves are open daily except Mondays (between January 2 and November 15, and between December 15 and December 31). Both are considered among the most beautiful caves in Slovakia.