THREE districts of the Slovak capital Bratislava were picked for beautifying treatment as part of the regular annual community and environmental project called the Green City.
Taking place for the sixth time over three weekends during July and August, students, inhabitants, and expert help gathered in the Old Town, Petržalka, and Ružinov districts to clean the environment and add a bit of green. 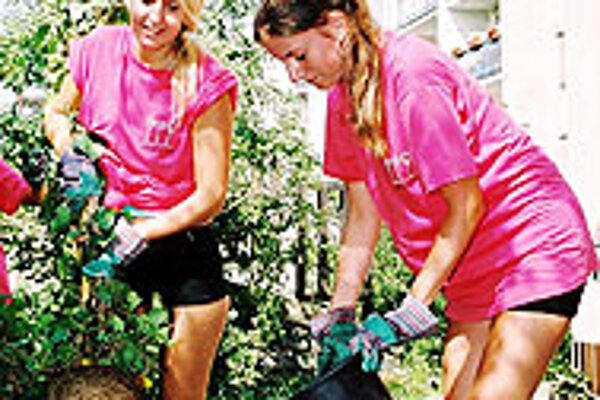 Font size:A-|A+0
THREE districts of the Slovak capital Bratislava were picked for beautifying treatment as part of the regular annual community and environmental project called the Green City.

Taking place for the sixth time over three weekends during July and August, students, inhabitants, and expert help gathered in the Old Town, Petržalka, and Ružinov districts to clean the environment and add a bit of green.

At the close of the event the capital city had 800 new trees and bushes, ivies, creeper roses, yew-trees, and other plants that around 200 people helped to plant. Apart from planting the greenery, people also cleaned green areas near their houses and blocks of flats.

The three districts were picked as a result of a city poll that took place between April and June in which people from all districts were invited to cast their votes this year to have the Green City project come to their area. People from the city's 17 districts could also send in their ideas of what they thought should be done in the districts.

In this year's poll, the Bratislava suburb of Petržalka, notorious for its endless rows of concrete blocks of flats that have earned it the nickname "concrete jungle", received the most votes.

Of the total 1,066 votes, Petržalka got 597. The Old Town received 134, and Ružinov got 132 votes. The districts of Devín, Čunovo, Jarovce, and Rusovce on the other hand, did not receive a single vote.

In the Old Town, work took place in nine areas, and in Ružinov three areas were targeted.

In Petržalka the greening work concentrated on Strečnianska street.

"We were pleasantly surprised by a letter from the inhabitants of Strečnianska, who thanked us for the chance to improve their environment," said Dušan Vávra, Peržalka's vice-mayor.

Along with their votes, people sent 1,074 proposals for the improvement of the environment in the capital city. "Compared to previous years, this is hundreds of proposals more," said Andrej Ďurkovský, mayor of Bratislava.

"Green City encountered positive reactions from people everywhere it went this year. I was not surprised with the reaction in the Old Town, where people helped actively in each of the nine areas.

"People from Petržalka and Ružinov, which were newcomers to the project, also proved their relation to and interest in their own environment," said Ďurkovský.

The Green City started as an initiative between the local municipality and Philip Morris Slovakia concentrating mainly on the improvement of the environment in Bratislava's Old Town district. Later it expanded to other districts as well.

Branislav Hochel, Bratislava's vice-mayor, said that next year the Green City would also be a citywide project. "Just like this year people will be able to, so to speak, demand that the project take place in their city district. It's up to the people."

Miroslava Remenárová, the manager of the Green City project, works for Philip Morris, which has been Bratislava's partner in the project since the beginning. She said that 45 inhabitants helped clean and green the streets in the Old Town, 55 worked in Ružinov, and 50 in Petržalka.

"These are just figures for general orientation because even accidental passers-by joined the work," Remenárová said.

"The project's most important driving power is the people themselves. If they are given the chance to communicate and express their needs and on the other side there is a recipient, which, in this case, are the city districts, we think that is the most important thing. This is how interaction is created between the citizens, state administration, and the industry and firms that are active in the given area," Remenárová said.