The flood of the century, again?

IN JUST a few days at the end of July, a lake of 30 square kilometres gathered in the Zemplín region, the result of the Ondava River running wild. The river reached a level of more than 660 centimetres, exceeding a record of more than 100 years and tearing a rift 150 metres wide in an embankment above the villages of Markovce and Hradištská Moľva. Hundreds were evacuated, many leaving their water supply, the gardens they depend on, and their old and, in many cases, uninsured homes hopelessly exposed. 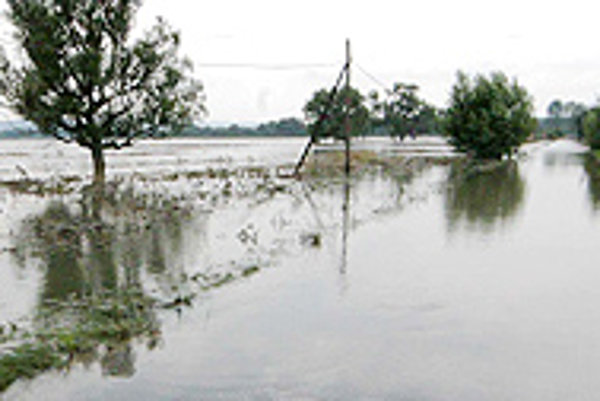 Font size:A-|A+0
IN JUST a few days at the end of July, a lake of 30 square kilometres gathered in the Zemplín region, the result of the Ondava River running wild. The river reached a level of more than 660 centimetres, exceeding a record of more than 100 years and tearing a rift 150 metres wide in an embankment above the villages of Markovce and Hradištská Moľva. Hundreds were evacuated, many leaving their water supply, the gardens they depend on, and their old and, in many cases, uninsured homes hopelessly exposed.

It is August 4, and although the water has already receded and evacuated families have returned to their homes, the view over the fields of the region still resembles that of Šírava, the largest lake in eastern Slovakia. The road to Hradištská Moľva is still nearly impassible and under water.

"We want to go home, too," shouts a voice from a group of Roma sitting on plastic bags in front of the gym near the Maľčice elementary school. On the fifth day after the flood, they want to feel that they belong somewhere. The scream is not persistent; it's just trying to recall a desire. They simply cannot imagine what is waiting for them at home.

There are 70 people in the first group returning home. A military truck, the only vehicle that can make the trip, has to make the journey three times. The oldest inhabitants and the Baláž family go first.

The mayor of Maľčice, Marta Tomková, has everything under control.

Finally, she sits down next to the driver. It is necessary to be on the spot, ready to deal with new problems as they arise.

"The settlement of Hradištská Moľva, a part of Maľčice, was hit hardest by the flood. It is a slowly fading settlement from which young people began to leave in search of work while Roma from the surrounding areas began to buy out the houses. Today, the majority of the population are Roma," says Tomková.

Maľčice has a substantial Roma community. Of its 1,300 inhabitants, about 650 are Roma. As all the Roma legally own their brick houses, although many of the homes are quite old, she doesn't expect any problems with compensation payments to cover the flood damage.

The local government has donated Sk300 (€7.5) to each family to cover basic foodstuffs in the short term.

The people will also need drinking water and to evaluate the extent of the damage.

She thinks that most houses are uninsured, so she will have to look for funds to get help. As it is mostly Roma who have been affected by the flood, as soon as the damage evaluation has been completed, she is going to contact the Office of the Plenipotentiary of the Slovak government for Roma communities.

Božena Balážová, 50, holds her two-month-old granddaughter in her arms. She is waiting for the family to finish their lunch, so that somebody else can look after the baby and she can eat too.

"We have a brick house which was built in the 1940s. I don't know whether we will be able to live there again," she says. Like most other houses here, it was not insured.

"When the floods in the Spiš region started, we went to the Ondava River every day to see if the water was rising. There were a lot of people there who checked the river and said everything was OK. Until the last moment, everything was OK. But then the mayor turned up and told us to pack our things. It was on Saturday [July 30] morning. The embankment was destroyed. We packed our most necessary belongings, and the rescue teams quickly saved the women and children. The men stayed there to stand guard. We left on Sunday when there were fears that the water level would rise even more," recalls Martin Baláž.

He doesn't know what he is going to do after he returns home. He can't imagine to what extent his house has been damaged.

"The garden has been destroyed for sure. The mayor told us that there was nothing for us to eat, and that she had to prevent the outbreak of disease. Everything has to be checked, including water for drinking," he says. In spite of all this, he wants to return.

Before the people got on the truck, they were given one last lunch prepared by volunteers from the Adventist Agency for Help and Development, a charity organisation.

"Altogether, we served meals three times a day, from Saturday to Wednesday, to about 150 people at an overall cost of about Sk40,000 (€1,000) says Pavol Cimerman, the agency's leader.

Before the evacuated people were brought to their homes, Pavol Cimerman distributed food packages.

"We are going to stay here with families that cannot return until the end of the week," says Cimerman.

"The embankment broke at about 9:00," remembers Miroslav Koloži, the head of the fire brigade in Maľčice and a local council deputy.

"We warned people immediately, especially parents with children. The water was rising quickly, and the fire brigade from Michalovce helped us evacuate the local people. But not all of them were willing to follow us... In the evening, there were only men and old people in the village," he says. But on Sunday they called for help. The danger was too great, the electricity was out, and the upper floors of the houses were not safe anymore.

Flooding also hit the neighbouring village of Markovce. As in Maľčice and Hradištská Moľva, Roma houses were the most affected.

In Markovce, 11 houses were flooded and about 200 people had to be evacuated. Here, the Ondava River created a lake of almost three square kilometres, and here too families stayed as long as they could before fleeing. They could only return home after three days.

"Look here, just before the floods we painted the walls. For two days we have been trying to dry it out but I don't know whether we can save it. We have been trying to prepare at least one room that is habitable and to have a place to sleep. We had been quite happy recently; we'd saved some money, but now everything is gone with the water," says Viera Daniš.

She and her husband are both unemployed and they have four children.

"Everything can be fixed but where can we find the money for it?" they add.

Their neighbours, the Kináč family, have a better situation; their house was insured.

A pit in front of his house is filled with mud. Thousand of dead earthworms and insects, brought here by the river, lie around.

Everything that was not taken away by water is piled up, mixed with mud, while the hot sun raises a dirty stench. Dozens of small children are running around.

Some families will spend another night in the temporary shelter in the community house. The room where they stay overnight looks rather like a stall, and it is hard to say if a better place could be found for these people. Sometimes they smile, sometimes they cry, but there is one thing they have in common: helplessness.

The extent of the damage caused by the flood in the Košice region has not been calculated yet. The water has still not retreated to its original riverbed, and it will take at least one week for the situation to calm down.

Questions about how this could happen have already been asked. The excuse of a "flood of the century" is not relevant anymore, as, since 40 people died in Jarovnice in 1998, the so-called centurial waters have been coming more and more often, year after year.

Ján Dolný, head of the Košice Region Flood Commission and the director in the Regional Office in Košice, thinks that the dams at Ružín and Domaša failed to prevent the flood.

In his opinion, the dammed lakes were almost full at the time of the flood, so they could not hold the rush and had to let the water pass through.

"It will be necessary to discuss the system of water level regulation and the rate of flow," commented Dolný.

Peter Stanko, the State Secretary at the Slovak Ministry of Environment, says it was not due to negligence that the embankment broke. He said that the embankment was built about 100 years ago from the material available at that time, and its foundation is of sand and clay without a firm, leak-proof centre. "This happened for the first time, so we couldn't anticipate that the embankment would be des-troyed," said Stanko.

"The damage wasn't caused by human factors. In this case it was the vis majore," stresses Ladislav Podkonický, the director of the Slovak Water Administration company (SVP), responsible for technical and operational issues.

He said that the SVP has to look after 2,500 kilometres of protective embankments and that they did their duty properly. He says a commission of experts regularly checks the embankments, and they had been cleared. "But river embankments are not dams; their construction is different, and they have been built for a temporary load," he explained. He added that the Ondava embankment has never been under such a strong water flow.

Dolný criticised the village mayors in the lowland in the Zemplín region for letting their system of canals become overgrown with weeds and fall into bad condition.

As Stanko said, the extent of the damages caused by the flood is not known at the moment. The calculations should be completed in two or three weeks. The state secretary of the Ministry of Environment expects that the government will help the victims from special budget funds.

He did not say whether or not such compensation has exceeded the investment that was intended to improve flood protection.