Banská Štiavnica - Štiavnické Bane - Počúvadlianske jazero - Počúvadlo - Klastava - Prenčov - Svätý Anton - Banská Štiavnica (50 km).
Surface: paved, light traffic.
Difficulty: medium up to Počúvadlo Lake then more difficult.
Time: about four hours with stops at Počúvadlianske jazero and in Svätý Anton.
BANSKÁ Štiavnica and its surrounding Štiavnické vrchy hills have attracted outsiders for a very long time. In the Middle Ages, the Germans arrived. Then came the Hungarians, followed by Turks and then the Habsburgs. This area obviously had quite a draw, particularly its rich deposits of precious metals. 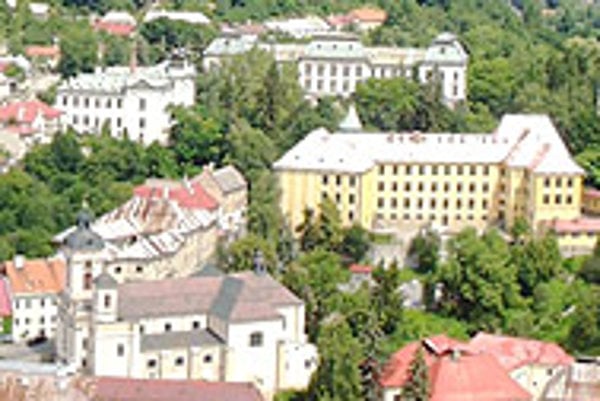 BANSKÁ Štiavnica and its surrounding Štiavnické vrchy hills have attracted outsiders for a very long time. In the Middle Ages, the Germans arrived. Then came the Hungarians, followed by Turks and then the Habsburgs. This area obviously had quite a draw, particularly its rich deposits of precious metals.

Today, the UNESCO World Heritage site attracts a different sort of crowd - tourists. These visitors arrive by bus, train, car, and increasingly by foot and bicycle. They come not for gold, but to discover the town's culture, history, educational institutions, technical marvels, architecture, and natural treasures. I chose to hike and cycle this area and experience these riches on my own.

After my arrival, I checked in to a cosy pension at the centrally located Námestie Svätej Trojice (Holly Trinity Square). On my first day, I decided to explore the stunning landscapes around the town, so I rented a bike in the nearby TANADSPORT bike store (Sk500 or đ€12.50 per day) and got going on the Sitnianska cyklotrasa (Sitno bike route). The route follows lightly travelled roads and is quite hilly, but suitable for all types of bikes and riders. In a few minutes, I reached the municipality of Štiavnické Bane (Štiavnica Mines). It was hard to believe that this quiet settlement was a centre of extensive mining activities during the area's heyday in the 18th century. After 45 minutes of pedalling, I was at Počúvadlianske jazero lake.

One of many reservoirs belonging to the town's sophisticated mining water management system, the lake held water that powered various mining equipment. A unique system of ditches and tunnels supplied these lakes, known as tajchy, from water sources in the highlands. Today, besides drawing technology tourists, these reservoirs serve a recreational purpose. As one family from the Czech Republic told me: "We are spending five days at Hodruša [another lake] because the surroundings are so beautiful, and so much culture and history is nearby."

Although the inviting water in the lake almost begged me to go for a swim or a water bike ride, I had a more ambitious pursuit in mind. I opted instead for a hike up to Mount Sitno, the highest point of the Štiavnické vrchy (1,009 metres). A 45-minute hike takes you to the top of this legendary mountain. The stones at its peak supposedly encase knights: If Slovakia is ever in great peril these knights will once again come alive and save the nation. From an observation tower here, you can see all the way to the Tatras on a clear day.

After making my way down from Sitno, I enjoyed a quiet ride through the peaceful, almost sleepy, villages of Počúvadlo, Baďan, Klastava, and Beluj. Because this ride goes through the valley under Sitno, the wooded areas gave way to wide, golden fields in several spots. Such diversity of countryside added a pleasant variety to the sights. From Beluj the tour continues to Prenčov, where it joins the road back to Banská Štiavnica, passing the town of Svätý Anton with its nicely preserved manor house and tree garden. On the rolling hills, uphill climbs give way to downhill coasts several times - that is what I call a perfect cycling terrain!

Evening found me back in Banská Štiavnica. Because the town lies in the middle of a mountain ring, sunset occurs earlier here than up on the hills. Marked walking paths and hiking trails radiate in all directions straight from the town's centre to the surrounding hills. One only needs to hike a few hundred metres from the town square to get to the countryside. You might consider strolling along the town's higher elevations to witness the magic of late afternoon light playing off the Calvary church and the hilltops while evening is already beginning in the dusky town. Back in the centre, little cafés, restaurants, live music, and other attractions will pull you out into the lamp-lit streets.

By morning, the town is quiet again. I chatted with an English couple while enjoying a sunny breakfast on the terrace of my pension. "This is exactly what we have been looking for," they said. "The town offers a perfect balance of activity and serenity. I would move here right now. Everyone is very pleasant here, but in London, nobody cares."

After an enjoyable conversation, I went for a walk through the town in the company of Ján Roháč senior, a local Slovak guide. Our walk started at the Námestie Svätej Trojice. Houses of wealthy burghers from the 15th century form the square. The town also features five churches and a collection of unique houses constructed on steep slopes. I ran across a group of cyclists loaded with gear who had biked all the way from France. They thought the town looked like Hallstadt in the Dachstein Tauern region of Austria.

From the town centre, we walked up to the Starý Zámok (Old Castle). The old castle consists of a fortress on an elevated terrace. Originally planned as a church site, the threat of Turkish raids in the mid-16th century convinced the city's elders to turn the church into a fortress. Today, the castle houses a museum featuring the area's material culture and history.

Narrow paths then led us to the Nový Zámok (New Castle). This castle was a fortified observation tower, built between 1564 and 1571 as part of a system of guard towers and lookout points along the mountains. Guards in these posts tracked the movements of the Turkish military along the flatlands below. For over 150 years, Ottoman armies tried to conquer Banská Štiavnica and its rich gold resources. While battles occasionally took place right at the city gates, the Turks never reached the city centre. However, every unsuccessful raid was accompanied by widespread pillaging of the city's surroundings. Not only will the castle museum explain the military history of the area, but it also offers wonderful views of the city.

I also recommend a visit to the Mining Museum, especially its mineralogy exposition and outdoor exhibits. Here you can explore a 400-year-old mine and learn more about mining technology. The 1.5-kilometre underground exhibit will take you through mineshafts dating from the 17th to the 19th centuries. The mine tour takes two hours, so if you are claustrophobic, stick to the exhibits above ground.

If military history and mining technology are not your cup of tea, I suggest a visit to the town's botanical garden and arboretum, where you will find exotic trees, shrubs, and plants. These spots are affiliated with the town's numerous educational institutions; during the school year, the town is teeming with thousands of students. Soon after their arrival in early September on the 10th and 11th, the students will participate in a unique Štiavnica tradition - the Salamander festival - honouring the town's rich history. The festival's main event is a costumed procession with numerous floats illustrating the legends, work, and life of the town's inhabitants through the ages. Do not miss it.