The state strikes back

THE DISPUTE over the land intended for the Kia investment marches on. The Slovak government, backed into a corner by landowners' demands and businessman Marián Kočner, who recently bought around 9,000 square metres of the land where the future plant of the car giant Kia is to be built, has changed its tactics: It now plans to expropriate the land. 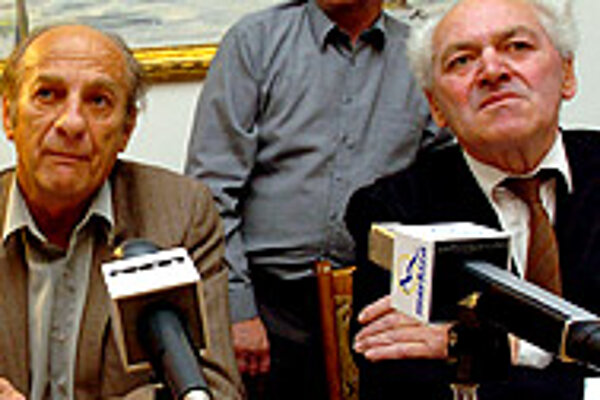 Font size:A-|A+0
THE DISPUTE over the land intended for the Kia investment marches on. The Slovak government, backed into a corner by landowners' demands and businessman Marián Kočner, who recently bought around 9,000 square metres of the land where the future plant of the car giant Kia is to be built, has changed its tactics: It now plans to expropriate the land.

Economy Minister Pavol Rusko, pressed by the deadline for providing the land to the South Korean company, proposed three possible solutions to the cabinet on August 18. The first option was to meet the landowners' requirements and wait for the reclassification of their estates from agricultural to building plots.

The other possibilities were for the state to exercise its domain rights and begin expropriation procedures, or to enter into negotiations with the investor regarding a new location.

The state promised to settle and prepare the land for the plant by the end of August. Of the total 220 hectares, the state still needs to obtain 40 hectares of land.

Rusko said that land expropriation was still the best choice of all the bad options available to complete the investment deal near Žilina.

The cabinet ministers agreed that all the conditions had been met for expropriation to take place.

"No one in the government is happy with having to resort to expropriation. It is the most complicated solution, but unfortunately it is also the most realistic solution so far that will keep the investment in Slovakia," Rusko told journalists after the cabinet meeting.

On June 7, Rusko had already warned the landowners that the state would exercise its domain rights to start expropriation procedures unless they would be willing to agree on a compromise with the cabinet.

One day later, the petition committee representing the landowners accepted the conditions under which the purchase price would be set at the maximum price chosen from the assessments of three independent land value experts. Until then, the price was to be set at the average price determined by expert estimates. The agreement was fragile, however, and did not survive.

In early August, Kočner, who in 1998 tried to take over the private TV broadcaster Markíza, founded by Rusko in the mid-1990s, entered into the land dispute picture.

Kočner became a member of the petition committee for the landowners. He said that it was his gripe against the arrogance of power, and not profit, that drove him to buy the land of some of the disgruntled landowners. He also added that his involvement was not motivated by his past conflicts with Rusko who, in 2002, had to pay him tens of millions of crowns to settle the Markíza affair.

Beating the running state offer, Kočner's Gamatex Plus, a limited liability company, bought the land for Sk295 (€7.38) per square metre.

"It shows that the land has become a subject of speculation. Everyone is trying to get rich off of it and blackmail the state," Rusko said in response to Kočner.

Rusko still worries though, that the critical delays may drive the €700 million investment away from Slovakia.

The landowners are determined, however, to use legal means to achieve a sale price of Sk300-350 per square metre. They are likely to seek assistance from the legal office of Fedor Flašík, who has strong ties with the opposition party Smer.

Dušan Mikulík, chairman of the landowners' petition committee, told news wire TASR that expropriation is legal only by matching the market price, adding that this price will be clear after a new expert's report is produced next month. The sales to date involving some 80 percent of the needed property have so far averaged between Sk105-140 per square metre.

In the meantime, Kočner maintains that the expropriation of the Žilina land for Kia is impossible and that if the state takes the land, he will even take the case to international courts.

On August 18, Hungarian Coalition Party (SMK) leader Béla Bugár said that his party had doubts as to whether it was possible to expropriate the land for the Kia plant. Bugár also doubted whether the investment was in the public's best interest, as Kia is a private company.

The Slovak constitution stipulates that expropriation or forced limited ownership is possible only as an unavoidable measure made in the interest of the public and for an apposite compensation.

"The 1999 law on supporting important investments says that a strategic investment is a site intended for production, the construction of which is secured by a corporate entity based in Slovakia and meets the following criteria: 1 - the volume of the investments should reach at least Sk1 billion (€24.8 million), 2 - the planned volume of production or the employment are important for the national economy, and 3 - the cabinet has decided that the investment is in the public's interest," Viliam Karas, a lawyer with ULC Čarnogurský, told The Slovak Spectator.

"If the investment meets these parameters then it meets the legal conditions for the Economy Ministry to issue a certificate for an important investment, which serves a basis for the expropriation procedure. Without such a certificate, the state cannot expropriate land for a private investor," he added.

The French auto giant PSA Peugeot Citroen, which is constructing a new €700 million factory in the western Slovak town of Trnava, 45 kilometres northeast of the capital, Bratislava, has been able to manage its land purchase without any major hurdles.

Alain Baldeyrou, general manager of the Peugeot Citroen Trnava Project told The Slovak Spectator earlier this year that his company had to purchase 192.13 hectares.

"The purchase of the land for the construction [of the factory] was completed in September 2003, and 257 landowners were involved," Baldeyrou said.

The land that will serve as the site for the future industrial park near the PSA plant is currently being wrapped up.