Give in to resistance

MARTIN Homola walks the streets of Bratislava like a ghost from the past. An active member of the alternative music scene in Czechoslovakia in the early 1990s, he was a member of the well-known Jesus Underground Band and organised the first two years of the annual Slovak Alternative Summer festival, the largest such festival in the country at that time. Then he left for London, returning only once in 10 years. Back in town again, he has decided to make his second visit a noisy one. 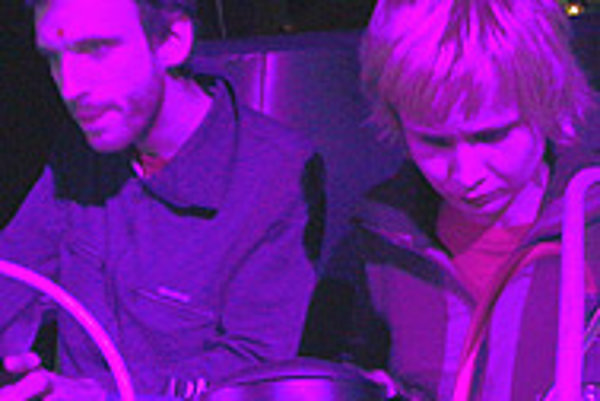 Font size:A-|A+0
MARTIN Homola walks the streets of Bratislava like a ghost from the past. An active member of the alternative music scene in Czechoslovakia in the early 1990s, he was a member of the well-known Jesus Underground Band and organised the first two years of the annual Slovak Alternative Summer festival, the largest such festival in the country at that time. Then he left for London, returning only once in 10 years. Back in town again, he has decided to make his second visit a noisy one.

Homola is the main organiser of Resistance, a festival of alternative culture - really alternative culture. For three days from August 27 to 29, around 50 musicians from across Europe will gather at Bratislava's Zrkadlový háj culture house to play the latest in digital hardcore, industrial, and noise - music intended to provoke the mind and the ear.

Homola said he hoped the festival, one of the biggest and only of its kind in Europe, would inspire people to question mainstream culture and look beneath its glossy surface.

Headliners include Panacea, a German DJ and producer long famous for his brutally hard drum 'n' bass. His forceful beats will certainly not be alone at the festival, but there will be more variety to the music of these three days than the genres listed above might first suggest. The last album of Oil 10, a French headliner, for example, is aimed closer at the dance floor, with beats that have dark but punchy melodies and new wave undertones.

Though the festival will showcase well-known names from western Europe, it also features musicians across eastern Europe, a region whose experimental and non-commercial electronic music is often ignored.

Exciting guests include Ukrainian Andrey Kiritchenko, who assembles droning ambient sound environments and crisp, glitchy beats in his various projects. Though they have a dark side, these tend to be delicate rather than assaulting. The Czech Republic's Neutrino and Selectone will likely play something akin to their last split album, Rhizomatic Sound, which uses cut up musical samples and found sounds to make melodies and beats that are surprisingly warm. The Polish artist Deuce, one of the highlights of last November's NEXT festival, is certain to put on another riotous act to accompany his madly inventive music.

The Slovak Spectator caught up with Homola in Bratislava to find out just how Resistance came together.

The Slovak Spectator (TSS): Your website says this festival is an attempt to resist "capitalistic monoculture and behaviour". What does this mean to you?

Martin Homola (MH): I don't take this music like you go to a rock and roll gig and you have a couple of beers and you get drunk and you think "yeah this is a cool band" and there are some girls around. Personally music means everything and music is my weapon to basically show people there is a different world somewhere behind this world that is sold to us or made for us.

TSS: How can music be used as a weapon of resistance?

MH: I don't really want to say weapon because I believe that if you really use a weapon against somebody this is a last resort. I am sure there are many different ways that the situation can get onto the right track. I don't know all the answers but I am sure that if people work together there will be plenty of answers and future answers as well.

In my 20s I was quite heavy into techno and at that time techno was quite progressive music. Techno parties were quite different from how they are today.

Today you go to a posh bar in Bratislava and you hear techno music. Unfortunately, what I always think is that the business culture finds something that is developing in the right direction, sucks up its good aspects, and makes its own version with neutralised songs and culture for people so they are not disturbed or made to think about something else, only "hey, I feel quite good today, there are quite good songs on the radio, well my life feels quite ok". This is not the direction I want to go in. Even if I'm disturbing you, maybe you can think why this song disturbs you and why the other one didn't.

TSS: Why did you decide to have the festival in Bratislava?

MH: I had two possibilities - to get the festival done in London and to do it here. It would be easier in London because places are set up for this music.

I don't want to say, "hey, I belong to this country", but I like this country very much even if it has lots of bad sides to it. In London there are bits and pieces every week where somebody does some gig; but there is no such festival in eastern or even western Europe.

There are only three festivals like this. One is in France and one is in Germany, and I have never heard of any as big as this one in this part of Europe. I wanted this festival to be something special, where I can bring out all the really heavy industrial music hidden from the mass media, which have absolutely ignored this culture.

TSS: A lot of the artists are from eastern Europe. Did you do that on purpose?

MH: Yeah of course, as I say, I was born here and it doesn't mean that because I disappeared I feel nothing. I can never get over how much ignorance there is between the West and East, it makes me really, really crazy. They have no idea where Slovakia is or who you are. I believe that even in Bratislava I could find one pop band that could be number one in the [world's] top 10, even today. But it never will, never; they are simply an east European band, and if a mafia geezer doesn't buy the radio station in London, they will never ever be pop stars.

Resistance will take place August 27-29 at Zrkadlový háj, Rovniankova 3, Bratislava. Music starts at 12:00 each day and ends at 5:00 the following morning on August 27 and 28, and at 2:00 on the last night. Tickets cost Sk400 for three days, Sk150 for one. See www.resistancefestival.com for more information.