This baby's in a corner

Dirty Dancing: Havana Nights
Starring: Diego Luna, Romola Garai, Sela Ward, John Slattery, Jonathan Jackson
Directed by: Guy Ferland
Running time: 86 min
Rating: 4 out of 10
WHETHER Freud actually said "sometimes a cigar is just a cigar" doesn't matter. What does matter is that it's true: As anyone who relishes a good smoke will attest, the enjoyment of puffing on a fine cigar is not something that one can get while sucking on any old phallic substitute. 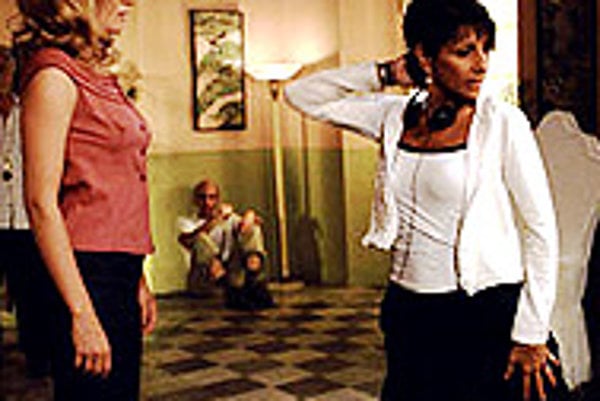 WHETHER Freud actually said "sometimes a cigar is just a cigar" doesn't matter. What does matter is that it's true: As anyone who relishes a good smoke will attest, the enjoyment of puffing on a fine cigar is not something that one can get while sucking on any old phallic substitute.

To aficionados, the art of the fine cigar seems to begin, and end, in Cuba. In addition to superior quality, it's likely that part of the attraction comes from unattainability. Because Cuba has been relatively isolated since the beginning of communism, the country's cigars are often hard to come by. Thus, they're not only celebrated, but also forbidden and exotic.

To most Westerners, this is also true of Cuba as a whole. They know about the country only through the mass media's portrayal of it: hot, colourful, musical, and full of stereotypically sexual dancing.

Sometimes a dance is just a dance. But, as any film buff knows, in the movies, it's often something else as well. Back in more innocent times, before sex could be shown or explicitly discussed on screen, filmmakers had to create ways to represent it. Two people lying down, smoking cigarettes, meant sex had just occurred. And dancing often meant sex, or at least desire.

But, with a movie like 1987's Dirty Dancing, starring Patrick Swayze and Jennifer Grey, it was all of the above. The dancing was overtly sexual, and therefore about desire, but it was also foreplay for the sex scenes that would eventually come. This is also true of Dirty Dancing: Havana Nights.

The move from the original's upstate New York location to Havana tries to up the sexual ante, but what it really does is romanticise Cuba. Seemingly, every pastel-coloured street corner holds sweaty people singing and dancing. It is through them, and in particular through Xavier (Diego Luna), that Katey (Romola Garai), a shy, bookish American, learns to let go and truly experience life.

This would theoretically be fine if the circumstances were more similar to the original movie. The basic plots are the same: Wealthy girl meets poor boy. She's attracted to his illicit dancing. They begin dancing together, but soon do more than just dance. Family and friends find out, disapprove, and the liaison looks doomed. But, you know, love and dance conquer all.

Havana Nights complicates things. Rather than mining the drama found in issues of class and family conflict (as the first did), it tries to incorporate racism and politics: It's set during the revolution that brought Castro to power. Yet, content to simply touch on race and use violence as a vague backdrop for the loving and dancing, the movie only exposes the shallowness of its representation of Cuba.

Let's be clear: Dirty Dancing is no great movie. But it's fun. Havana Nights, by contrast, has no gleefully over-the-top moments like "Nobody puts Baby in a corner" or Swayze leaping off a stage in slow motion. Luna and Garai, though likeable and pretty, fail to generate the weird sexiness of Swayze and Grey.